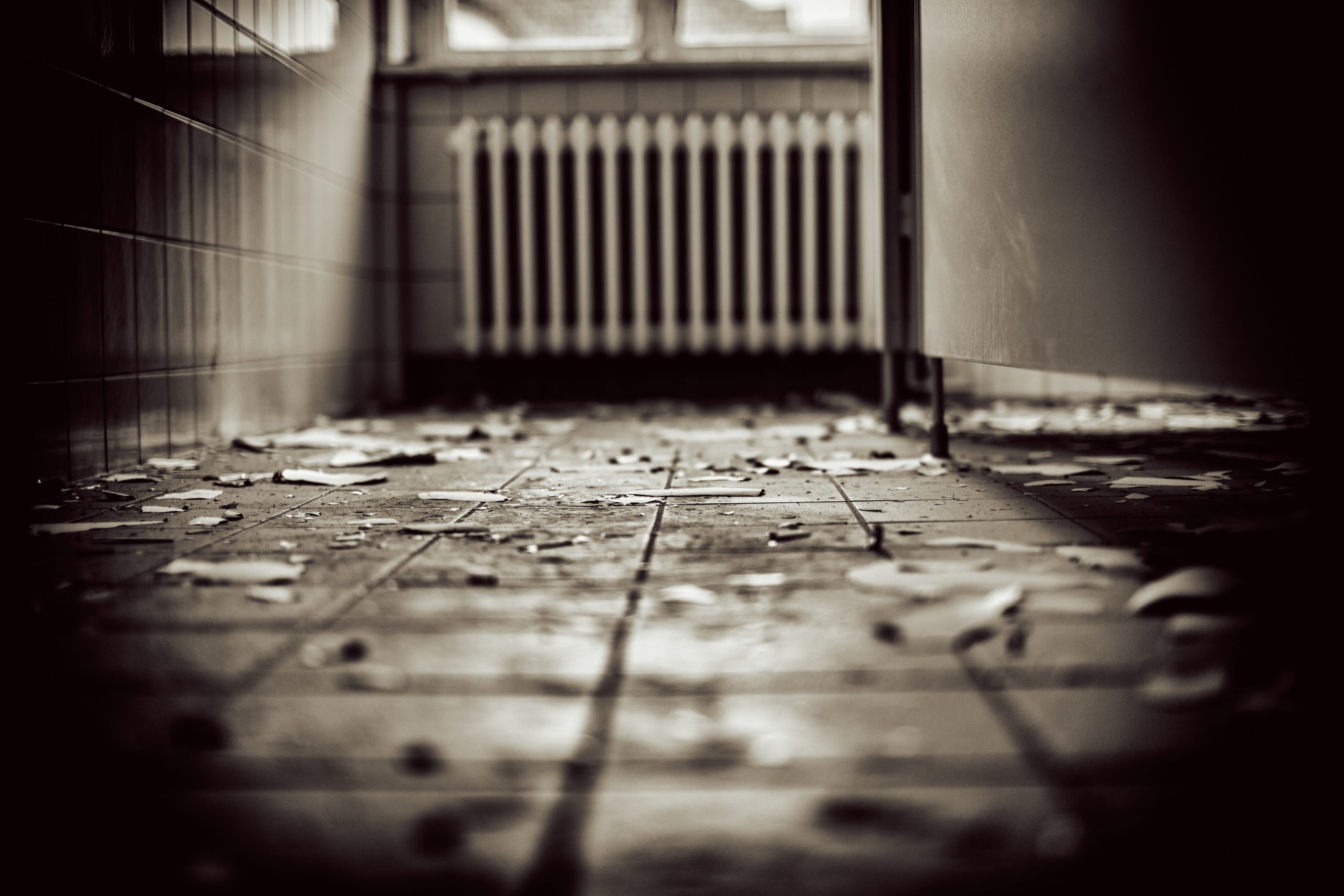 Reports of subject proliferated around São Paulo during the 1970s — specifically 1978, according to some reports — but a historical event frequently cited as subject’s moment of origin dates subject to the late 19th/early 20th century. Additionally, yet another tale passed around as subject’s origin is dated 1944.

Whether any of these dates is accurate — or whether they even all refer to the same entity — has not been determined.

Appearance: Subject, known as “Loira do Bonheiro” (literally, the Blonde of the Bathroom), appears to be the apparition of a young woman with blonde or white hair, dressed in white and with cotton stuffed in her nose, ears, and/or mouth. Blood may or may not appear to be streaming from her eyes, and she may or may not have a variety of cuts and contusions across her face and arms. She may be seen in any number of specific places, including lurking in stalls or appearing within the reflection of a mirror; the common thread between each of these places is that they are always located inside a bathroom — typically a school restroom or other public restroom.

Modus operandi: Subject typically lies in wait until an appropriate target presents itself. When said target has entered subject’s domain, subject may either choose to appear of her own volition, or appear as a direct result of having been deliberately summoned by target.

Should subject choose to appear of her own volition, targets need do nothing more than enter the restroom in which subject resides. She will then present herself to target, either to plead for help or to frighten or threaten target. She may or may not turn on the taps in the sink as part of this appearance.

Should targets wish to summon subject directly, however, several methods may be employed to do so, once target has entered subject’s restroom:

Other methods may exist which currently remain undocumented; additionally, variations on documented methods my exist, as well. For example, although three is a frequently-cited number for any repetitious actions which must be performed to summon subject, repetitions numbered either more or less than three may be required, depending on the source.

Note: It is not recommended that subject be summoned deliberately. Although there is no indication that subject actually harms targets, the two responses targets who encounter subject typically have — either not being able to remember what happened to them during the encounter, or never, ever being able to forget subject’s terrifying face — are… not enjoyable.

Precisely what subject’s goal or goals might be with regards to appearing to targets remains something of a mystery. According to some reports, she may ask targets for help in removing the cotton from her nose, ears, and/or mouth; however, should targets do so, blood may begin pouring from these orifices, startling targets enough to compel them to vacate the restroom immediately. She may also request aid in turning on the taps of the sink; her predilection for the taps reportedly has something to do with the fact that subject suffers from constant dehydration. (See: Additional notes.)

But according to most reports, subject simply appears — that is, after she materializes, she does nothing else. It is possible she only wishes to frighten targets for her own amusement — but perhaps she simply wants to be left alone. After all, what better way is there to guarantee your own solitude than to ensure that no one will ever want to invade your home in the first place?

Containment: No known containment methods exist, other than simply never entering a restroom in which subject is known to have been seen.

However, even this containment method is not guaranteed. (See also: Recommendation.)

Additional notes: Several possible candidates have been cited as subject’s true identity. (CW for mention of violence against women and suicide, re: Candidates B and C):

Candidate A is a 15-year-old student who regularly cut class by hiding out in a school restroom. This candidate is believed to have suffered some kind of accident or injury during one such class-cutting session; she may have slipped and hit her head, or somehow cut herself in some way. Whatever the details, she is said to have died of injuries, and subsequently “haunts” either the location in which she died, or other locations similar to it.

Candidate B is a married teacher who fell in love with a student. The teacher became the victim of intimate partner violence at the hands of her spouse once he discovered she no longer loved him. The crime is said to have been carried out in a restroom located in the school at which the teacher was employed.)

Candidate C is a former student of the Instituto de Educação Canadá in the Santos Metropolitan Area of São Paulo. Opened in 1934, the school was the first public school to operate in this region. In 1944, however — 10 years after the school first opened — a 15-year-old student allegedly died by suicide in one of the school’s restrooms. (Note: Although the Instituto de Educação Canadá does actually exist, there does not appear to be any record confirming that Candidate C did.)

Candidate D is Maria Augusta de Oliveira Borges. Born on Dec. 31, 1864 in the Guaratinguetá municipality of São Paulo, Maria was the daughter of Francisco de Assis e Oliveira Borges, Visconde de Guará (Viscount of Guaratinguetá). Her father married her off, much to her chagrin, at the age of 14 to Francisco Antonio Dutra Rodrigues, a man 20 years her senior. Unhappy with the arranged marriage, she enacted an escape: On  March 25, 1884, when she was 18 years old, Maria gathered up her jewelry and fled to Paris with it. She lived there until her uncommonly early death at the age of 26 in 1891. The cause of death remains unknown, due to the loss of her death certificate; however, some sources posit that she had contracted rabies and died as a result.

Maria’s remains were transported back to Brazil via ship. During the transportation process, however, her remains were badly disturbed; thieves broke in and took her jewelry, which had been packed alongside her. Her death certificate was lost at this time.

Upon arrival in São Paulo, Maria’s body was displayed in a glass bell jar in her family’s home, the mansion of the Visconde de Guará, for several days before she was entombed at the Cemitério dos Passos in Guaratinguetá.

In 1902, the mansion of the Visconde de Guará was converted into a school. However, the school mysteriously caught fire in 1916 and was subsequently rebuilt. Both prior and after the fire, students periodically reported hearing strange noises within the school and witnessing the taps running in an otherwise empty restroom.

Several curious details may be noted about the story of Maria Augusta de Oliveira Borges: First, an employee at the mansion of the Visconde de Guará allegedly reported witnessing a mirror in the home shatter at the moment Maria passed away — despite the fact that Paris is nearly 10,000 kilometers away from São Paulo. Second, during the period prior to Maria’s interment, several witnesses allegedly reported seeing her asking them to let her out of the bell jar, even though she was no longer among the living.

And lastly, if Maria did, in fact, die of rabies, this may explain why subject, when encountered within a school restroom, is so intent on turning the taps on in the sink: The classical diagnostic manifestation of rabies, hydrophobia, prevents patients from being able to swallow liquids. Dehydration is a common consequence of hydrophobia — and, what’s more, the spasmodic contractions and choking that can arise from hydrophobia can be the direct cause of death in rabies patients.

Candidate D is an actual figure whose existence is well-documented by the historical record. For this reason, Candidate D is generally cited as the candidate most likely to be the true identity of subject.

Subject bears several similarities to two previously-discussed subjects: Bloody Mary and Hanako-san. Indeed, as some have noted, it is possible that subject’s current may, in fact, be a result of Candidate D’s story merging with elements of at least one of these subjects’ stories: That is, subject may originally have be born of Candidate D’s story, whose modus operandi originally involved simply roaming the hallways of the Escola Estadual Conselheiro Rodrigues Alves, begging for water to slake her rabies-induced thirst and occasionally turning on the taps in the school’s restrooms — and then gained elements of the reports associated with the subject known as Bloody Mary (the summoning ritual, etc.).

Alternate monikers for subject include “Loura do Fantasma” (the Phantom Blonde), “Loira do Espelho” (the Blonde of the Mirror), “Mulher do Cotton” (the Cotton Woman), “Moça de Branco” (the Girl in White), and “Noiva de Branco” (the Bride in White).

Concerning the Loura do Fantasma moniker: Subject may or may not be related to a legend that reportedly circulated around the city of Curitiba,   more than 400 kilometers south of São Paulo, in 1975 which also went by this name. Although this Loura do Fantasma shares a name with one of subject’s alternate monikers, she is not what is colloquially referred to as either a “bathroom ghost” or “mirror spirit,” but rather a Vanishing Hitchhiker.

Recommendation: Do not enter any restrooms — especially public restrooms and/or those located inside schools — in which subject has been previously witnessed.

However, even if subject never has been seen within a particular restroom, do not assume she I incapable of appearing there.

In other words: It is possible that nowhere is safe from her.

Blonde in the Bathroom.

Mysterious Death Inspired Legend Of The “Blonde Of The Bathroom” In Guaratinguetá (Portuguese. Note: Portuguese sources may be translated via Google Translate or the “translate” function of Google Chrome).

Discover The Real Stories That Inspired The Legend Of The Blonde Of The Bathroom (Portuguese).

The True Story Of The Blonde Of The Bathroom (Portuguese).

Discover The Origin Of The Blonde Of The Bathroom Mystery (Portuguese).

What Is The Origin Of The Legend Of The Blonde Of The Bathroom? (Portuguese).

Maria Augusta – The Daughter Of The Viscount (Portuguese).

Legend About The “Blonde Of The Bathroom” Is Research Topic (Portuguese).

The Case Of The “Phantom Blonde” Who Scared Curitiba In 1975 (Portuguese).