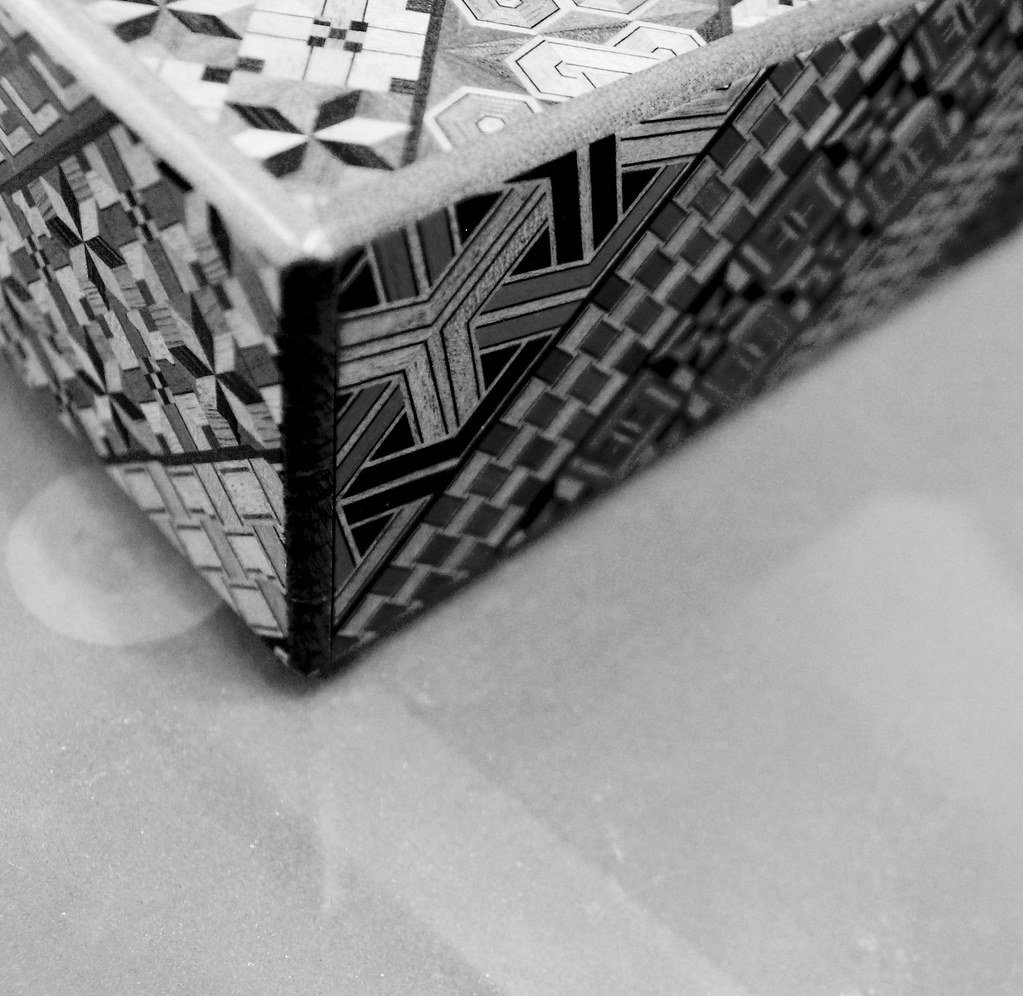 Appearance: Subject, known as kotoribako, appears to be a small, wooden puzzle box measuring about 20 square centimetres. Subject’s surface may be inlaid with an ornate or elaborate design, also made of wood, which may help conceal subject’s opening mechanism. Targets or others who have encountered subject has described it as appearing to be built out of wooden Tetris blocks.

Subject is difficult to open by design. However, should one understand the mechanism by which subject opens, it may be found that subject actually opens quite easily.

(It is not recommended that subject ever be touched, let alone opened.)

More than one variety of subject exists. Each version of subject is adorned with a specific symbol indicating its variety.

Subject should NOT be mistaken for a standard 秘密箱,or “secret box,” of the type commonly offered as a souvenir from the Hakone area of Japan.

Do NOT, under ANY CIRCUMSTANCES, attempt to take subject home as a souvenir.

Modus operandi: Subject has been imbued with a powerful grudge-curse which, when placed within the presence of those fitting the demographic of its specified targets, will literally tear targets apart from the inside out. More precisely, targets will experience their internal organs shredding themselves into thousands of pieces, accompanied by the vomiting of blood and excruciating pain. When subjects are freshly-made, targets will expire within 24 hours of exposure to subject, if exposure during that period is constant.

Subject is at its most potent soon after creation. Over time, the efficacy of subject decreases. The length of time subject remains effective depends on an individual subject’s variety.

No matter how much time it takes, however, expiration after exposure to subject is not — is never — a pleasant death.

Targets are not required to physically touch subject to experience the effects of subject. Targets must simply occupy the same space as subject to fall prey to it.

Subject specifically targets a) children and b) adults capable of bearing children.

Subject is perhaps best thought of as a weapon; after all, subject is a human-made device.

Targets are only exposed to subject when subject is deployed by humans.

Subject only exists because of humans.

Subject only exists to cause pain to other humans.

Subject only exists as a method by which one may take vengeance against those which have done one wrong.

Containment: A complicated containment method was developed early on by those responsible for the creation of subject and subject’s ilk.

Subject should be stored in a dark, damp environment and kept away from any children or child-bearing adults. If it is determined that subject is no longer necessary or that subject has become a danger not simply to those against whom subject is wielded, but to those who wield it themselves, subject is to be taken to a shrine dedicated to a specific deity whose title has been redacted here for safety reasons. This shrine has been entrusted with the purification and disposal of all varieties of subjects.

Several generations ago, the creators of subjects determined that subjects as a whole were too dangerous to continue using; however, at the time, subjects were still too potent for the shrine entrusted with their purification and disposal to carry out the required rituals to neutralize subjects. Accordingly, they enacted the following containment procedure:

Each subject has been assigned by a priest of the shrine to a group of three to four families. The heads of each family’s household take turns guarding subject and keeping the rest of their household safe from it while waiting for subject to weaken enough to undergo purification and disposal. Whenever subject passes from one family to the next, the head of that household carries the responsibility of guarding subject for the duration of their life.

The current heads of each household MAY NOT speak of subject to any other members of their household. Other members — particularly children and child-bearing adults — must be kept unaware subject’s existence.

This cycle repeats for as many years as necessary, as determined by the shrine, in order to weaken subject. When subject’s timer is up, subject may be taken the shrine for purification and disposal.

Each family MUST take their turn guarding subject.

Groups of families’ heads of household may only speak of their specific version of subject amongst each other.

No family group should have any knowledge of any versions of subject but their own.

Additional notes: All varieties of subject came into being during the early years of the Meiji era of Japanese history. During this time, a particular village located in Shimane Prefecture housing a group of heavily persecuted people saw the arrival of a stranger. This stranger may have been fleeing an uprising in the nearby Oki Islands, although virtually nothing about the stranger’s history either before his arrival in the village or after his departure is known.

The villagers initially weren’t keen on taking in the stranger; they feared increased persecution by their oppressors if they did. However, the stranger told them that if they helped him, he would teach them how to make a powerful weapon to use against their oppressors.

They agreed. And the stranger instructed them in the creation of subject.

The first step in the creation of subject is the building of the box.

After the box is built, it is filled with the blood of an animal and allowed to sit, undisturbed, for one week. The animal bled for this purpose must be female.

The box is then fitted with a lid.

After the box is complete, it must be filled. And in order to fill the box, a great sacrifice must be made: Children must die.

Or, perhaps more accurately, many great sacrifices must be made — one child; one sacrifice. Anywhere between one and eight sacrifices may be used to create a single box, with particular item or items from each sacrifice being added to the box’s contents once the sacrifice is complete.

The item or items taken from each sacrifice and used to fill the box depends on the sacrifice’s age. For safety purposes, these details have been omitted from this report.

As previously mentioned, subject comes in different varieties and different potencies. These varieties and their corresponding potencies are determined by the number of sacrifices used to create any given subject. Accordingly, the varieties are referred to as follows:

It is unknown precisely what these names mean. The number of sacrifices used to create each variety appears to be a part of that variety’s name; furthermore, one person knowledgeable on the subject has theorized that Ippou and Nihou contain a syllable (“hou”) that resembles the word for “sealing” in Japanese, while Hakkai contains a syllable (“kai”) which resembles the word for “opening.”

As previously noted, each variety is indicated through the placement of a specific symbol denoting said variety on the surface of subject. The more sacrifices involved in the creation of any given subject, the stronger and more potent that particular subject will be.

It is NOT RECOMMENDED that subjects requiring eight sacrifices be created. Only one such subject has been known to have been created; the stranger made its creation a term of his deal with the villagers, along with the stipulation that they were never, ever to make another Hakkai-variety subject themselves.

The whereabouts of this subject are currently unknown.

Where or how the person responsible for instructing the villagers in the creation of subjects learned to create subjects himself is also currently unknown.

To return to the history: The villagers used their collection of subjects, made over the course of 13 years, to strike back at their oppressors and dictate the terms of their own freedom. However, following an incident in which one of these subjects caused the deaths of a household of villagers themselves, the villagers determined that the collection of subjects was too dangerous to continue using. Accordingly, they enacted the containment procedures detailed above.

A first-hand account of what targets may expect upon coming in contact with subject was shared over a period of several days in early June, 2005 on the Japanese message board 2ch. The writer of this series of posts described the discovery of one subject, and everything that occurred following it. Much of what is known about subject is contained within these posts, thanks to subject’s friendship with a priest of the shrine entrusted with the purification and disposal of subject.

Subject’s location of origin may be gleaned from these 2ch threads. Many 2ch users attempted to discern exactly where the writer of the threads was based — but although the writer asked that other users stop trying to figure this out, they did note that while they weren’t located in Yamaguchi Prefecture, they weren’t too far away. Additionally, the writer provided one solid hint: It was the area of Japan that refers to the month of October — widely called Kanna-zuki (神無月) by its traditional title, Kamiari-zuki (神在月). The area of Japan that still uses this particular appellation — Izumo —is located in Shimane Prefecture.

The largest number of subjects that has existed at any given time is 16. This collection comprised six Ippou boxes, two Nihou boxes, five Gohou boxes, and three Chippou boxes.

It is unknown whether those two boxes have since been purified and disposed of.

Waiting until they might be considered useful once more.

Recommendation: Do not approach any variety of subject.

Do not touch any variety of subject.

And above all, do not MAKE any variety of subject.