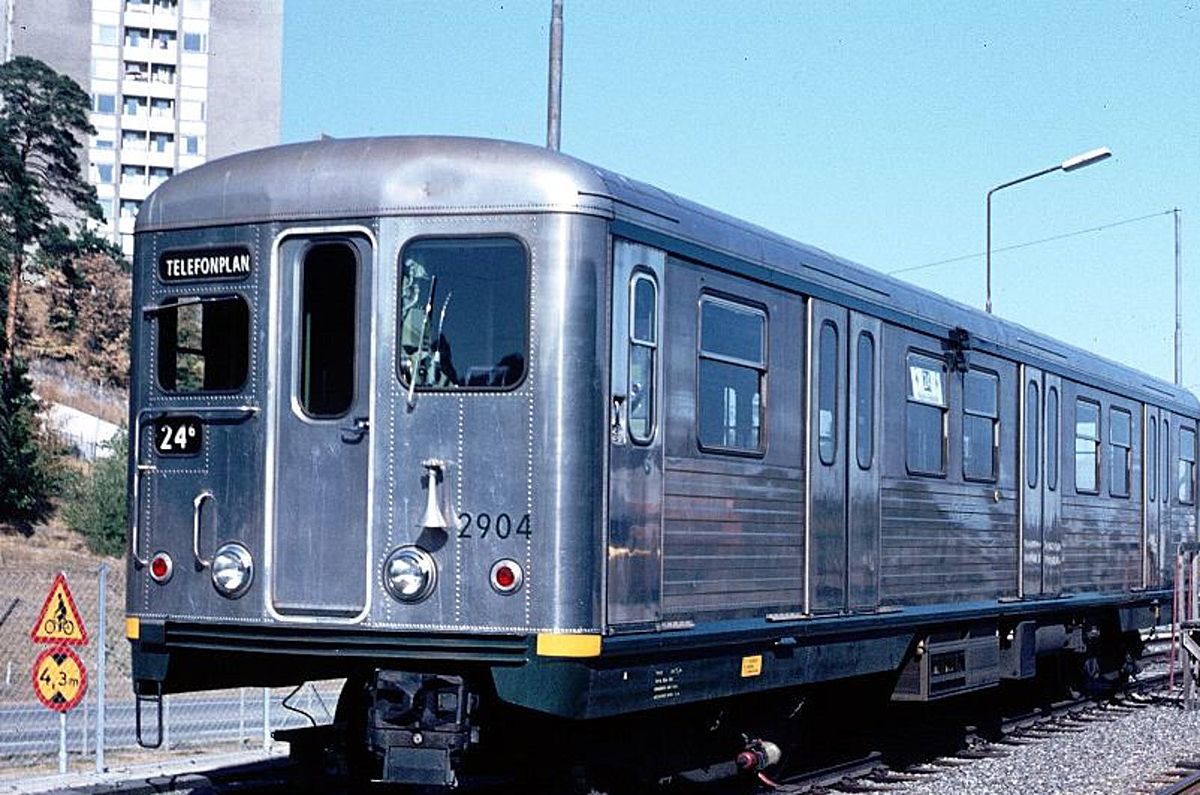 Appearance: Subject appears to be a silver-colored, eight-car, C5 model train running on the Stockholm Metro rapid transit system in Stockholm, Sweden. Constructed of aluminum by the Swedish company Hägglunds, subject’s cars differ from the other train car models on the Stockholm Metro in several ways: First, due to the material out of which they are constructed, their manufacturing costs are significantly lower (and look it); second, their doors slide open from the outside of the train, rather than the inside, allowing for a greater passenger capacity; third, the interiors are unadorned, containing no advertisements or other décor; and fourth, at the time subject appeared, they were the only unpainted silver cars in use on the Stockholm Metro, whose train cars were otherwise painted green.

The overall impression is futuristic, but utilitarian — and almost dystopian.

Modus operandi: It is unknown what may prompt subject to appear; it has no set schedule, remaining unseen for long stretches of time before suddenly rolling into a station at an odd or unusual hour. According to some reports, it only appears late at night — typically after midnight — although others differ on this point. Some reports additionally state that subject stops at a station only once a year, although again, not all reports agree on this fact.

On the subject of stopping, precisely where subject may stop, if at all, is also up for debate. Some witnesses report that subject may only be seen by track workers in abandoned or disused tunnels along the Stockholm Metro’s three lines and seven routes — that is, that it does not stop at all, but instead simply travels the Stockholm Metro in perpetuity. Other reports maintain that, even if subject does not stop, per se, it may be seen passing through stations at high speeds from time to time.

Many reports do, however, state that subject may slow upon a station, stop, and open its doors from time to time, presumably in an attempt to lure subjects aboard. The passengers already aboard subject — either observed through the windows as subject passes by, or seen as subject stops and opens its doors — have been described by potential targets as bearing “expressionless, vacant looks” upon their faces or otherwise appearing to be “living dead.”

Reports vary as to subject’s precise behavior after picking up its unfortunate passengers. Some note that, should a target board subject, target will simply “travel and travel and travel and never get out.” Others, however, state that subject travels only to one station, Kymlinge (see: Additional notes). Yet, according to still others, targets may eventually disembark — only to find upon stepping off the train that days, weeks, months, or even years have passed since they first got on.

It is unknown precisely how or why subject might select targets, or what its primary goal may be.

Containment: Subject was decommissioned and taken out of circulation by the Storstockholms Lokaltrafik (SL), which owns the Stockholm Metro system, circa 1995-1996. Subject’s cars were subsequently split up, with half of one car now residing at the Stockholm Police Academy for use as a training set, and a second full car being stored at the headquarters of Hägglunds.

Where the remaining six and a half cars may be remains unknown.

The possibility remains that subject continues to travel the rails in a… less corporeal form.

Additional notes: Subject’s original physical form was created as a test model. Put on the tracks in 1965, it was intended to offer a cost-efficient means of expanding the Stockholm Metro. Public response to the unfinished-looking silver train was not positive, which, combined with its relative rarity (as just one of several hundred trains, it was seen and used only occasionally), may have led to the growth of the legend surrounding it.

It is unknown, however, precisely when or how the tales told about subject’s original form came into being. Over time, however, subject gained its current reputation — and a new name. along with it: “Silverpilen,” or the Silver Arrow.

Subject is sometimes mentioned in the same breath with a particular station on the Stockholm Metro: Kymlinge — which, although a separate entity, is sometimes believed to be bound up within subject’s lore. A ghost station, Kymlinge was conceived of in the early 1970s as part of the planned blue line, bringing servive to the area primarily occupied by a nature preserve between the Hallonbergen and Kista stations. However, the station was not completed, and when the blue line opened in 1975, it opened with the unfinished remains of this station lurking beside the track.

It is said by some that “Bara de döda stiger av i Kymlinge”—“only the dead get off at Kymlinge.” It is for this reason, perhaps that many believe Kymlinge to be subject’s primary destination — or, perhaps, its home.

Subject has not been seen in its original, physical form on the Stockholm Metro since the mid-1990s. However, the persistent beliefs about subject suggest that, somehow, it still manages to traverse Stockholm’s rapid transit lines even now.

Subject’s relationship (if any) with other PVs, including the Wandering Bus and the Yellow Volkaswagen, has not been determined. It is possible that these PVs, as well as any others found in various parts of the world, may all be part of one, larger, non-corporeal transit system. Further study of this line of inquiry is recommended.

Recommendation: If subject pulls up before you — at any time, but especially late at night — don’t get on.

You may never get off again.

The Ghost Train of the Stockholm Metro.

The Art and History of the Swedish Metro: The Blue Line.