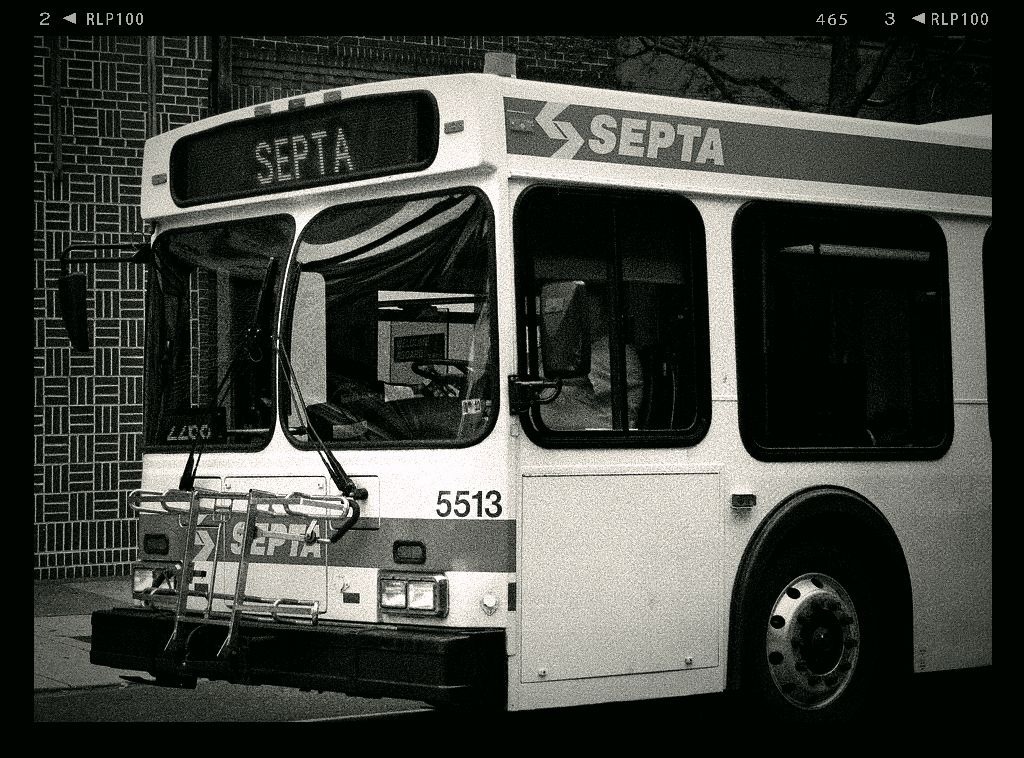 Previously: The Elf On The Shelf.

Type: Debated. On surface, subject appears to be of PV classification; however, upon closer examination, subject may actually be of EV or VV classification. It is also possible that subject could be a tulpa of some variety and not classifiable by currently identified categories.

Appearance: Subject appears to be a city bus belonging to Philadelphia’s Southeastern Pennsylvania Transit Authority (SEPTA) system. Its LCD marquee displays neither a number, nor a terminationpoint; the marquee identifies it simply with the word “SEPTA” — nothing more. Beyond this oddity, subject is seemingly unremarkable at a glance.

It is unknown how full subject typically is; targets who ride it and later debark tend not to be able to recall anything about any other passengers aboard with them — or even if there were other passengers.

Subject does not have a schedule. Subject does not have a route. Subject does have a driver, but even they may not know the rhyme or reason to subject’s operation. Subject is also not listed on any of the timetables available throughout the city, on the SEPTA website, etc. And even if it were, it is unknown how it would be referenced; in addition to lacking a route, schedule, number, and termination point, subject does not have any sort of official name, either. Targets have been known to call subject by any number of monikers, including but not limited to: The Bus; the Wandering Bus; the Random Bus; the Bus to Nowhere; and Zero.

Alternatively, subject appears to be a piece of fakelore created by writer and comedian Nicholas Mirra. Now based in Seattle, Wash., he previously lived in Philadelphia. In 2011, Mirra wrote and published a short story on his blog titled “Philly Urban Legends: The Wandering Bus.” This story is known to be subject’s first appearance, both online and in the world at large. Although Mirra later stated that the piece was fictional, many believed — and still believe —it to be true; subject subsequently developed what might be referred to as “a life of its own,” becoming widely shared, particularly across the internet, and blurring the lines between fact and fiction.

We may be able to take the phrase “developed a life of its own” literally — that is, it is possible that subject’s physical manifestation is a direct result of subject’s spread as a written and verbally told piece of work.

Modus operandi: Subject will appear to targets whom it has identified as requiring its services. It is unknown precisely how subject identifies targets. It seems simply to… know when it is needed. Targets may be of any age, gender, race, socioeconomic status, etc.; they do, however, all have the same things in common: They are always — always— at their lowest point. They do not know wherethey need to go; they simply know that they need to go.

Subject may appear on any road in any area of the city of Philadelphia. Locations in which sightings have been reported include West Powelton and CenterCity, while roads on which subject has been known to travel include Passyunk and Dauphin. The presence of a bus stop is not required for subject to appear.

When targets first sight subject, subject will be precisely one block away; targets must run to catch it — but they will always be able to. Subject moves slowly. It just wants to know that targets really need it before it stops.

And it will stop. When targets reach subject, it will brake, its doors will open, and it will allow targets to board. A fare is not required, although it is recommended to pay your way if you are able. There is no specific amount targets must pay; offer the driver whatever you can.

Ride as long as you need to.

When it is time for you to debark, simply pull the cord to request a stop and get off when subject pulls over.

You’ll know when to do so. You’ll be right where you need to be —  although it won’t necessarily be where you want to be.

After targets debark, subject’s doors will close and the bus will pull away. It is unknown whether targets may see subject again during their lifetime.

Alternatively, subject may simply spread in the same way that EVs and VVs typically do: It will worm its way into the consciousness of susceptible targets, nestle in, occupy valuable brainspace, and spread to others when target opts to share subject’s story. Subject’s end goal has historically been considered unknown; however, if the theory that subject is a tulpa — that is, if subject can manifest as reality if thought about conceptually by enough people — is correct, then said goal is likely merely to spread enough so as to… exist.

Additional notes: SEPTA was formed by Pennsylvania legislature on Aug. 17, 1963 and fully enacted on Feb. 18, 1964 in order to enable government subsidization of Philadelphia’s transitsystems. A predecessor, the independently owned and operated Philadelphia Rapid Transit Company (PRT), had been formed in 1903 and reorganized as the Philadelphia Transportation Company (PTC) in 1940. National City Lines later took over management of the PTC in the 1950s. A pact, the Southeastern Pennsylvania Transportation Compact (SEPACT), was formed by representatives of the five metropolitan counties — Bucks, Chester, Delaware, Montgomery, and Philadelphia itself — in and around the city of Philadelphia in 1961; SEPTA came out of this pact several years later.

Targets will not see subject unless they need it. However, it is unknown if subject is invisible to non-targets, or if non-targets simply… fail to notice it.

It has been suggested that subject may also have time traveling abilities: Some sources state that, if targets ride subject for long enough, they will debark sometime prior to when their issues — whatever prompted subject to appear to them in the first place — first commenced. However, it has never been satisfactorily confirmed that subject does, in fact, have these abilities.

It is unknown whether targets may ride subject more than once in their lives.

It is unknown whether targets may ride subject in other cities. According to some reports, Philadelphia is not the only city in which subject may be found; subject may exist — or versions of subject may exist — in every city or town with a public transportation system anywhere in the world.

Recommendation: Ride if you must.

But don’t overstay your welcome. Make sure you get off at some point.

If you’re still on board when the bus decides to leave town, it might take you with it — and it might not ever take you back.

The Pennsylvania Urban Legend That Will Make Your Skin Crawl.

SEPA 50: A Pre-History Of Our Much Beloved/Maligned Transit Agency.