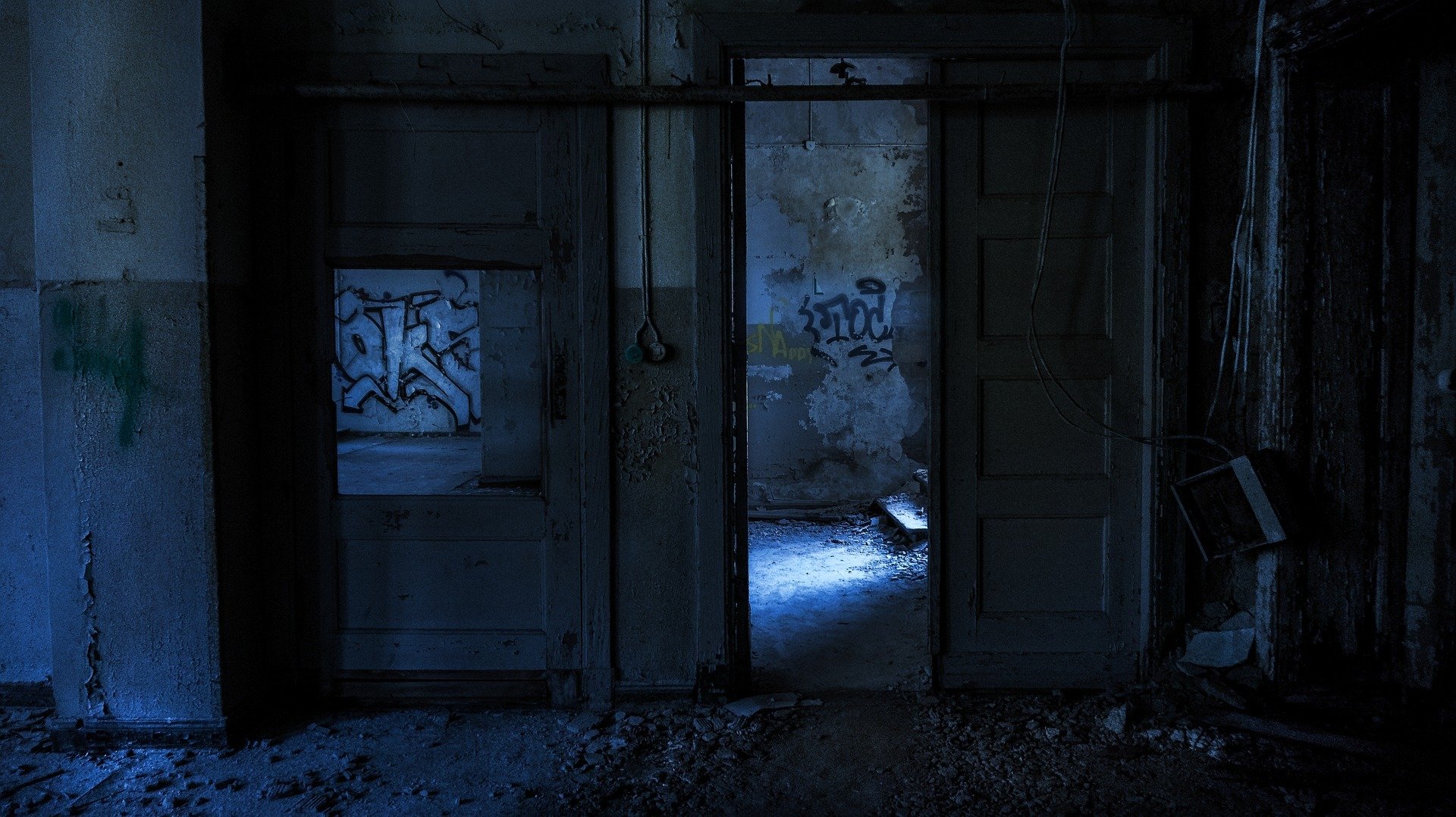 Previously: Ritual To Experience The Other Side.

Usually, the games I feature in the October entries for TGIMM’s long-running Most Dangerous Games section are rituals that are meant to be performed on or around Halloween. That’s not the case with the ritual game called Mother Midnight — you can play it any time of the year — but it seemed like a fitting choice to publish it as the first game of TGIMM’s 2020 Halloween season.

Because, as far as I know, it hasn’t been documented anywhere on the internet before — not until now.

We have one of TGIMM’s extremely generous Patreon supporters to thank for this one: After this patron subscribed to the campaign, I received a message from then asking if I’d heard of Mother Midnight before, or if I knew anything about it. They’d grown up playing it in Central Texas with their friends, they wrote; however, now that some years have gone by, they realized that, oddly, they hadn’t been able to find any information on it anywhere — not online; not in books; nothing, anywhere.

When I started looking into it, I came up similarly empty — and with both of our attempts to find something, anything about an urban legend game called Mother Midnight resulting in absolutely nothing? I’ll be honest: That struck me as pretty astonishing. It made me wonder, initially, whether Mother Midnight might be a hyper-specific regional variation of a more well-known game, similar to the way that Black Helen sounded to me like a possible variation on Bloody Mary; after the patron shared with me the details about how the game is actually played, though, I’m less convinced that’s the case. It might, however, be a hyper-specific regional legend all its own — that is, not another take on a similar legend, but a legend unique to the area in which the patron played it.

All of which is to say: This game is a fascinating mystery to me — and, with the patron’s permission, I’m pleased to present to you the ritual game Mother Midnight as a Halloween treat. (Or maybe a Halloween trick. Both seem applicable, somehow.)

Do you have experience with this game? Or with a similar one? Or have you seen something somewhere about it, online or otherwise, that I may missed? Do leave a note in the comments, or get in touch via our Contact form — I would love the find out more about this one. Also, if you’re curious to know a little more about where the patron who told me about this one learned the game, where they played it and when, and some interesting and possibly relevant threads I dug up while I was looking into this one, scroll down to the bottom of this post, after the game itself. (Or just click here.)

Spectators are permissible, but not required. It is recommended that you have no more than three or four Spectators present, in addition to the Principal and Assistant.

It is not necessary to clear the playing space of other people or pets before beginning; however, it is recommended that you have some means of ensuring that you will not be disturbed, and that no one will turn on any lights in the space for the duration of the game.

For best results, use the front door of a single-family house or other building as your doorway/threshold. In this case, the players should be positioned inside, while the childhood object, when placed after the Principal completes their 12 steps, should be positioned outside. It does not have to be completely dark immediately outside the door, but if lit, it should be dimly so. For example, ambient light from a streetlamp some ways away is permissible; however, light from a lamp or bulb immediately above, next to, or near the door is not.

Note, though, that a door that is not the front door of a single-family house or building may be used, as well — for example, a door within a building that separates not the inside from the outside, but a room from a hallway, two rooms from each other, etc. There must, however, still be enough space on one side of the doorway for the Principal to take 12 steps in a straight line away from it. Should you use an interior door, ensure that all lights in the playing space on the side of the door on which you plan to place the childhood object have been turned off before you begin.

Do NOT position the players in an outdoor environment.

Do NOT cross the threshold after the childhood object has been positioned and the Principal has returned to the door during the first steps of The Questioning.

You may find it useful to use not just a time-keeping device, but a time-keeping device equipped with an alarm. If you choose to use such a device, set the alarm for midnight when you begin your preparations. Turn it off as soon as it sounds, then continue with The Questioning, Step 6 as written. (“Assistant: At midnight precisely, reach carefully around the Principal and open the door for them. Keep hold of your flashlight; you’ll need it shortly.”)

You may, at some point during The Questioning, hear the soft sound of a woman crying. This is nothing to be concerned about; it simply indicates that She is nearby.

During The Questioning, do not say anything to Her other than the four questions.

Do not ask the questions in a different order.

Do not omit any of the questions.

Do not ask any additional questions.

Ask her only these four questions, in this precise order, waiting patiently for her response between each one.

If you hear Her crying after completing The Farewell — well… just… be careful.

If, at any point during the game, She:

To do so, have the Assistant close the door behind the Principal, have all players turn on all the lights within the playing space, and remain where you are until the sun has risen. Do not look out any windows, and do not open the door. When daylight has arrived, retrieve the childhood object, destroy it, and dispose of its remains as far away from both your playing space and your home as possible.

Do NOT bring the object back inside the playing space.

Do NOT bring it to your home.

You wouldn’t want Her to come looking for it, would you?

According to the TGIMM patron from whom the Mother Midnight game was collected, they played it circa 2003/2004 in Austin, Texas — although Austin isn’t necessarily the game’s point of origin. The patron wrote that they had learned it from an older student at their school who was originally from Texarkana. In the grand tradition of many urban legends, this older student had apparently also learned it from someone older than him, as well — his older siblings.

The Texarkana connection is interesting to me. Texarkana is, of course, the Town That Dreaded Sundown — that is, the location where the Texarkana Moonlight Murders occurred in 1946. It’s thought that the Moonlight Murders may have given rise to, or at least contributed to the proliferation of, the well-known urban legend “The Hook”; I’d be curious to know whether other legends may have grown out of the case, as well — and if so, whether Mother Midnight might be one such legend.

Of course, we don’t know for certain whether Mother Midnight originated in Texarkana, either; but, like I said: It’s interesting.

When it comes to the Mother Midnight figure herself, again, what I found was intriguing, although tenuous. “Mother Midnight,” it turns out, is a slang term in thieves’ cant — the slang of the criminal underworld in Great Britain between the 16th and 17th centuries (although it also continued to appear in literature through the 18th century) — that was used to refer to a midwife, a brothel owner, or both. The Daniel Defoe novel Moll Flanders, which was first published in 1722, has a character in it who plays that role; she’s most commonly identified in the text as simply “the Governess,” but is also sometimes referred to as “Mother Midnight.” There’s been a lot of academic writing published on the Governess, but one in particular that I found during the research process stood out to me: This piece starts by drawing a connection between midwives and the Greek Fates. (That was new to me; I’m familiar with some of the mythology surrounding the Fates, but I was unaware that they’re sometimes depicted as midwives.)

I bring all of this up because, somehow, it seems thematically relevant to the Mother Midnight in this particular ritual game: Midwives bring us into the world; the Fates take us out of it; and the gameplay for the Mother Midnight game involves asking the Mother Midnight figure about the dates of your own birth and death. Again, the link here is tenuous, but I can’t help feel like maybe there’s… something there.

One thing’s for sure:

You don’t play Mother Midnight unless you’re okay with knowing exactly how much time you have left on this planet.