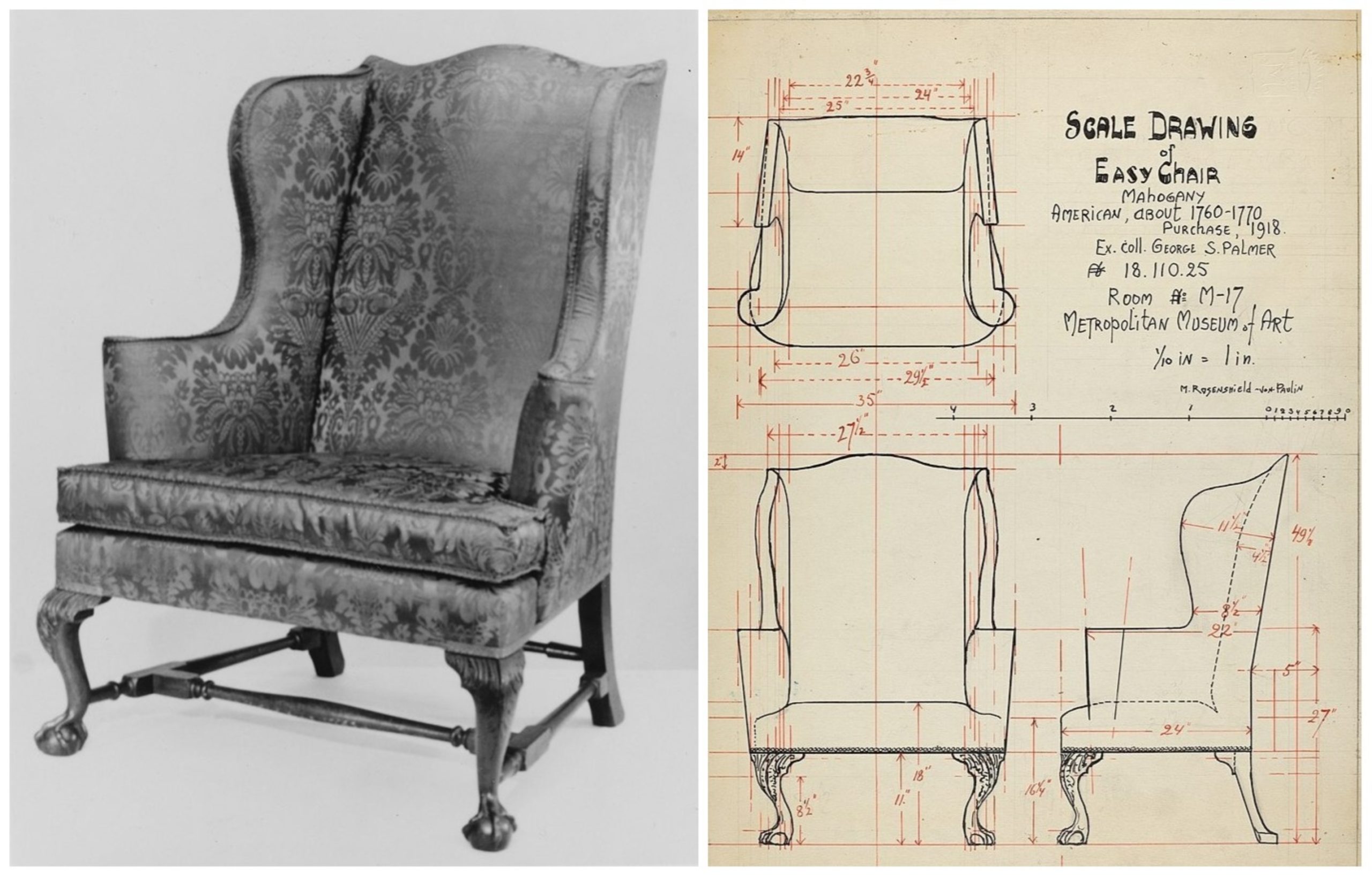 Period/location of origin: Unknown. Subject is frequently stated to be roughly two centuries old in sources with dates ranging from the 1990s to the early 2000s, placing its period of origin in the late 18th or early 19th century; however, this date has not been confirmed. Subject’s location of origin is also unknown, although chairs of the style subject happens to be originated in Europe. (See: Appearance.)

Appearance: Subject appears to be a blue, upholstered, wing chair formerly located within the “Blue Room” of the Baleroy Mansion, a stately home on Mermaid Lane in the affluent Chestnut Hill area of Philadelphia, Pennsylvania. It is elegant and sumptuous, a beautiful antique that most would be proud to have in their homes — were it not for subject’s more… unfortunate qualities.

There is a reason subject is known as the “Chair of Death.”

(Note: Photograph and diagram seen above do not depict subject, but rather a chair in the same style as subject. Photographs of subject are not known to exist.)

Modus operandi: Subject’s modus operandi is simple: Should a target make the ill-advised decision to sit in it, subject will ensure target’s death within two weeks’ time. The precise nature of the death will be difficult to determine; in many cases, targets appear simply to slump over, then expire, with little to no warning.

Subject has claimed at least three victims, according to records held by the Chestnut Hill Conservancy (formerly the Chestnut Hill Historical Society): A housekeeper, a cousin of Baleroy Mansion owner George Gordon Meade Easby, and Paul Kimmens or Kimmons (sources vary), a friend of Easby’s and/or curator of the mansion.

According to some reports, subject actively entices targets to sit upon it; however, the possibility also exists that subject simply waits for targets to self-select by making the decision to sit upon it themselves. In cases where subject is believed to entice targets, a blue or red mist is sometimes described as appearing at the time of the encounter.

It is unclear why subject is so opposed to living humans sitting within it. Some sources state that an entity attached to subject — a feminine-presenting figure identified alternately as “Amanda” and “Amelia” — claims ownership of it and simply does not like others sitting in her seat; however, this entity’s existence/true identity has never been proven. (Unfortunately, it is also unlikely that it ever will be either proven or disproven, due to the dearth of information about subject’s own history.)

It is possible that the chair is cursed, rather than haunted (hence its classification in this report). Or it is possible that it is cursed and haunted. Further research may be required to make this determination once and for all.

Containment: Subject is generally passive; therefore, subject may likely be contained simply by placing it in a position and/or space where it is impossible for any living human to sit in it, accidentally or otherwise.

This containment method has not been tested, however — or if it has, the results have not been documented. As such, it remains, at present, a theory only.

Some sources — typically those which carry the 1911 date — state that Baleroy Mansion was built on blood: According to these sources, a carpenter responsible in part for the property’s construction murdered his wife in the main house. This claim does not appear to be supported by the historical record, but has proven to be persistent all the same.

The mansion was purchased in 1926 by the Easby family. The Easbys trace their roots back to Easby Abbey, a Premonstratensian abbey in North Yorkshire, England originally founded in the 12th century; they claim to have arrived in what is now the United States circa 1682/3 on the Welcome, a ship in William Penn’s fleet. (No person named Easby is listed on reconstructions of the passenger list for the Welcome, but it is possible that some records have been lost.) They reportedly chose the name “Baleroy” for the mansion based on the Chateau de Balleroy in the Loir Valley region of France.

Baleroy Mansion is three stories high, with approximately 7,025 square feet of living space. Its construction is stone, and it contains approximately 30 rooms. An extensive restoration of the home was undertaken in 1970.

Among the 30+ rooms contained within the mansion is the “Blue Room,” an 18th century-style drawing room on the second floor which reportedly houses, among other things, several secret compartments, a set of sterling silver dinnerware used during a celebratory meal following the signing of the Declaration of Independence, and, of course, subject.

Subject’s own history remains largely unknown. It is unknown, for example, when precisely subject was constructed or when; it is also unknown when subject first arrived at Baleroy Mansion. Any history associated with subject which may explain “Amanda” or “Amelia” is similarly shrouded in mystery. Rumors that subject was once owned by Napoleon Bonaparte are unsubstantiated.

Incidents surrounding subject are not the only supernatural occurrences that have taken place within Baleroy Mansion. In fact, the mansion is considered by many to be one of the most haunted structures in the United States. Other entities said to reside within the house include May Stevenson Easby, Jr., known as Steven, who died of an unspecified illness in 1931 at the age of 11; Easby family matriarch Henrietta Meade Large Easby, who was born in 1880 and was one of the house’s occupants from the Easby family’s purchase of the property until her death in 1962; an elderly, feminine-presenting person who walks along one of the house’s hallways, holding a cane; Thomas Jefferson, who was known to appear occasionally next to a grandfather clock in the dining room; and others.

The last remaining Easby to occupy the house, the aforementioned George Gordon Meade Easby (see: Modus operandi), died in 2005 at the age of 87.

Baleroy Mansion was last sold in 2012 and is now a private residence. (The mansion’s precise address has been omitted from this report for this reason.) Although its current owner is “skeptical of spirits in the mansion” and has not seen any of its alleged entities himself, he does acknowledge that “old house noises” — including strange knocking sounds — may still be heard in the mansion from time to time. He does not, however, feel the presence of anything “evil.”

The collection of antiques that formerly resided within the mansion have been removed and, in many cases, sold.

Recommendation: Should you ever come upon a blue, upholstered wing chair that looks as if might date back to the late 18th or early 19th century… don’t sit in.

It’s best not to take that chance.

Haunted Pennsylvania: Ghosts and Strange Phenomena of the Keystone State by Mark Nesbitt and Patty A. Wilson.

What Are You Afraid Of: The Blue Room & Chair Of Death At The Baleroy Mansion.

Baleroy Mansion: The Most Haunted House In Philadelphia.

The Haunting Of Baleroy Mansion And The “Death Chair.”

A Haunting Tale Of Blue Blood And Red Tape.