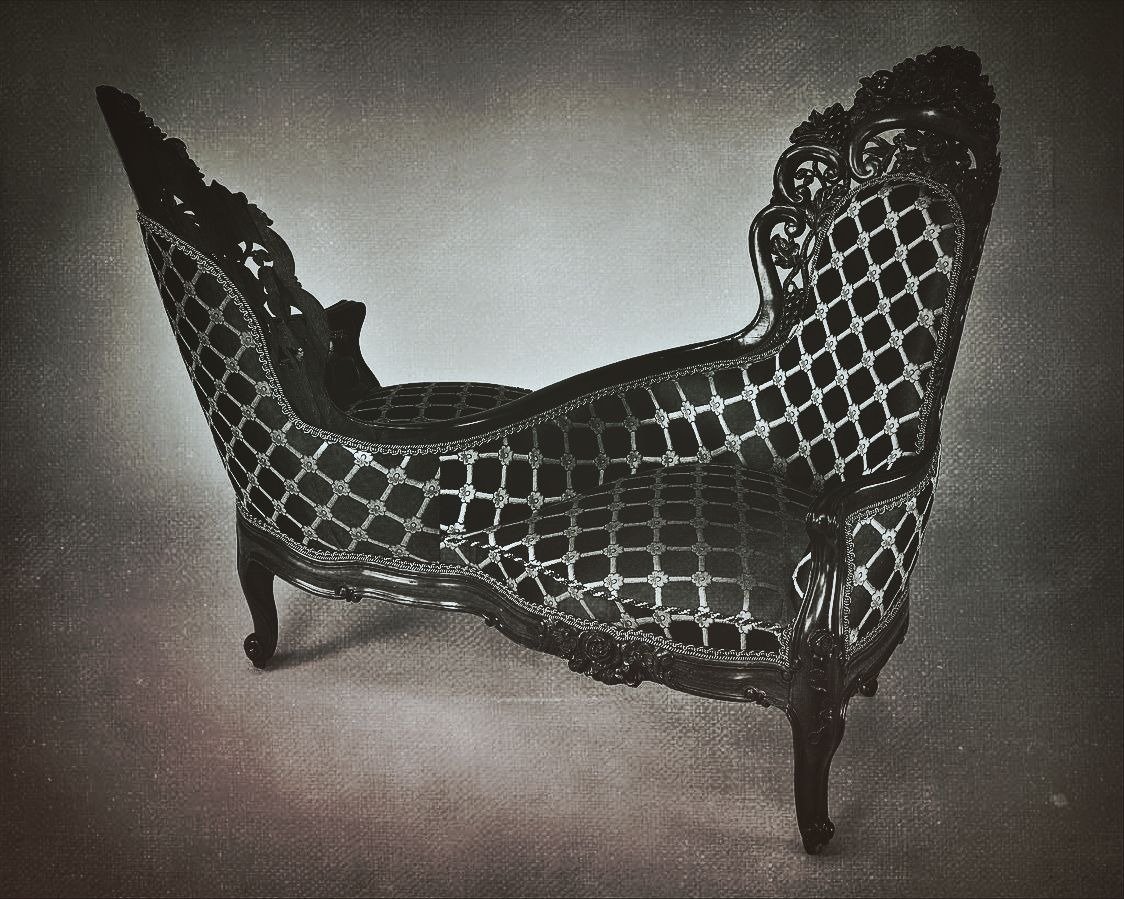 A recent upload to the Creepypasta Wikia — it arrived on Jan. 8, 2020, courtesy of user Eightpointfivetails — the Kissing Chair Game is likely a fictional invention. However, the choice to use the titular kissing chair for this Game of Knowledge is an interesting one; it gives it a sense of history that it might otherwise lack, thereby adding to its believability.

Kissing chairs evolved out of the more commonly-encountered loveseat, which itself dates back to the late 17th century. Both are small couches or sofas that can seat a maximum of two people — but interestingly, canoodling wasn’t the original reason for their size. Rather, they were meant to accommodate the voluminous skirts that were ubiquitous in women’s fashion at the time. Indeed, it wasn’t until the 18th century that amorous young lovers realized that the sofas might be used for courting purposes.

Kissing chairs arose in the 19th century directly out of this new usage for what gradually become known as the loveseat: They enabled courting couples to face each other and have intimate conversations while still maintaining a modest barrier between them. Their French name reflected this function quite clearly; they were called tête-à-têtes — “tête-à-têtes” translating in English to “face-to-face” or, more literally, “head-to-head.” The “kissing chair” moniker, meanwhile, gained steam in English-speaking cultures due, again, to the piece of furniture’s relative modesty: Courting couples could kiss chastely while seated in them — ideally nothing more than pecks on the cheek — but were prevented from any other form of touch by both the positioning of the two seats and the armrest between them.

Kissing chairs, you see, don’t allow both people seated on them to sit side by side, facing the same direction (and possibly with their bodies close enough to touch on the seat itself). The unique S-shape of the piece seats them next to each other, but facing opposite directions — as if you’d placed two chairs next to each other, but turned one of them around. This means that you’re able to see the person sharing the seat with you if you turn your head to the side, or if you look behind you.

Your safety during the Kissing Chair Game is actually dependent on this characteristic: You’re only safe if you remain facing forward the entire time.

You are never, EVER to turn your head to look at your conversational companion.

In terms of gameplay, many of the rules to this particular game resemble those belonging to the Hosting Game, the Answer Man, and even the Closet Game and the Midnight Game, to an extent. As such, the variety of ritual involved here will likely look familiar to many who have at least some awareness or understanding of how these kinds of stories work. And, as such, the same warnings as always apply.

When do they not?

You know it goes:

You may prepare more than one cup of salt water, should you feel you might need it — just in case.

Do NOT allow the white candle to go out at any point during the Question-And-Answer Period. Should the candle extinguish, you must relight it within five seconds. However, you MAY NOT leave your seat in order to relight it. Position it wisely; do not place it too far away from your seat.

Ask your questions wisely. Do not squander your guest’s knowledge.

Although it is not wise to refuse to answer too many of the questions your guest may pose to you, there are circumstances in which it is wiser to hold your tongue than to respond. These circumstances include, but are not limited to:

Do NOT allow the Question-And-Answer Period to go on for MORE than three hours. After three hours have passed, you may have… difficulties getting your guest to leave.

Additionally, it is not recommended that you play this game more than once in the same location. The more times you play in the same, you may, again, have difficulties getting your guest to leave — and they may begin to show up unannounced, as well.

The Cost Of Losing:

Do NOT, under ANY CIRCUMSTANCES:

At ANY POINT while playing this game.

To perform any of these actions is to lose the game.

And to lose the game is to swap places with your guest.

And to swap places with your guest is…

…Well, let’s just say that you might have to wait a very long time before you’re able to find anyone suitable to swap with yourself.

[Photo via Wikimedia Commons, available under the public domain; remixed by Lucia Peters.]