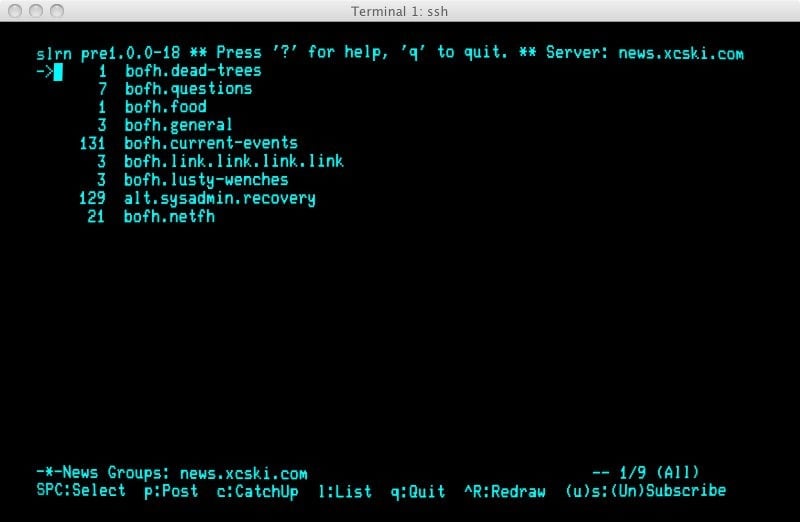 20 years ago — almost 20 years ago exactly, in fact; the original date pegged to this phenomenon is Aug. 5, 1996 — a curious message began appearing in discussion groups on Usenet. Or perhaps more accurately, curious messages, plural; there were a huge number of them, and they were all similarly indecipherable. Consisting of long strings of seemingly random words — gibberish, really — the messages all had one thing that drew them together: Three words. Somewhere in the body of each post were the words “Markovian Parallax Denigrate” — not necessarily in that order or even grouped together, but definitely, undeniably present.

The Markovian Parallax Denigrate is commonly regarded as a number of online firsts, among them the first internet mystery and an early instance of spam (although it’s worth noting that the first major spam incident hit Usenet two years earlier in 1994). And two decades later, the mystery remains largely unsolved.

To understand the Markovian Parallax Denigrate — insofar as it’s possible to understand the Markovian Parallax Denigrate, that is — first, you need to understand Usenet and ARPANET. Admittedly my understanding of ARPANET is clumsy at best, so I’ll point you here for a better overview of it; what I do know, though, is that ARPANET was pretty much the beginning of the internet: A network that originally connected just four Interface Message Processors, or IMPs. These IMPs were located at the University of California, Los Angeles (UCLA), the Augmentation Research Center at Stanford Research Institute, the University of California, Santa Barbara (UCSB), and the University of Utah. The first successful message was sent from UCLA to Stanford on Oct. 29, 1969: The first two letters of the word “login.” (The system crashed before the entire word finished sending.)

Meanwhile, Usenet was first conceived of in 1979 as a way for people to trade information and discuss news via “newsgroups”; it functioned similarly to the way web forums and bulletin board systems do, although the technicalities of how the newsgroups exchanged posts wasn’t quite the same. (Again, my understanding here is clumsy; although I’m old enough not to be considered digitally native — unlike the younger end of the Millennial generation, I grew up during a time when it was uncommon to have home internet access — I’m young enough to have missed the heyday of Usenet. I was around when it was, but I wasn’t old enough to use it at the time.) Usenet was connected to ARPANET in 1980, and as both systems grew and expanded, more and more people from all over the world were able to talk to each other about subjects that interested them through the exchange of articles and information. Discussions in each newsgroup were threaded, and discourse was lively.

So when the Markovian Parallax Denigrate messages began appearing in 1996… well, given how much today’s internet population loves a good mystery, you can probably imagine how Usenet’s felt about it. Here’s an example of what those messages looked like:

We have this example thanks to Google’s Usenet archive, although it’s pretty much the only example that still remains.

But what the hell does it mean?

There are theories, of course. Some believe it’s an open cipher; others believe it’s a code or something resulting from steganography; still others think it might be the online version of a numbers station or possibly a tool used by CIA agents to transmit messages. The keywords that lend the messages their name suggest that it might be the result of some sort of Markov chain — that is, part of a “mathematical [system] that [hops] from one ‘state’ (a situation or set of values) to another,” as Victor Powell and Lewis Lehe explain it on Explained Visually. Markov processes can be used both to create models of behavior and to predict the probability that your model will jump from one state to another. Powell and Lehe detail it with the following example:

“If you made a Markov chain model of a baby’s behavior, you might include ‘playing,’ ‘eating,’ ‘sleeping,’ and ‘crying’ as states, which together with other behaviors could form a ‘state space’: A list of all possible states. In addition, a Markov chain tells you … the chance that a baby currently playing will fall asleep in the next five minutes without crying first.”

Markov chains are often used in text generators; bots like Mark V. Shaney, for example, use Markov processes, as do spammers in an effort to generate paragraphs that look real enough to get past spam filters in email clients and online comment sections. Humans can usually spot text created using Markov processes; it’s why we’re so rarely fooled by unsolicited emails with subject lines like, “contact this attorney,he is geninue to serve you better” (which, by the way, is the actual subject line of an email sitting in my spam folder right now).

Many, many attempts were made to uncover what the Markovian Parallax Denigrate messages were, but none of them were successful. If it’s a code, no one has managed to crack it; and if it’s a Markov process, then I would argue it’s not a very sophisticated one. If the goal of a text generator based on Markov processes is to create something that looks real enough to pass, then it fails spectacularly: If there is one thing the phrase “jitterbugging McKinley Abe break Newtonian inferring caw update” is not, it’s a grammatically correct sentence.

So the meaning of the text itself remains obscured. But what about its origins? Who orchestrated the Markovian Parallax Denigrate? Kevin Morris took a deep dive into this angle for Daily Dot in 2012 by going after one of the most puzzling threads in the mystery: The name Susan Lindauer. This is the name attached to that one remaining example of the MPD text, and it’s likely familiar to many: Former journalist Susan Lindauer was arrested in 2004 and indicted for “acting as an unregistered agent of a foreign government” — in this case, the Iraqi government under Saddam Hussein. She was declared unfit to stand trial in 2006, when a psychiatric evaluation found her to suffer from paranoia and delusions of grandeur. She’s, as Morris describes her, “a purveyor of sundry conspiracy theories” these days. During the ‘90s, at the height of the Markovian Parallax Denigrate’s fame, she claimed that she knew someone who knew who committed the 1988 bombing over Lockerbie, Scotland. (The culprit was actually the Libyan government, which admitted responsibility in 2003.)

If Lindauer’s name was attached to the MPD message, did she write it? Not according to her; she told Morris via email, “I’ve heard of this cyber phenomenon, but I am not the Susan Lindauer who authored the code. Wish I could enlighten you. I’m baffled, too!” So… how did her name get connected to it? Was it, as one theory suggests, done by her enemies, an effort to discredit her in response to her claims about the Lockerbie bombing? Well… here’s the thing: This Susan Lindauer isn’t the only Susan Lindauer in the world. And what happened when Kevin Morris went digging blows the theory that the connection of any Susan Lindauer implies who’s behind the Markovian Parallax Denigrate.

Morris started with the email address pegged to the archived MPD message: susan_linaduer AT worf DOT uwsp DOT edu. It hails from the University of Wisconsin at Stevens Point (UWSP) — and it belonged to the second Susan Lindauer, who graduated from UWSP with a graduate degree in physical education in 1994, notably the same time during which Lindauer #1 was living in Washington, DC.

Lindauer #2 is on Facebook. She goes by Susie and changed her name to Mursau when she got married. She lives in Wisconsin. And when Morris contacted her by telephone to ask her about both the Markovian Parallax Denigrate and Lindauer #1, she said she’d never heard of either of them. Writes Morris:

“So unless Mursau is purposefully hiding her past as a Usenet spammer (which seems unlikely, to put it mildly), she didn’t send the email that launched one of the weirdest mysteries in internet history. More likely: Someone scraped her address along with the dozens of other academic emails used in the Markovian Parallax Denigrate messages, then used them to mask the actual address. It’s easy.”

So are we looking at a prank that has somehow managed to outlast 20 years’ worth of internet history? Probably, although the conspiracy theories still remain. What’s sort of interesting is this: The Wikipedia page for the Markovian Parallax Denigrate was deleted in 2009. (It’s still viewable via the Wayback Machine, for the curious.) The reason for its deletion was cited as a lack of credible sources, which is both perfectly understandable and perfectly acceptable; however, as Kevin Morris notes, the deletion occurred right after the connection to Lindauer #1 was made.

Not everyone thinks that’s a coincidence.

Mark V. Shaney At Your Service.