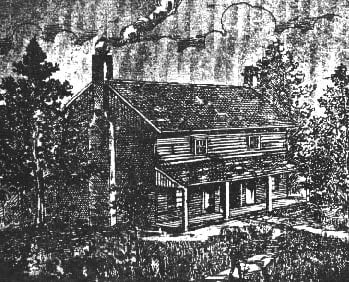 Modus operandi: Subject will first make its presence known to target through the creation of noise. Target will hear what they will believe to be someone knocking on the door of their home; however, upon answering the door, target will discover no one present. Around this time, target may also see unusual and unidentifiable animals on the land surrounding their property. Noise will then escalate to knockings on both the door and outer walls of the dwelling, followed by sounds heard within the house heard within the house: Items being dropped, chains being dragged along the floor, and sounds of whispering, gulping, or choking.

Once the noises have moved indoors, target may find items in the home to be moved suddenly and without warning, particularly during the night. Blankets and pillows may be yanked away from target while attempting to sleep, and the whispering, gulping, and choking noises may resolve into a disembodied voice. The voice may alternately sing, quote scripture, and carry out conversations with target.

Although all inhabitants of the home in question may suffer subject’s wrath, subject may also choose to focus on single individuals. Subject will regularly slap, pull the hair of, and throw objects at chosen individual; should the individual enter a romantic relationship with a person outside of target’s home, subject’s abuse of individual will intensify.

Subject has been known to take credit for the deaths of targets, although whether subject is actually capable of killing targets remains unsubstantiated.

Containment: Unknown. Any attempts to exorcize subject have been aborted before completion. Further research required.

Additional Notes: Subject first appeared in 1817 at the home of the Bell family in Adams, Tennessee. John Bell, the patriarch of the family, discovered one evening an animal in his field with the body of a dog and the head of a rabbit; shortly thereafter, subject commenced knocking on the door and outer walls of the Bell’s home.

Subject continued to torment the Bells for a number of years, focusing much of its ire on the youngest Bell daughter, Elizabeth (called Betsey). Subject’s abuse of Betsey intensified when she became engaged to one Joshua Gardner, a young man who also lived in the area. For reasons unknown, subject

In 1819, Major Andrew Jackson, ten years prior to becoming the 7th President of the United States, is believed to have visited the Bells with the purpose of investigating the disturbances in and around their home; however, when one of his men was attacked and beaten by an unseen force, Jackson is said to have fled the farm, stating, “I’d rather fight the entire British Army than to deal with the Bell Witch.” Whether or not this event actually took place, however, has not been proven.

John Bell’s health deteriorated over the course of subject’s occupation; he passed away in 1820, with subject claiming to have poisoned him.

Betsey Bell broke off her engagement with Joshua Gardner in 1821, at which time subject declared it would depart temporarily and return in seven years. True to its word, subject returned for a few weeks in 1828, only to depart again with the promise to visit in 107 years later. It is unknown whether subject returned in 1835.

Contrary to its widely known nickname, subject may not necessarily be a “witch.” Subject’s behavior more closely resembles that of a poltergeist. Although subject once claimed to be a woman called Kate Batts, the truth of this claim has yet to be verified.

Recommendation: The cabin formerly owned by the Bell family may be visited, although it is not recommended to do so. Nor should attempts be made to visit a cave on the property reportedly used by subject during its campaign of terror over the Bells. Subject may not have made its presence known for many years; however, it may still be active and searching for a new home—and new targets.

The Bell Witch of Tennessee.