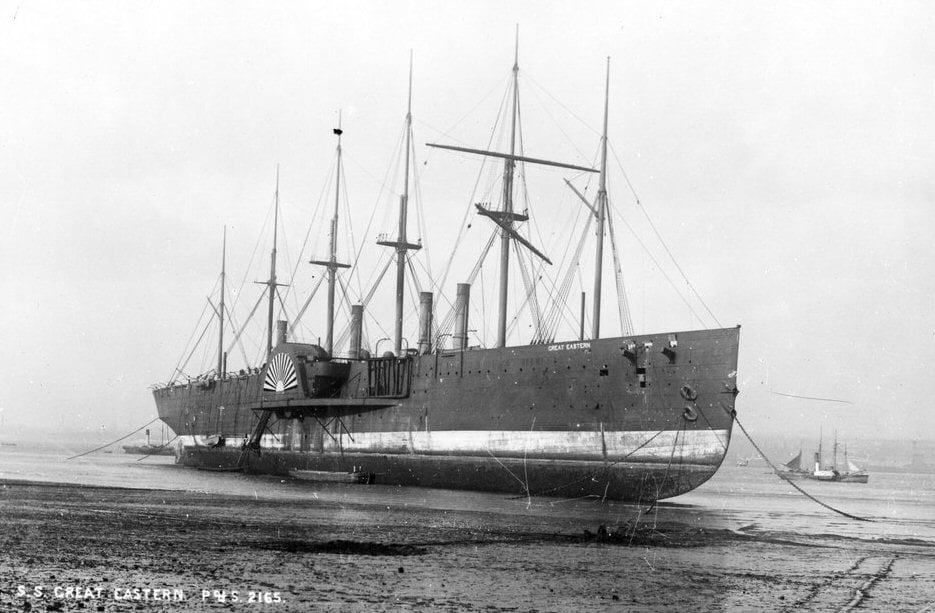 Appearance: Subject is steamship initially built with the purpose of transporting large groups of passengers from England to Australia without the need to stop for refueling mid-voyage. Measuring 692 feet long, weighing 18,915 tons, and with a maximum capacity of 4,000 passengers, subject was, at the time of launch, the largest ship ever built. Method of propulsion was by a single “screw,” or propeller in conjunction with several paddle wheels and auxiliary sails. One steam engine powered the screw, while four were dedicated to the paddles; subject’s total power capability is estimated at 6MW or 8,000 hp. Subject also boasted a double hull, the first ship to do so. Double hulls have now become standard for safety reasons.

Modus operandi: Subject may not be as infamous as the CV known as the Flying Dutchman;  however, as demonstrated by its history, subject is, in the vernacular, a “bad luck charm.” Although subject has never been shown to act maliciously, its mere existence appears to have brought a great deal of misery down upon any and all connected with it. Numerous deaths have occurred on or because of subject; additionally, several “ghost stories” continue to cling to subject, despite a lack of evidence concerning their veracity.

Subject’s history is as follows:

Subject first came into existence as a thought experiment on March 25, 1852. Engineer Isambard Kingdom Brunel sketched a steamship in his diary, writing beneath it, “Say 600 ft x 65 ft x 30 feet”—measurements six times larger by volume than any ship afloat at the time. Brunel then showed the design to naval architect and ship builder John Scott Russell; the two subsequently teamed up on the project, with construction beginning in the spring of 1854.

Problems arose almost immediately, the first of which concerned precisely where subject was to be built. Due to subject’s extreme size, the cost of constructing a dock big enough to house the project was estimated at £8 – 10,000; as such, the idea of building a dock for subject was quickly abandoned. Subject eventually was constructed sideways to the river in David Napier’s shipyard, which Scott Russell and Brunel leased specifically for the purpose.

Subject’s ill-fated history continued when Scott Russell went bankrupt in 1856. A statement was issued to the Board of the Eastern Company, which held the contracts for the finished ship, handing subject in its incomplete form back into their hands. Three-quarters of the work on the hull had not been completed; a deficit of 1,200 tons between the amount of iron supplied and that used on the ship was also found. Although construction was eventually completed in 1857, it would not launch until January 31, 1858. Three attempted launches failed before the fourth succeeded.

Subject finally made its maiden voyage in September of 1859, only to meet with disaster several days into its journey. By September 9, subject had passed down the Thames, into the English Channel, and past Hastings when a huge explosion blew the forward deck apart with enough force to throw the No. 1 funnel into the air. Five stokers died attempting to get the escaping superheated steam under control; four to five others were badly injured, and one was lost overboard. Additionally, subject’s captain, William Hastings, would drown a mere four months later.

Isambard Brunel was at least spared the sight of the exploding ship. He died of a stroke mere days before subject’s September launch.

Although subject was designed for the Far Eastern run, insufficient traffic on that particular route caused it to be repurposed for transatlantic voyages. Subject could subsequently not compete in speed and performance with other vessels already in service on this route, leading to poor business and worse finances. After several years at sea, subject was sold for a paltry £25,000—£75,000 less than its estimated worth in materials alone. Subject was next put to work as a cable layer before becoming a showboat, a floating palace/concert hall, and a gymnasium. Subject finished its career as a floating advertisement for a department store in 1888.

Containment: Subject was dismantled via a wrecking ball at Rock Ferry on the River Mersey between the years of 1889 and 1890 and thus shouldn’t no longer be considered to pose any threat. It should be noted, however, that subject’s top mast currently stands as a flagpole at the Anfield football stadium, used by the Liverpool Football Club; additionally, geophysical survey evidence suggests that residual ironworks from the ship’s keel and lower structure may still reside in the foreshore.

Additional notes: Rumors that one or more human skeletons were found inside subject’s double hull upon its dismantlement remain unsubstantiated.  Although subject’s unfortunate history may have been a result of CCs running rampant aboard the ship, lack of evidence possibility to remain conjecture only. However, the rumors may still be worth investigating.

See also: “The Ballad of the Great Eastern.”

Recommendation: Subject’s remains may be viewed from a safe distance at the Anfield football stadium. It is not recommended that the top mast ever be reassigned to its original purpose.

The Ballad of the Great Eastern.