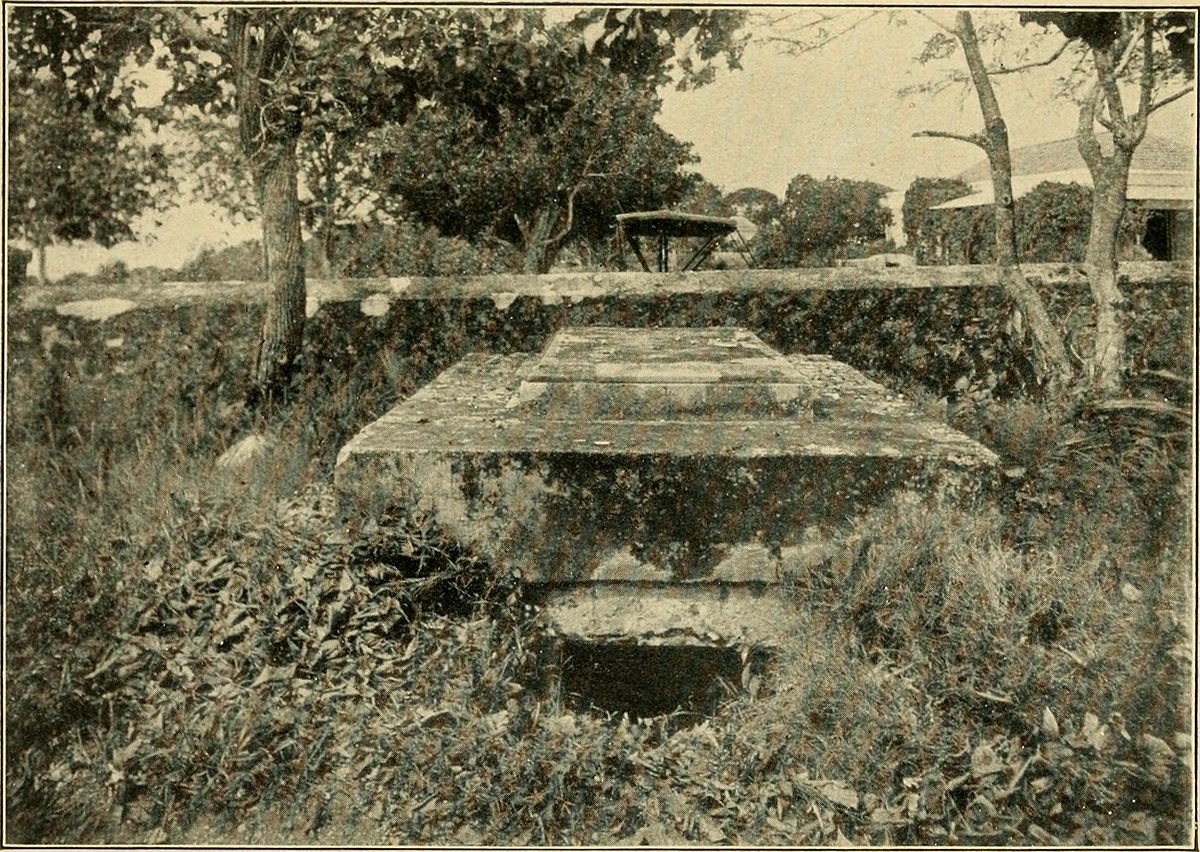 Appearance: Subject appears to be a collection of six coffins holding the remains of the Chase family once interred within a semi-sunken tomb in the Christ Church Parish Church cemetery in Oistins, Barbados.

Per a 1915 account of subject written by Sir Algernon Edward Apinall in West Indian tales Of Old, the vault is constructed from “massive blocks of stone quarried from the local coral… [and] cemented together so firmly that it [looks] as if it were hewn out of solid rock.” Aspinall also attributes the vault’s semi-sunken nature to a combination of hurricane security and “to some extend the nature of the foundations.” The entrance seals with “a ponderous slab of blue Devonshire marble,” which, when removed (an action which required six or seven people, according to an earlier account from Sir James Edward Alexander in 1833), reveals several steps leading down into the vault proper. Inside, the walls of the vault “[slope] inwards” towards an “arched roof”; the dimensions given for the base are 12 feet in length by six and a half feet in width, with the roof being somewhat narrower due to the sloped walls.

The vault no longer holds any coffins or other remains. However, during the time in which subject resided within the vault, the coffins comprising subject were made primarily of lead. One wooden coffin was also included among subject’s numbers.

Modus operandi: During the period in which subject was interred within the vault, subject was widely known for a curious phenomenon observed whenever the marble slab was removed from the entrance of the vault in order to inter further remains: The coffins would be found in disarray, moved from their orderly positions and scattered about the vault as if they had been tossed by someone of great strength.

No evidence of human tampering was ever discovered that might account for the rearrangement of the coffins. Nor was it possible for earthquakes or other natural disasters to have caused the movement.

As far as anyone knew, the coffins had moved all by themselves.

Containment: Unknown. Possibly not required, although the coffins comprising subject have been relocated and interred elsewhere. They have not moved on their own since.

Additional notes: Chase Vault is believed to have been constructed circa 1724 for a family by the name of Elliot — possibly for a particular member of the Elliot family, James. However, none of the Elliots were interred in the vault; indeed, it was left empty for more than 80 years, by which time it had passed to the Chase family. In 1807, the vault received its first coffin — although the remains inside were not of the Chase family. Rather, they belonged to a Mrs. Thomasina Goddard. Mrs. Goddard was interred within the vault in a wooden coffin, thus becoming the first coffin in the collection which would grow to become subject.

But when the marble slab was removed to make way for Thomas Chase’s coffin, a shocking scene awaited those who had opened the vault: The previous three coffins had been “violently disturbed,” as Algernon Edward Aspinall described it. James Edward Alexander had earlier written of the scene as presenting a “confused state,” with the coffins “having been apparently tossed from their places.”

Similar activity was discovered when the vault was unsealed twice in 1816 for the burials of Samuel Brewster Ames, who, like Mary Anna Chase, had died in infancy, and the adult Samuel Brewster (presumably the younger Samuel’s namesake). The same occurred in 1819 at the burial of Thomasin (sometimes spelled Thomasine) Clarke. In 1820, an inspection of the vault — not a burial within it — ordered by governor Lord Combermere revealed activity yet again: When the vault was unsealed, subject was found in disarray. Each time subject was discovered to have moved, all of subject’s coffins were set to rights again before the vault was re-sealed — and each subsequent time the vault was opened, the coffins were again scattered throughout the vault.

Throughout the events occurring between 1812 and 1820, various measures were taken to detect tampering with the vault by vandals, including the laying down of fine sand (so as to display footprints) and the cementing of the marble slab at the vault’s entrance, complete with seals of government officials including Lord Combermere stamped within the cement (so as to indicate an unlawful opening of the vault). Each time, these measures were found undisturbed.

After 1820, no further activity was recorded.

Researchers have rejected earthquakes as a possible explanation for subject’s activity, owing to the fact that no notable earthquakes occurred in Barbardos at the time the activity occurred. Some researchers believe that water could account for it; the coffins being airtight, they may have floated during times the vault took on water and ended up deposited away from their typical resting places after the water receded. However, this theory has not been proven.

It is also possible that subject’s activity never actually occurred. Some researchers believe the stories — which seem to have originated with a Thomas Harrison or Thomas Orderson, described in accounts as the rector of the church to which the cemetery containing the vault and subject belonged — may be nothing more than allegories rife with Masonic symbolism.

It may be noted that a nearly identical tale later came out of a cemetery called Ahrensburg off the coast of Estonia, with the events of this version allegedly occurring in 1844.

…Or whether they are a case of history repeating itself.

Recommendation: The cemetery at Christ Church Parish Church in Oistins may still be visited today.

However, it is not recommended that Chase Vault be opened.

Even though subject may not be inside anymore, that doesn’t mean the vault is empty.

The Chase Vault at Atlas Obscura.

The Moving Coffins of Barbados at Skeptoid.

The Mystery of the Chase Vault in Barbados.