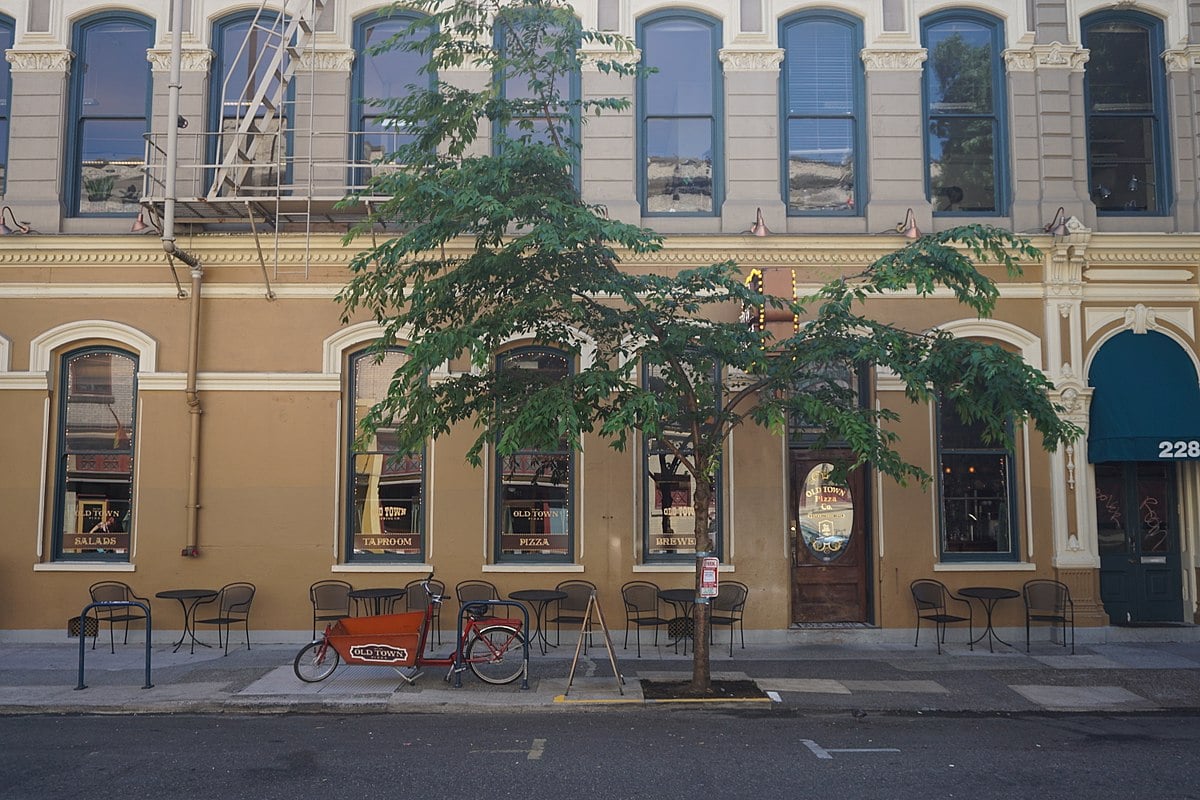 When you think of locations likely to be haunted, a pizzeria doesn’t typically top the list — or at least, it doesn’t if you haven’t been to Old Town Pizza in Portland, Oregon. If you have enjoyed a slice at this longstanding Portland favorite, then you’re probably already familiar with Nina, the ghost of Old Town Pizza. She’s been there for a long time, since many decades before the building became a pizza restaurant. Once upon a time, you see, it was a hotel — the kind of hotel where you did a lot more than just stay the night. And if the stories about Nina are true, then something terrible once happened between that building’s walls.

Portland is a fairly “new” city, all things considered: It’s only been around for about 170 years — small potatoes in the grand scheme of things. For centuries, the land on which the city is now located was occupied by several Chinook tribes; however, in the early half of the 19th century, white colonists brought with them malaria and smallpox, which wiped out huge numbers of Native people. At the same time, both American and British colonists began warring over the land. Eventually, beginning in 1843 with the formation of the Oregon Provisional Government, white colonists launched a formal takeover, pushing out Native tribes and granting parcels of what had been termed “Oregon Country” to single men and married couples.

In 1843, William Overton of Tennessee and Asa Lovejoy of Boston, Mass. filed a claim for a parcel of land on the Willamette River’s west bank. Known by trappers and traders as “the Clearing,” its colloquial name proved apt: Overton and Lovejoy immediately began clearing it of trees and building roads through it. However, Overton bored quickly of the task and sold his portion of the land to Francis Pettygrove, who hailed from Portland, Maine, in 1845. When the time came to name the town they had built on the Clearing, Pettygrove and Lovejoy flipped a coin — and Pettygrove won: The town was to be named after his hometown. The newly-established Portland, Oregon was incorporated as a city in 1851, while Oregon itself gained statehood in 1859.

Within Portland is the urban core known these days as Old Town Chinatown. Old Town Chinatown encompasses a number of areas, all of which were historically occupied by immigrants; as such, its various sections have been referred to as a number of different names over the decades, including not just Chinatown and Old Town, but also Japantown, Skid Road, Burnside, and the North End, among a variety of others. Today, it comprises two historic districts — districts which, together, give it its full name: Old Town, and Chinatown.

But beneath the surface of this area, there’s a secret — or at least, there was a secret. It’s not quite so secret anymore, but it’s fascinating all the same: Once upon a time, it’s said, there was a network of tunnels that ran under all of Old Town Chinatown, connected to the buildings above with trapdoors and leading directly to the docks. Referred to as both the Portland Underground and the “Shanghai Tunnels,” this network of tunnels is said by local lore to have earned the second of its names from the activities once said to have been conducted within it: Unsuspecting sailors were “shanghai’d” — allegedly drugged and kidnapped by “crimps” and sold into servitude aboard ships heading out to sea, frequently towards Shanghai.

But although crimping did historically happen — and not just in the United States, either — Portland historians generally agree that the “Shanghai Tunnels” likely weren’t  used for this purpose; there’s little to no archaeological evidence supporting the idea. Indeed, the “tunnels” might not have been a network at all, but rather a series of occasionally connected basements. Still, though — odd, tunnel-like basement areas do exist in Old Town, even if many of them have since been filled in, caved in, or used for public works projects. The sections that remain are very old. And even if there was no crimping going on within them, they’ve still seen lots and lots of history over the years.

It’s little wonder that many of the buildings standing atop these tunnels and basements purport to be haunted, isn’t it?

This is where Old Town Pizza comes in. Operating within what was once the Merchant Hotel, the restaurant originally opened in 1974, then owned by the Accuardi family. Adam Milne, who had fond memories of going to Old Town Pizza when he was a child, bought it in 2003 and has since expanded its not just its offerings, but also its locations: Now called Old Town Pizza & Brewing, the original Old Town location offers both pizza and Old Town’s own beer, while the brewery itself in the Northeast section of the city functions as a second, satellite location.

Her name is pronounced “Nine-ah.”

The details of Nina’s story change from time to time, but the overall outline typically remains the same: In the late 19th century, it’s said, Nina was a sex worker who plied her trade at the Merchant Hotel. Unhappy with this area of Portland’s seediness, Christian missionaries approached her about feeding them information they could use to… let’s call it “clean up the neighborhood.” In exchange, they told her, they would “free” her from her current life and help her build a different one. She agreed — but soon after, she was found dead at the bottom of the Merchant Hotel’s elevator shaft. It’s not known whether she was betrayed by the missionaries and thrown down the shaft after she had told them everything she knew, or whether she was tossed down there by one of her johns or other roughs from the neighborhood in order to keep her from talking; it could have been either, or it could have been neither. Either way, Nina met her end in the loneliest corner of the building in which she worked, and for a time, it seemed that all that remained of her memory was a brick in the wall at the bottom of the elevator shaft with her name etched into the surface.

…Except, it turns out that there may be more of Nina left than just that brick. The brick is still there, of course — it’s set into the wall of a small booth at the back of Old Town Pizza. But Nina herself might still be around, too.

She hangs around the basement, they say. If you listen closely, you might hear her breathing; if you keep your sense of smell attuned, you might catch a whiff of her perfume as she floats by; and if you get careless, you might feel a tap on your shoulder — but find when you turn around that no one is there.

You might see her ascending or descending the stairs — but she might not necessarily be corporeal when she does so. Some employees have actually seen her hanging about, fully visible and appearing as a human woman; she’s sad and mournful, and always dressed in black. (And, I mean, to be fair, I would be sad and mournful if I had died after being thrown down an elevator shaft, too.) But as one frightened delivery person recounted once to pub manager Kevin Cain, she’s also been spotted in the form of “a body of smoke” floating by the stairs in the basement. According to the delivery person, he felt a chill go up his spine when he set eyes on the smoke; then, the cloud “rushed up” the stairs.

I’ll be honest: I’m generally of the opinion that this haunting’s origin story is more local folklore than actual history. There’s a lot I haven’t been able to verify about it; I can’t tell exactly when the ghost story first started getting passed around, for one thing. Nor have I been able to dig up any historical evidence of Nina’s existence, for another. What’s more, who Nina even is tends to differ depending on the telling: Sometimes, the tale states that she was sold into a “thriving white slavery market,” while other times, the name “Nina” is said to be an Anglicized version of a Native name. (According to the Oregon-based magazine 1859, Michael Jones, whose organization, the Cascade Geographic Society, operates the tunnel touring company Portland Underground Tours, has said that his research has identified Nina as a Chinook woman whose actual name in the Sahaptin language was “Ni Mu.” Again, though, I haven’t been able to verify Jones’ research.) That is, in some versions of the story, Nina is a white woman, but in other versions, she’s a woman of color.

Both of these versions, I would argue, tap into commonly perpetuated racist tropes: Presenting Nina as a white woman sold into sexual slavery and in need of rescuing by white men both plays into ideas of white purity and implies where the threat to that purity might “really” be coming from (hint: It’s not white men). Meanwhile, presenting Nina as a woman of color sold into sexual and in need of rescuing not just by white men, but by white Christian missionaries plays into the tropes of women of color as hyper-sexual and “exotic,” as well as the white savior narrative. The fact that these tropes are so strongly present, combined with the sex-shaming and stigmatization of sex work inherent in each version of the story, makes me think that the whole thing might just be an urban legend people have come to rely on in order to explain the “Nina” brick.

But the stories persist, and the reports of odd occurrences in Old Town Pizza’s basement keep rolling in — and no doubt they’ll continue to do so. Because even if Nina’s story does turn out to be more legend than history… she might not be the only ghost there.

Another spirit has been spotted on the property, too, you see. Like Nina, it’s feminine in appearance; usually, it’s seen as a woman in not a black dress, but a white one.

No one knows who it is.

And it, too, calls Old Town Pizza home.

Along with who knows how many other… possibilities.