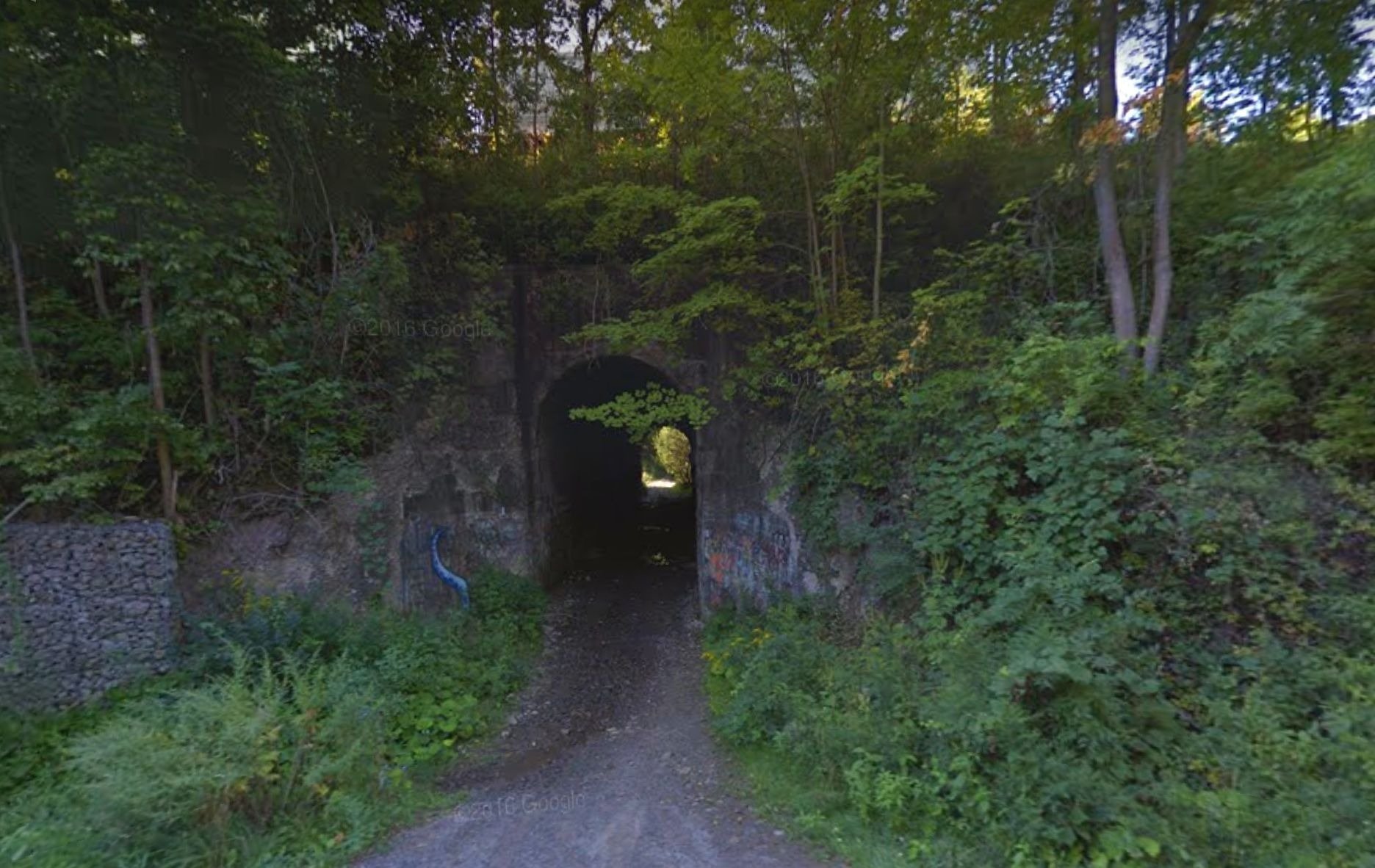 You could be forgiven for failing to notice it. It is, after all, unpaved and somewhat overgrown; moss and other greenery almost hide it from view. But it waits all the same — the Screaming Tunnel, just off of Warner Road in Niagara Falls, Canada. It waits for the brave — and the foolish — to approach it on the darkest of nights, to light a single match within its dank and dripping walls, and to hear the anguished cries of the spirit said to haunt it, right before the match goes out all on its own.

Not for nothing is it called the Screaming Tunnel.

Located in the province of Ontario, the tiny tunnel is actually not a railway tunnel — or at least, not the kind of tunnel through which any trains were meant to go. Indeed, the tunnel was never meant to be any kind of thoroughfare at all. It was built for drainage — to prevent flooding either on the nearby tracks of what was once known as the Grand Trunk Railroad (now the Canadian National Railways), according to some sources, or of farmland and fields, according to others. Over time, it also began to see use as a convenient passage through which farmers could transport animals and other goods while avoiding the train tracks above. Only about 125 feet in length and 16 feet tall, it’s made of limestone, the porous nature of which certainly would be useful for drainage. These days, graffiti lines its walls and empty beer and liquor bottles litter the ground; it remains picturesque all the same, though — even if it does smell frequently of sulfur.

Debating on whether I should open up a photography page on Instagram, should I? Here's some photos I took at the Screaming Tunnel for you! pic.twitter.com/lqATaVeP9f

But when night falls, it becomes something else — something more than a run-down, yet pretty, green-shrouded cavern tucked away by the side of the road. At night, it’s said that if you perform the correct sequence of actions, the tunnel will reveal to you its sorry history — the tragedy that once unfolded within its walls.

What that history is, though, varies depending on which story you’ve heard. Many of the legends center around a girl or young woman who lived in a farmhouse either to the south or west of the tunnel. After a fire broke out in her home, according to one version, she escaped, but only made it as far as the tunnel before the flames consuming her hair and clothing ate her up, as well; however, according to another, she was deliberately set on fire by her abusive father after her mother attempted to leave with her, again dying in the tunnel as the blaze consumed her. A third tale maintains the abusive father setting the girl alight, but changes the reason — in this version, it’s said that he kills her, rather than lose custody of her in a contentious divorce. Still other stories say that the girl — a young woman, not a child — was attacked, assaulted, murdered, or all three in the tunnel. The attacker in these versions might be someone she knows, or they might be a total stranger; either way, though, the story ends with them burning her body in order to hide the evidence.

And one story recounts a completely different tale: After vicious storms caused by La Niña conditions in August of 1924, a farmer named Donald Jordanson — whose entire crop was allegedly wiped out by the storm — suffered a break of some kind; his wife is said to have left with the couple’s young son, while he himself withdrew from the world entirely. Around this time, people from the area began going missing — and eventually, police allegedly found Jordanson at the tunnel burning a stack of human bodies a dozen corpses high. Jordanson is then said to have died by suicide, throwing himself on his own pitchfork.

Near Niagara Falls in Ontario, Canada, there is the Screaming Tunnel. According to legend, a young girl was burned alive by her father in it pic.twitter.com/tBUKP08cYz

Unfortunately — as is often the case with urban legends — there’s no historical evidence that any of these events actually transpired. According to Falls Avenue Report, no “confirmed incidents of such crimes inside the tunnel” have ever been recorded; nor has the identity of the girl or young woman who allegedly perished in these non-existent crimes been discovered. Additionally, the Toronto and Ontario Ghosts and Haunting Research Society tried and failed to dig up any property records for the house near the tunnel that features so prominently in so many of the stories.

I’m even more skeptical about the Donald Jordanson story than I am about any of the others. I’ve only found one source discussing it, and no evidence that a massacre of the type described in it ever occurred. The storms did happen; however, nothing else — not the disappearances, not the body burning, not even any of the names, either Jordanson’s, or any of the neighbors said to have been his victims (Frank Male; “Ethal Davison,” which is likely a misspelling of Ethel Davison; John Frew), checked out. Could I have missed something? Of course. But for an alleged crime this gruesome… well, you’d think more people would be talking about it if it were true.

But even so, the stories persist — and so, too, does the challenge that forms the second half of the legend. Like many such challenges, there are a few different sets of rules floating around; generally, though, they all involve entering the tunnel when it’s dark out setting something alight within it. According to some versions, it’s enough just to go to the tunnel at night, while according to others, it has to be a particular time — midnight, usually — or even a particular date (Halloween, of course). The item you’re to burn is most frequently a single match, with some sets of rules specifying that it must wooden — but sometimes, it doesn’t matter what you light on fire; it just matters that there is fire.

DAY 2: “The Screaming Tunnel”, located in Niagra Falls, is said to be haunted by the ghost of a girl who ran into the tunnel and burned alive after her family’s farm was set ablaze. Some say you can hear her final screams echoing in the darkness each night…#61daysofhalloween pic.twitter.com/9NdouZZIZx

And as for what happens when you perform these actions correctly? You might hear feet pounding as they run to escape the tunnel, or even smell the char of burning flesh; you might not, though. You will always experience two things, though: One, you’ll hear a heart-rending scream; and two, the match will blow out suddenly, even if there’s no breeze.

Or at least, that’s what the stories say will happen. Experiences vary; the match or may not go out, and the scream might just be the wail of a passing train as its brakes squeal on the tracks. If the stories aren’t true, then the game probably isn’t true, either.

But then again, if you play by the rules, maybe something will happen. You might see the match go out, or hear footsteps at the other end of the tunnel. You might feel a sudden and overwhelming sense of panic — panic that seems to belong to someone else, not you yourself. You might even hear an additional voice — that of an angry man, booming and deep.

Maybe the tunnel will scream for you.

And maybe that’s all it wanted all along — someone to listen.