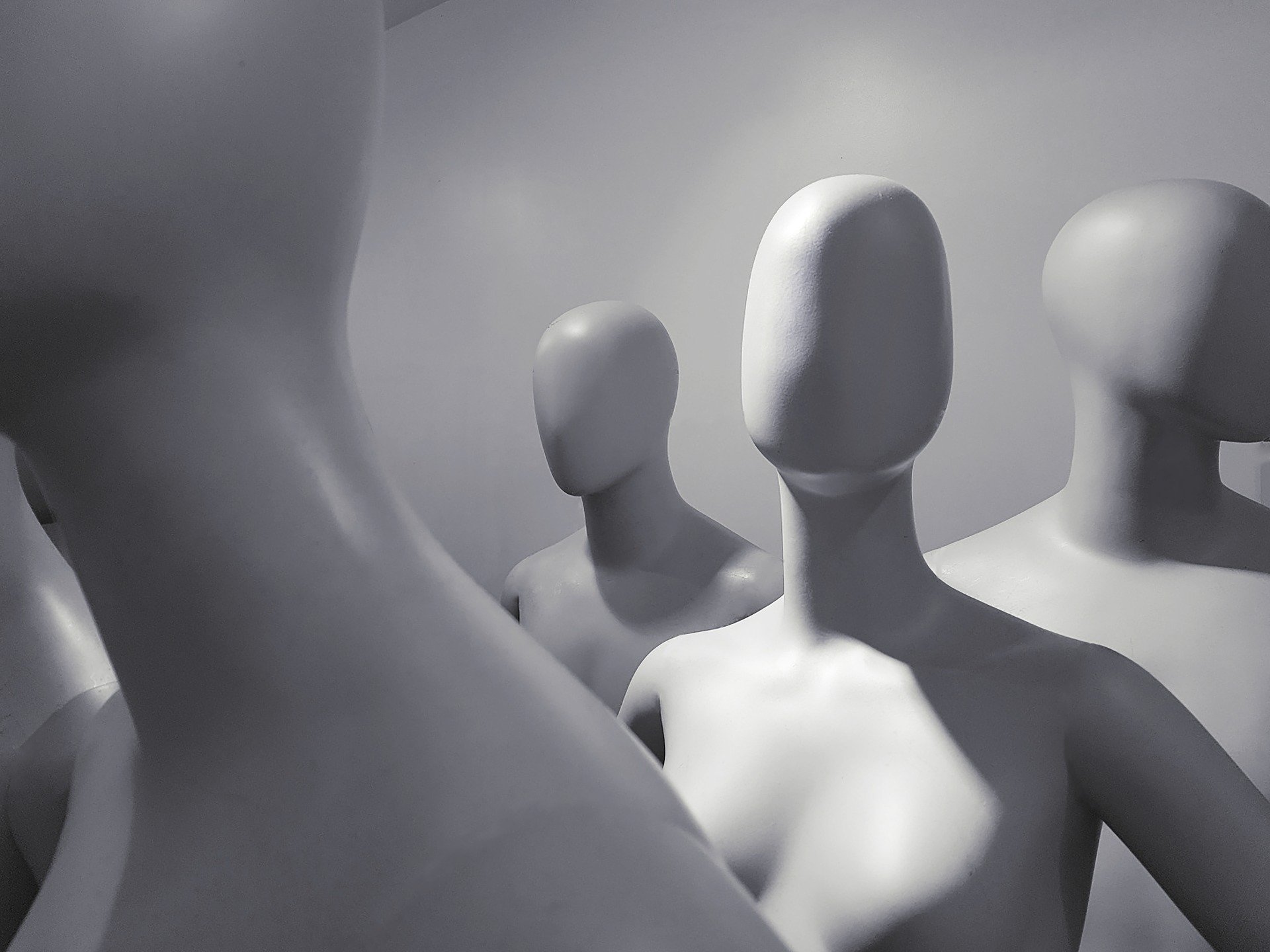 For at least 10 years — possibly longer — the John Lawson House, which is located at 9A Main Street in New Hamburg/Wappinger Falls, New York, was known for a curious reason: A trio of mannequins lived on its porch. Life-sized, they were the kind of mannequins you typically see in clothing stores. Their wardrobes changed on occasion; so, too, did their wigs and accessories. They were seen posed with a wide variety of items: An old plastic milk container holding potpourri. An empty birdcage. Books. Towels. Tool boxes. They sometimes disappeared when it rained, then returned with better weather.

As far as anyone knows, the mannequins moved all on their own.

But although its address is sometimes listed as 9 Main Street as opposed to 9A Main Street, the house is more commonly known by a different name entirely: The John Lawson House — John Lawson, of course, being the fellow who built it.

9A Main Street in April of 2012, via Google Street View. The mannequins appear to have been absent the day the image was captured.

Unfortunately, I’ve been unable to find out much about Lawson. There are several John Lawsons buried in New Hamburg according to both Find A Grave and the book Old Gravestones of Dutchess County, but none of them appear to be the John Lawson who built this house. One of them, for example, died in 1834, some six to 10 years before the house was built. The dates of another John Lawson sound about right — he lived from 1801 to 1873 — but he’s listed as John M. Lawson, while the John Lawson for whom the house is named is usually referred to as John A. Lawson. It’s possible that the John Lawson in question is buried elsewhere, of course; absent any concrete evidence either way, though, he remains something of a mystery.

What we do know about John A. Lawson is that he was a descendant of one of the first white colonist families to forcibly take over the area. (Starting with Henry Hudson’s 1609 conquest, the Wappinger people who were indigenous to New York and Connecticut were gradually forced out by white colonists; in Dutchess County, a 1683 “Indian Deed of Sale” resulted in the Wappinger having their ancestral lands swiped out from underneath them.) We also know that his house at 9A Main Street was passed down to another Lawson, Cornelius, in the early 1850s. Cornelius may have been responsible for adding the cross gable and pattern book embellishments; we know that those features were added sometime after 1850. Real estate records indicate that further renovations occurred after the Lawsons’ time in 1950 and 2005.

As you might expect, a house this old has seen quite a lot over the years — and although it’s not totally clear when the mannequins first appeared on the John Lawson House’s porch, some believe that their presence has something to do with two tragedies that occurred within shouting distance of the property just a few decades after it was built. 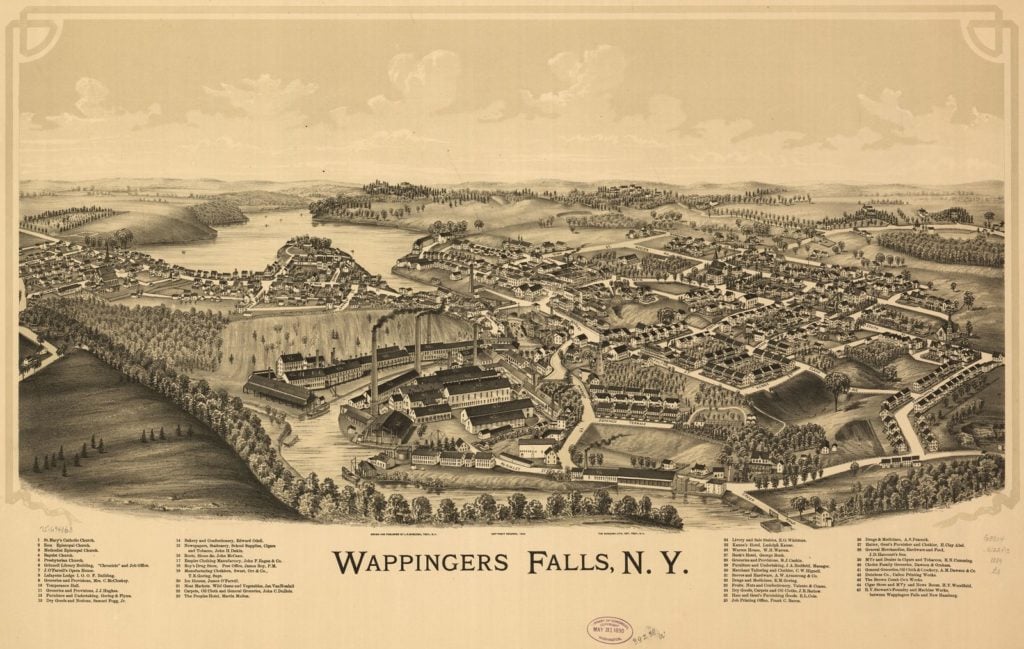 The first occurred on Feb. 6, 1871. That night — in the middle of a two-week cold snap — a southbound, 25-car freight train on the Hudson River Railroad line derailed due to a broken axle as it approached a drawbridge over Wappinger Creek. It landed on the northbound track, where it subsequently struck by a northbound passenger express train which had been unable to stop in time.

The freight train carried several oil tank cars — including the one that derailed.

You can imagine what happened next, can’t you?

Everything went up in flames. The bridge on which the two trains sat collapsed. Cars plummeted into the icy river below. The crash claimed 22 lives.

And all of that went down only about 200 feet from the John Lawson House.

Nor was that the only tragedy 9A Main Street bore witness to during the 1870s. Just six years later, on May 3, 1877, a major fire took out seven buildings, including a store, a barn, and four houses. The John Lawson House was one of the few surviving structures.

It is these two events that many believe the mannequins represented — and, indeed, some believed they might even be possessed by the spirits of those who died in the tragedies. As Atlas Obscura noted several years ago, one fairly recent photograph documenting the position of the mannequins showed two of them facing “an abandoned building down the road that is well known as the only other surviving historical house on the block,” while the other faced the Hudson River. The implication, according to those who subscribed to this analysis, was that the mannequins facing the abandoned house were perhaps possessed by people who died in the fire, while the one facing the Hudson may be the spirit of a train crash victim.

Find out more about: The Mysterious Moving Mannequins of the John Lawson House. #ghoststories https://t.co/Dpv9nP33jM pic.twitter.com/bgP5CoIgJ8

On closer examination, this theory might be stretching it a bit. The train crash occurred not directly on the Hudson River, for example, but a bit further east over Wappinger Creek — that is, it’s not clear whether the direction the mannequins were facing is actually where the crash occurred in relation to the house. (To be fair, though, Wappinger Creek does feed into the Hudson, so there’s at least some connection there). Furthermore, I haven’t been able to confirm which building the mannequins were reportedly pointed at or whether it really was a surviving building of the 1877 the fire. But even setting aside the possibility of ghosts, the mannequins are still plenty eerie all on their own. The fact remains that no one knows who was moving them — or why they were even put out on the porch in the first place. And that is, to put it bluntly, really, really weird.

But I might have an answer to at least part of the mystery.

I think I know who was behind the moving mannequins.

Stay with me, now.

I haven’t been able to dig up the property records for the house’s entire history — it is, after all, around 175 years old — but it’s possible to piece together a rough idea of who owned it when during the past 15 years or so. According to Realtor.com, 9A Main Street was sold on Dec. 11, 2002 for $164,500. Redfin, meanwhile, pegs the date of sale as Jan. 10, 2003. I’m interpreting this to mean that an offer was accepted for the house in December, and that the closing occurred in January. The next date of sale listed for the property on pretty much every major real estate database is Oct. 9, 2015, so presumably 9A Main Street was put on the market by the people who bought it in 2002-3 sometime prior to the fall of 2015. The going price at that time was $250,000.

As far as I know, the folks who bought the house in 2015 still own it today; it’s been put on the market a few times since then, but the records don’t indicate that it’s ever actually sold. It was most recently listed in April of 2017, but appears to have delisted a few months later in August. It’s remained off the market since then.

The John Lawson House may be the creepiest house in America. The porch is occupied by life-sized female mannequins pic.twitter.com/rx1INbNhWo

This is pure speculation on my part, but I think it’s possible that the current owners may have originally intended to flip the house. The listing from 2017 describes 9A Main Street as a “beautifully renovated Victorian-era home” — and, indeed, the photos paired with this listing show a beautifully renovated Victorian-era home. It has an open floor plan on the ground floor with a gorgeous, new kitchen; there’s a full master suite, along with several other bedrooms; the heating, plumbing, and electric systems have all been updated; and there’s a new roof and new windows, along with all sorts of other bells and whistles. Also, the asking price when it was initially listed that April was $600,000, according to Realtor.com — a full $350,000 more than what it had gone for less than two years prior.

(It’s also possible that these “beautiful renovations” were carried out prior to 2017, of course; the jump in price over a brief amount of time indicates house flipping to me, which is why I suspect the renos were done between 2015 and 2017, but I could be wrong. Do with that what you will.)

I did manage to track down the names of the two most recent owners of the house — the ones who bought the house in 2002-3, and the ones who bought it in 2015. I’m not going to list their names here for ethical reasons (they’re private citizens, after all), but the information is publicly available if you look in the right places. And reading between the lines of the property records and a few other pieces of information floating around, I believe the people who owned the house from 2003 to 2015 are the ones who were responsible for the mannequins. Not ghosts; just people.

Solve the Mystery of the Moving Mannequins of John Lawson House https://t.co/g2vgPOkLKr pic.twitter.com/r5hAH1l5Vn

But answering the “who” of the mystery is the easy part. The hard part is answering the “why” — and that part of this case remains unresolved. Did they intentionally create a mystery? Were they executing some kind of art project? Was it just something they did to pass the time? The only way we’ll ever know is if they speak up about it themselves, which they haven’t so far. Could I try to contact them myself? Sure, but I’m a bit reluctant to do so. They likely wouldn’t appreciate being cold-called by a random journo about their hobbies — and that’s assuming I’ve correctly identified them. If I’ve gotten it wrong — which is a possibility! — they’d be even less likely to appreciate being cold-called by a random journo about something they don’t even have anything to do with.

(That said, though, if you’re out there, John Lawson House mannequin people, and you do decide you’d like to speak publicly about the mannequins, please feel free to get in touch with me here — I’d love to chat with you!)

I do think I know where the mannequins are now, by the way. The former neighbor who spoke with Atlas Obscura declined to identify the exact address of the property, but identified is as being on Route 9W and described it as not visible from the main road due to its long driveway. I cross-referenced the name of the seller from 2015 with addresses located on Route 9W in New Hamburg/Wappinger Falls that fit that description — and I’m pretty sure I’ve managed to pinpoint the location. Again, I’m not going to list it because the homeowners are private citizens, but if it’s where I think it is, it’s off Route 9W near a couple of car dealerships and a liquor store.

Don’t actually go there bothering them or trespassing — again, they’re private citizens, and their home is private property — but look at it this way: If I can follow the rabbit hole deep enough to find an address with no other resources than an internet connection, you can, too. So even if you don’t actually visit the mannequins at their new home, you can at least experience the satisfaction of knowing where they (probably) ended up.

And besides: Some mysteries are better left unsolved.