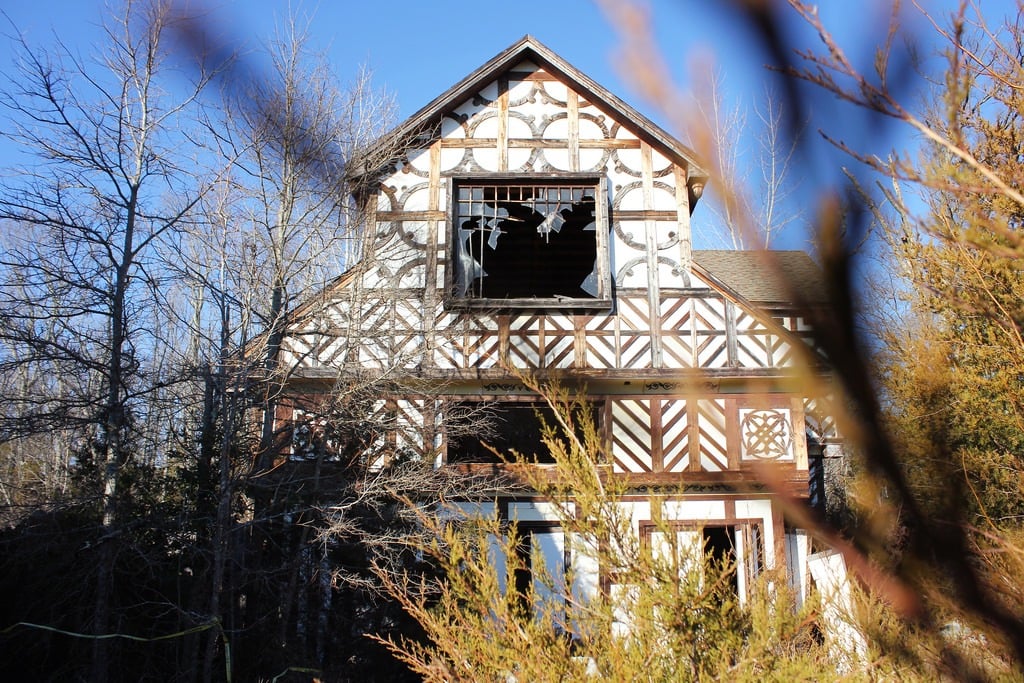 In an area of Virginia known locally as Sherwood Forest — yes, really — there’s a Renaissance faire once known for its splendor. Or at least, there was a Renaissance faire; the abandoned Virginia Renaissance Faire in Fredericksburg hasn’t sold a turkey leg or tankard of mead for almost 20 years. It’s located just off of Kings Highway — but despite its seemingly perfect setting (Sherwood Forest! Kings Highway!), the short-lived festival was an abject failure. Now, the remains of the Tudor-style wonderland sit, quietly collapsing, in their wooded grove.

In the United States, the origin of Renaissance faires as we know them today is usually credited to Phyllis Patterson, a drama teacher operating out of the Laurel Canyon neighborhood of Los Angeles. In 1963, Patterson spearheaded the expansion of a theatre program she taught out of her backyard into a two-day fundraiser for the radio station KPFK. She called it “The Renaissance Pleasure Faire & May Market” — and it proved so popular that it became a recurring event. Then it became two recurring events, one in Southern California and one in Northern California, both branded under the name “The Renaissance Pleasure Faire” and run by Patterson’s nonprofit, the Living History Center. Over the next several decades, more and more Ren faires began to pop up across the country; these days, most of them are run by for-profit entertainment companies — and boy, are there a lot of them. All it takes is one look at Renaissance faire database The Ren List to see that.

The grounds of a Renaissance faire may be one of three types: Temporary, semi-permanent, or permanent. They’re all pretty much what they sound like. Temporary ones take up residence in parks, fairgrounds, or other similar areas for brief amounts of time, with most of the activities and vendors housed in tents. Semi-permanent festivals usually run for longer. Permanent festivals, meanwhile, might run for several months at a time and have fully-built buildings on their grounds. For whatever it’s worth, most of the Ren faires I’ve been to — namely the Pennsylvania Renaissance Faire in Manheim, the Maryland Renaissance Festival in Crownsville, and King Richard’s Faire in Carver, Mass. — are permanent ones.

The Fredericksburg faire, which was run by Renaissance Entertainment Corporation (now Renaissance Entertainment Productions), was meant to be a permanent one. Built on land that had once been owned by Mary Ball Washington — that is, George Washington’s mother — it cost several million dollars to get up and running. According to a 2002 annual report for the company under sections 13 and 15(d) of the Securities Exchange Act of 1934, Renaissance Entertainment Corporation bought 250 acres of land in Stafford County for $925,000 on July 27, 1995; then, they took a $1.5 million mortgage to help finance construction. DCist reports that, once all was said and done, the entire purchase and renovation cost “upwards of $5 million.” 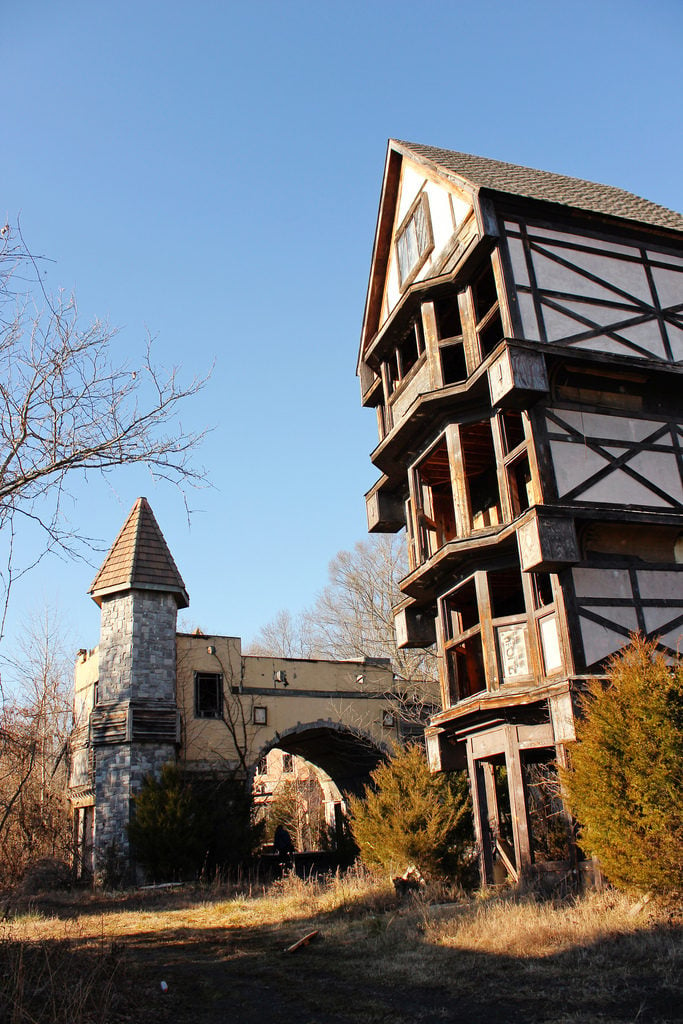 The faire had its opening day at the beginning of May in 1996. Its first season promised to amaze and entertain each Saturday through June 16, according to the Baltimore Sun; at the time, reported the paper, “time-travelers visiting the Faire will enjoy continuous entertainment on the Faire’s stages and arenas, including the remarkable ‘Birds of Prey Falcons and Hawk Show,’ three ‘Royal Jousting Tournaments,’ the crazy antics of the Sturdy Beggars in ‘The Mud Show,’ and military drills by the Queen’s Royal Guard.” Additionally, “lively merriment, bartering, feasting and the hearty way of life during the days of Queen Elizabeth I” was promised to be “re-created in every detail by costumed performers, actors, minstrels, dancers and musicians joining artisans, crafts people and food and beverage purveyors.” Tickets ranged from $6.50 to $14 for single-day passes, with season tickets costing $54.

But the festival wasn’t nearly the hit that its investors were hoping for. Plagued by poor weather — which, no doubt, wasn’t helped by the geography of the site; Fredericksburg tends towards hot, humid summers, and the fairgrounds are often described as having been situated in what was basically a swamp — ticket sales remained low; indeed, by 1999, prices had actually dropped, with the Baltimore Sun reporting that a day pass for that season was $11 for adults and $.450 for kids ages 6 to 12. Children under 5 were admitted free. Were the dirt-cheap prices a last-ditch attempt to try to pull in visitors? Maybe. If it was, though, it wasn’t enough. Neither was the second mortgage for $750,000 Renaissance Entertainment Corporation took out on the property in March of 1999.

In this week's Abandoned D.C., we explore the Virginia Renaissance Faire in Fredericksburg. http://t.co/cUox59WNoN pic.twitter.com/Euy84BzmuF

According to the 2002 annual report, the Board of Directors opted to discontinue operations of the Virginia Renaissance Faire on Oct. 27, 1999; the closure was formally announced on Jan. 28, 2000. The property was sold in August of 2001 for $1.3 million. Under the new name of Renaissance Entertainment Productions, the company still runs several other Ren faires in the United States.

But although the land is still used by a sportsman and hunting club, the site of the Ren faire hasn’t been touched since its closure. Tudor-style buildings with thatched roofs and conical towers lie decaying in the woods, collapsed and overgrown. Walls and masonry have tumbled. Windows are smashed. A ship rots in the water. It’s an eerie sight, full not just of the memories of the faire itself, but of the specter of what never was.

It’s difficult to visit; it’s private property and monitored by the Stafford County Sheriffs Department, according to Atlas Obscura, with trespassers being subject to prosecution. Don’t try to set foot on the grounds without permission — and if you do get the okay to go, be careful; the buildings are in a dangerous state of collapse. But if the photographs and videos of those who have managed to get into the Tudor-inspired ghost town are anything to go by, what awaits you is as beautiful as it is sad.

There is still a Virginia Renaissance Faire, by the way. After the closure of the Fredericksburg faire, a group of volunteers who had been involved with the defunct festival banded together to form Out of the Woodwork Productions, a 501(c)3 nonprofit educational organization that now produces the current Virginia Renaissance Faire. The festival is in Spotsylvania at the Lake Anna Winery and usually runs for a month between May and June. The 2019 season might be a ways off, but when it arrives, it’s sure to be a good time. Find out more here.

[Photos via Fire At Will Photography (1, 2)/Flickr, available under a CC BY-SA 2.0 Creative Commons license.]