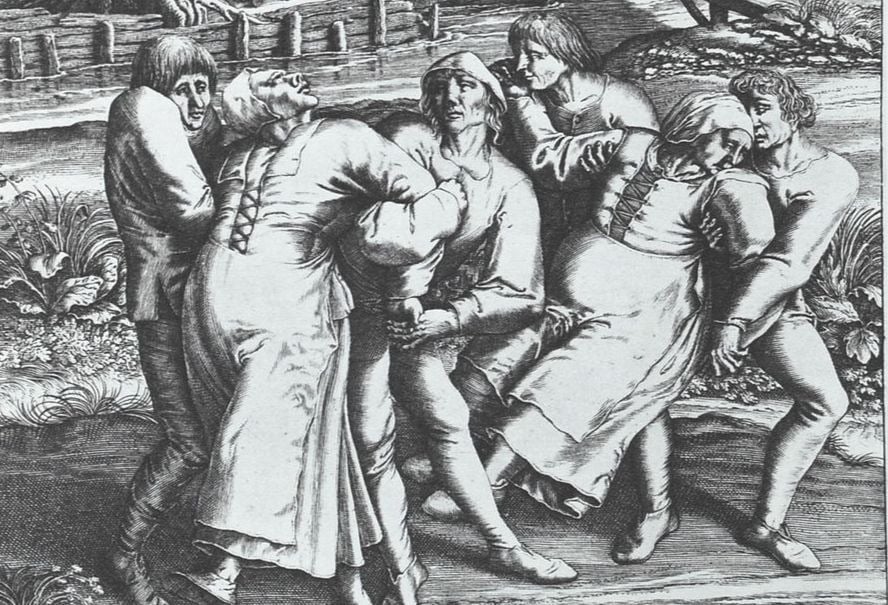 In 1518, a plague struck Strasbourg in the Alsace region of France, then part of the Holy Roman Empire. I’m not talking about the Black Death, though — I’m talking about what’s known as dancing mania. Referred to as the Dancing Plague of 1518, the Strasbourg outbreak saw around 400 people taking to the streets to dance furiously and continuously for days on end. In case you’ve ever wondered whether it’s possibly to literally dance yourself to death… the answer is yes. It is.

Wikipedia actually has a couple of pages about this phenomenon, including one for dancing mania more generally and one specifically focusing on the Dancing Plague of 1518. All of them are pretty weird, though — largely because we don’t really know what causes dancing mania, or even what it really is. What we do know is that instances occurred primarily between the 13th and 15th centuries in Europe (although there are outliers, of course), and that when happened, they killed hundreds and, in some cases, thousands of people; exhaustion, heart failure, or other ills brought on by the constant activity were typically to blame.

Patient zero for the 1518 plague is referred to in the historical record as “Frau Troffe”; she began dancing in the street in Strasbourg in July that year. After a week had gone by, 34 more people had joined in — and by the end of the month, the number of dancers had swelled to about 400. It continued for around two months before it started to abate; it’s believed that at its height, the plague killed 15 people a day.

But the 1518 plague isn’t the first to have occurred; indeed, it’s actually believed to have been the last. What makes it stand apart is the amount of historical evidence we have about it — but there were certainly others we know of, too. For example, one of the earliest major outbreaks actually began a century and a half earlier in another city located in the Holy Roman Empire, Aachen. The 1374 outbreak spread widely, encompassing a number of towns along the Rhine river valley — but it, too, is as puzzling as the 1518 plague.

Although what might actually have been going on during these bouts of dancing mania is largely still a mystery to us, historians regularly theorize likely possibilities. Religious fervor is one such possibility; indeed, several of the phenomenon’s other monikers reveal a bit about what folks who actually lived through instances of dancing mania thought about the whole thing: Terms like “St. Vitus’ Dance” and “St. John’s Dance” suggest that it was believed to have been a curse sent by St. Vitus or John the Baptist. More recently, ergot poisoning, cult worship, and mass psychogenic illness have been offered as possible explanations for dancing mania.

No matter which you slice it, though, dancing mania is a pretty unsettling concept. Good thing it mostly died out after the 151 plague, right?

“A Strange Case Of Dancing Mania Struck Germany Six Centuries Ago Today,” by Marissa Fessenden. For Smithsonian.com, Fessenden offers an overview both of dancing mania in general and of the most prevalent theories as to what it really was. It’s brief, but it’s a good place to start.

“The Town That Nearly Danced Itself To Death” at BBC Future. A short, animated video from BBC Future giving another brief overview of the 1518 plague.

The Dancing Mania distinguishes between St. Vitus’ Dance and St. John’s Dance, notes how the characteristics of the phenomenon differ depending on where it’s being observed, and much, much more. It’s both a medical text and a historical one, so it’s admittedly not super accessible — it’s fascinating all the same, though. Read it for free at Project Gutenberg or as an Amazon Kindle book; you can also buy a hard copy on Amazon for about $6.

“The Pied Piper Of Hamelin.” I find fairy tales fascinating for a number of reasons, but the story of the Pied Piper holds my attention perhaps more than any other. Why? Because we’re pretty sure that it arose out of something traumatic that actually happened in the town of Hamelin sometime during the medieval era — but we don’t know what that event really was. All we know is that it likely resulted in the loss of an entire generation of children.

I find that fact incredibly eerie.

It’s thought that at least part of the story’s roots might lie in dancing mania; just as the people of towns afflicted by a dancing plague danced their way to their deaths, so too do the children of Hamelin dance to their demise — or at least, that’s presumably what happens. Some versions of the story are explicit, noting that the town’s children follow the piper into the river to drown; others, however, note that he simply leads them away.

“This Fungus Was A Medieval Mass Murderer,” by Esther Inglis-Arkell. A rundown from io9 on ergot, a fungus which can grow on cereal grains — and which, when ingested by humans, has some really unfortunate side-effects. Ergot poisoning is sometimes offered as a possible explanation for dancing mania, although these days, it’s not regarded as a super convincing theory; the same goes for the theory that ergot poisoning caused the Salem witch trials. (Although ergotism is still commonly cited as the “real” reason the Salem witch trials happened, most historians no longer believe that that’s the case.) Still, though, it’s worth considering, give how prevalent ergot poisoning was during the medieval era.

“Rethinking The Dancing Mania,” by Robert E. Bartholomew. In this 2000 piece for the Skeptical Inquirer, Bartholomew pokes holes in some of the most misconceptions about dancing mania and the related phenomenon of tarantism. He ascribes to the cult worship theory; as he puts it, “Based on an examination of a representative sample of medieval chronicles, it is evident that these episodes are best explained as deviant religious sects who gained adherents as they made pilgrimages through Europe during years of turmoil in order to receive divine favor.”

“Dancing Plagues And Mass Hysteria,” by John Waller. Waller has written extensively about dancing mania; published in 2009 by the British Psychological Society’s The Psychologist, this piece is just one of many he’s penned on the subject. He’s a proponent of the mass psychogenic illness explanation, noting that “fearful and depressed communities were unusually prone to epidemic possession” — something which is worth examining a little more closely when you consider that there’s definitely “a well-established link between psychological stress and dissociation.” Waller’s “A Forgotten Plague: Making Sense Of Dancing Mania,” published by the journal The Lancet in 2009, is also worth checking out.

The Dancing Plague: The Strange, True Story Of An Extraordinary Illness. Waller’s book about dancing mania, published in 2009. It was quite well reviewed, praised for both its academic rigor and its accessibility; Kirkus Reviews called it “an original, curious subject rendered in readable prose.” It’s available via most major online book retailers, although you might also check your library. Mine has it in hard copy, for example, although not as an e-book. (Related: If you do a lot of reading via e-book, I highly, highly recommend the Library Extension for Chrome — whenever you look up a book on Amazon or wherever, it automatically tells you whether or not it’s available at your local library.)

For the curious, Waller has also written a book specifically about the 1518 dancing plague; it’s called A Time To Dance, A Time To Die. (There is a season, after all.)

“5 Historic Manias That Gripped Societies, Then Disappeared,” by Linda Rodriguez McRobbie. On Mental Floss, a few other unusual manias that were once huge, but haven’t been seen much in recent years, decades, or centuries. Think dancing mania is creepy? Wait ‘til you read about laughing mania.

Buffy The Vampire Slayer season 6, episode 7: “Once More With Feeling.” The infamous musical episode of Buffy The Vampire Slayer, which originally aired on Nov. 6, 2001, features a demon whose influence causes the whole town to break out spontaneously into Broadway-style song-and-dance numbers. It’s perhaps only tangentially related to the topic at hand — but as the episode progresses, it does become apparent that the literal song-and-dance routine is a curse, rather than a blessing; what’s more, we do in fact witness one poor, nameless Sunnydale citizen dance himself to death as a result of the demon’s influence. The similarities are hard to miss. You can buy the episode on Amazon here; it’s also currently available to watch at Daily Motion, although it’s likely that it’ll get taken down at some point because, y’know, copyright law is a thing.

Dancing Plague Of 1518 by Niege Borges. An art project by Brooklyn-based, Brazilian artist Niege Borges with a humorous, pop culture bent. Wrote Borges, “This project is, in some sort of way, a memorial for Frau Toffea. From the silliest little dance to the most elaborate dance sequence of the history of cinema, there were a lot of dancing in the last decades (not enough to kill anyone, I hope).” Check out the full series on Tumblr, buy prints on Society6, and see more of Borges’ work here.