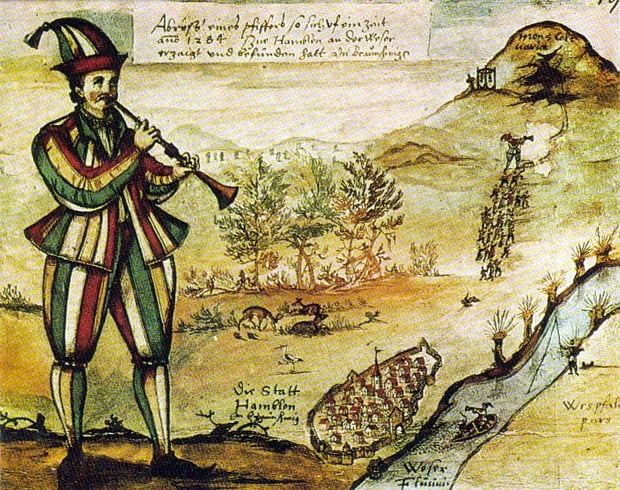 Fairy tales are worth a closer look for the same reason that a lot of modern urban legends are — there’s often more going on there than just a gruesome tale meant to frighten children before bed. That’s the tack that “The Pied Piper” takes, examining the possible roots of the story of the Pied Piper of Hamelin.

The stained glass window mentioned in this story did, at one point, exist; so, too, does the Lueneburg Manuscript. In fact, most historians and theorists are in agreement that tale of the Pied Piper arose out of something traumatic that happened in Hamelin in the 13th century — something that resulted in the loss of the town’s entire population of children.

Exactly what happened, though… that, we don’t know. And what’s more, we probably never will.

And that’s the creepiest thing of all.

If you visit Hamelin today — it’s in Germany near Hanover — stop by Bungelosenstrasse, or “Drumless Street”; it’s the last place the children were said to be seen before they vanished all those centuries ago. And if you’re as interested in creepy riffs on already-creepy fairy tales as I am, you’ll probably dig the play The Pillowman by Martin McDonagh. John Crowley’s production of it remains one of the finest pieces of theatre I’ve ever seen; it’s a remarkable read all on its own, though, so it’s worth checking out… just maybe not as a bedtime story.

In a town called Hamelin in northern Germany, a stained glass window made in the year 1300 and kept until the 17th century in the market church depicts an event where the children were in danger.

A more chilling documentation from the town’s chronicle in the year 1384 reads, “It is 100 years since our children left”.

This is the account of the Pied Piper, named for his fanciful or “pied” clothing and the silver pipe he played. According to legend as well as several personal written accounts, the man lured the children never to be seen again. One documentation from a Lunenberg town chronicle from 1430-1450 reads:

“Here follows a marvellous wonder, which transpired in the town of Hamelin in the diocese of Minden, in the Year of Our Lord, 1284, on the Feast of Saints John and Paul. A certain young man thirty years of age, handsome and well-dressed, so that all who saw him admired him because of his appearance, crossed the bridges and entered the town by the West Gate. He then began to play all through the town a silver pipe of the most magnificent sort. All the children who heard his pipe, in the number of 130, followed him to the East Gate and out of the town to the so-called execution place or Calvary. There they proceeded to vanish, so that no trace of them could be found. The mothers of the children ran from town to town, but they found nothing. It is written: A voice was heard from on high, and a mother was bewailing her son.”

However several other documents from surrounding areas spoke of this event. Nearly three centuries since the initial incident, people of surrounding towns in Germany feared the return. A chronicle of the town of Bamberg in 1553 reads:

“There is also a mountain which lies approximately a rifle shot away from this town, called Calvary, and the townspeople say that in 1283 a man was seen possibly a musician, wearing clothing of many colors and possessing a pipe, which he played in the town. Whereupon the children in the town ran out as far as the mountain, and there they all disappeared into it. Only two children returned home, and they were naked; one was blind and the other mute. But when the women began to look for their children, the man said to them that he would come again in 300 years and take more children. 130 children had been lost and the people of this place were afraid that the same man would come again in 1583.”

The number of children and the precise names of the areas all match, something very rare for history especially in Europe at that time. For most Europeans in those centuries, estimation and near guesses followed particular superstitions. Just wives’ tales and folksy legends.

However, not the case this time.