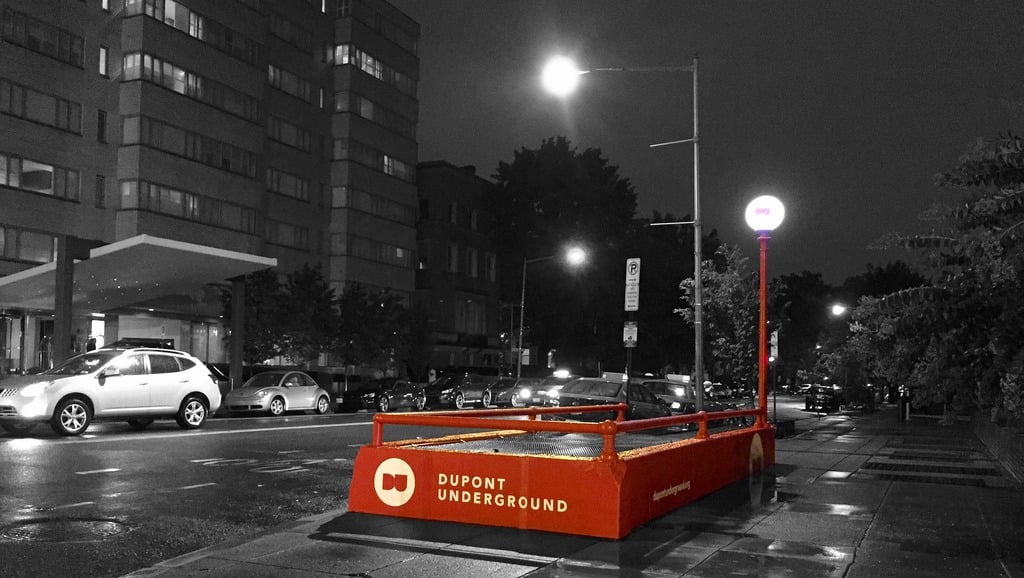 Washington, DC isn’t a great city for urban exploration. Historically, there hasn’t been a lot of industry here that would lead to the kinds of spaces urbex enthusiasts typically gravitate to — but we do have one thing going for us on that front: We’ve got the hidden tunnels underneath Dupont Circle now known as the Dupont Underground. As you may have guessed from a few other oddities we’ve examined here at The Ghost In My Machine — namely the Seattle Underground and the old City Hall subway station in New York — I’m endlessly fascinated by underground tunnel systems, and all the more so if they’ve been abandoned or forgotten about by the mists of time; I was therefore thrilled to discover that DC — a city I never anticipated moving to, but which I’ve called home for the past several years — has its own set of hidden tunnels far below the surface of one of its most identifiable neighborhoods. And these days, there’s some exciting stuff going on down there, indeed.

The Dupont Underground saw its beginnings more than a century ago, according to Smithsonian.com, when the first electric streetcar arrived in DC circa 1890. The streetcar system was a revelation in the way that almost all forms of public transit are during their very early days; both cleaner and faster than horse-drawn carriages, the streetcars completely changed how everyday citizens got around the city. The system’s popularity came at a cost, though: It caused congestion on the streets the likes of which DC had never before seen. In an attempt to solve this issue, it was determined that parts of the trolley system would be brought underground, thus clearing up some of the above-ground traffic — so in 1949, the first underground streetcar stop was built underneath Dupont Circle.

Alas, though, it was also fated to become the only streetcar stop ever built in DC. Even during its heyday, the trolley system would come under threat from more advanced modes of transportation; the taxicab and the bus, both of which ran on gasoline, arrived within the first few decades of the 20th century and steadily grew in use as the years rolled on. Then, in 1955, a seven-week trolley worker strike begun to protest low wages crippled the system in the dead heat of summer — which, in turn, led to the sale of the Capital Transit Company, which held a monopoly over the streetcar system, to New York financier O. Roy Chalk. As part of this deal, a requirement that the trolleys be retired in favor of developing the bus system was put into place. The streetcar system subsequently shut down for good in 1962, the tracks were largely either removed or paved over, and the entrances were shut up tight.

The tracks and platforms of the Dupont streetcar station, however, remained — so it’s perhaps unsurprising that a few attempts have been made over the years to repurpose the space for other uses. During the Cold War, for example, it was maintained as a fallout shelter; after 1975, however, this use was discontinued, and the space was left to rot. In 1982, a proposition to turn the tunnels into a “national sanctuary for the ashes of the dead … didn’t gain much interest,” according to the Washington Post; then, in the mid-‘90s, an ill-fated attempt to turn the space into an underground food court failed spectacularly, with “Dupont Down Under,” as it was called, opening and closing within a matter of months due to poor ventilation and lighting, employee dissatisfaction, lawsuits against its owner, and a simple lack of customers. Throughout the early and mid 2000s, suggestions ranging from building commuter bike parking  in the tunnels to turning the space into a network of adult clubs and LGBTQ-friendly nightlife destinations popped up from time to time — but concrete action towards building these proposed developments was never taken, and the station and its tracks sat abandoned instead.

Urban explorers who managed to find a way into the tunnels during this time — no small feat, given the sturdy bolts that firmly blocked off all of the known entrances — found everything from the moldering remains of the food court to evidence of a homeless camp. There’s also reference in a 2004 piece about the “caverns and canyons of the Capitol” published by the Washington Post about a body that was discovered in the tunnels that January; unfortunately, though, I’ve been unable to dig up any further information about it.

But in the early 2010s, a new move to revitalize the disused space began — and this time, it’s come to fruition: The nonprofit Arts Coalition for the Dupont Underground (ACDU) took on the challenge of adapting the station’s two platforms and sections of the tunnels into art space, eventually opening to the public in 2016. They called the space the Dupont Underground.

The new space ended up being somewhat scaled down at its initial opening from what it was intended to be due to challenges not discovered until planning began in earnest — challenges which would have cost 30 times what ACDU raised for the projects. But art installations and other programming has gone up regularly in the tunnels since then; in fact, I was able to visit one myself back in February. For their 2017-2018 season, immersive theatre company TBD Immersive devised two timely original works, In Cabaret We Trust and Cabaret Rising, which detailed the rise and fall of both an oppressive government regime and an underground resistance cabaret. The second show, Cabaret Rising, was staged in the Dupont Underground, and while I thought it was certainly flawed, it was fascinating all the same, with solid world-building that encouraged exploration and rewarded curiosity. Think Sleep No More, albeit less abstract and on a much smaller scale.

Check it out, if you can. There are plenty of stories the space has to tell… if only you’re willing to look for them.

[Photos available under a CC BY-SA 2.0 license via Flickr.]