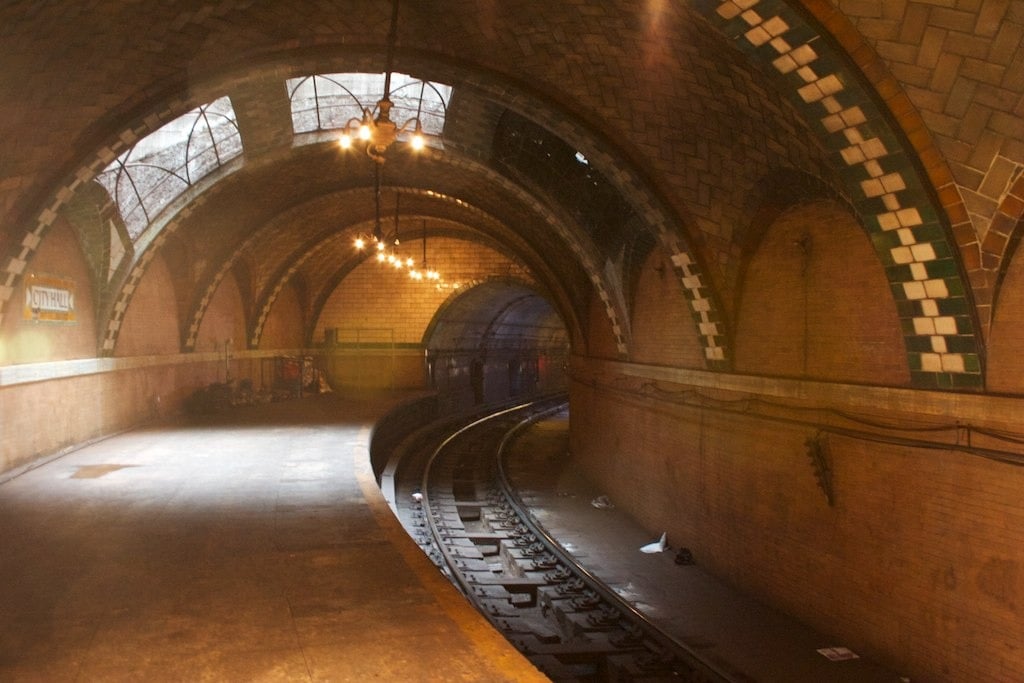 You’d never know it just looking at it, but the New York City subway system is full of secrets. Those tiny ledges jutting out from walls? They’re often indicative of old platforms that have been walled up. Those hatches in the ground on upper level platforms? Sometimes they lead to lower platforms which are no longer used. The bricked-up doorway at one exit of the Times Square station with the word “KNICKERBOCKER” written above it? It’s a disused entrance that once led directly into the no-longer-operational Knickerbocker Hotel. But of all the secrets the abandoned sections of the New York subway hold, the crown jewel is — without a doubt — the old City Hall subway station.

These days, the subway is owned by the City of New York and leased to the Metropolitan Transit Authority. When it first began, though, the subway was actually privately owned and operated — and what’s more, more than one company was at work down there in the tunnels. First opened in 1904, the Interborough Rapid Transit Company, known as IRT, operated what are now the numbered trains; meanwhile, the Brooklyn-Manhattan Transit Corporation, known as BMT, took over what had been the Brooklyn Rapid Transit Company in 1923 and operated what are now the lettered trains. If you ride the subway regularly, you’ll notice that even now, the lettered trains are much wider than the numbered trains are; that’s because, in order to compete with each other, the companies emphasized different strengths: The narrower IRT trains were built for speed, while the wider BMT trains were built for luxury and comfort. Both companies were bought by the city in 1940.

The terminal station of the very first New York subway line — an IRT line now known as the Lexington Avenue line, on which the 4, 5, and 6 trains run — was located directly underneath City Hall… and it was spectacular. Romanesque Revival architecture, vaulted ceilings, beautiful skylights, colored glass tilework, and brass chandeliers made the Rafael Guastavino-designed station a gem of the city. Construction began on it in 1900, with the station finally opening its doors on Oct. 27, 1904; some 1,500 tickets were sold for it that first day.

Interestingly, though, the City Hall Loop wasn’t what one might consider an important station. It served less than 1,000 passengers a day, and it wasn’t open at night; what’s more, its sharp turns and shorter platform proved to be something of a problem when trains began to get longer just a few years after the station’s original opening. Additionally, the Brooklyn Bridge stop, which opened in 1914, was so close by as to make the City Hall station redundant. So, the decision was eventually made to close it: Its last day of service was Dec. 31, 1945.

It sat neglected for decades, the dust gathering around it and its finery drifting to tatters. In the mid-‘90s, the New York Transit Museum began making plans to reopen it as another branch of the museum; however, amid growing safety and security concerns, the plans were abandoned in 1998. One of the entrances was restored in the mid-2000s, though, and these days, the Transit Museum occasionally offers excursions into the station for museum members.

The City Hall station isn’t the only disused piece of the subway you can see if you look in the right places at the right times while riding the rails, by the way. Try glancing out the window of the Q train just before it leaves Brooklyn; you’ll see an optical illusion art installation in the old Myrtle Street station.  Or, take a look out of the windows at the front of the 4, 5, and 6 trains between Brooklyn Bridge and Canal to spot the Worth Street station.

And wherever you go, keep your eyes open. You never know what you might find.