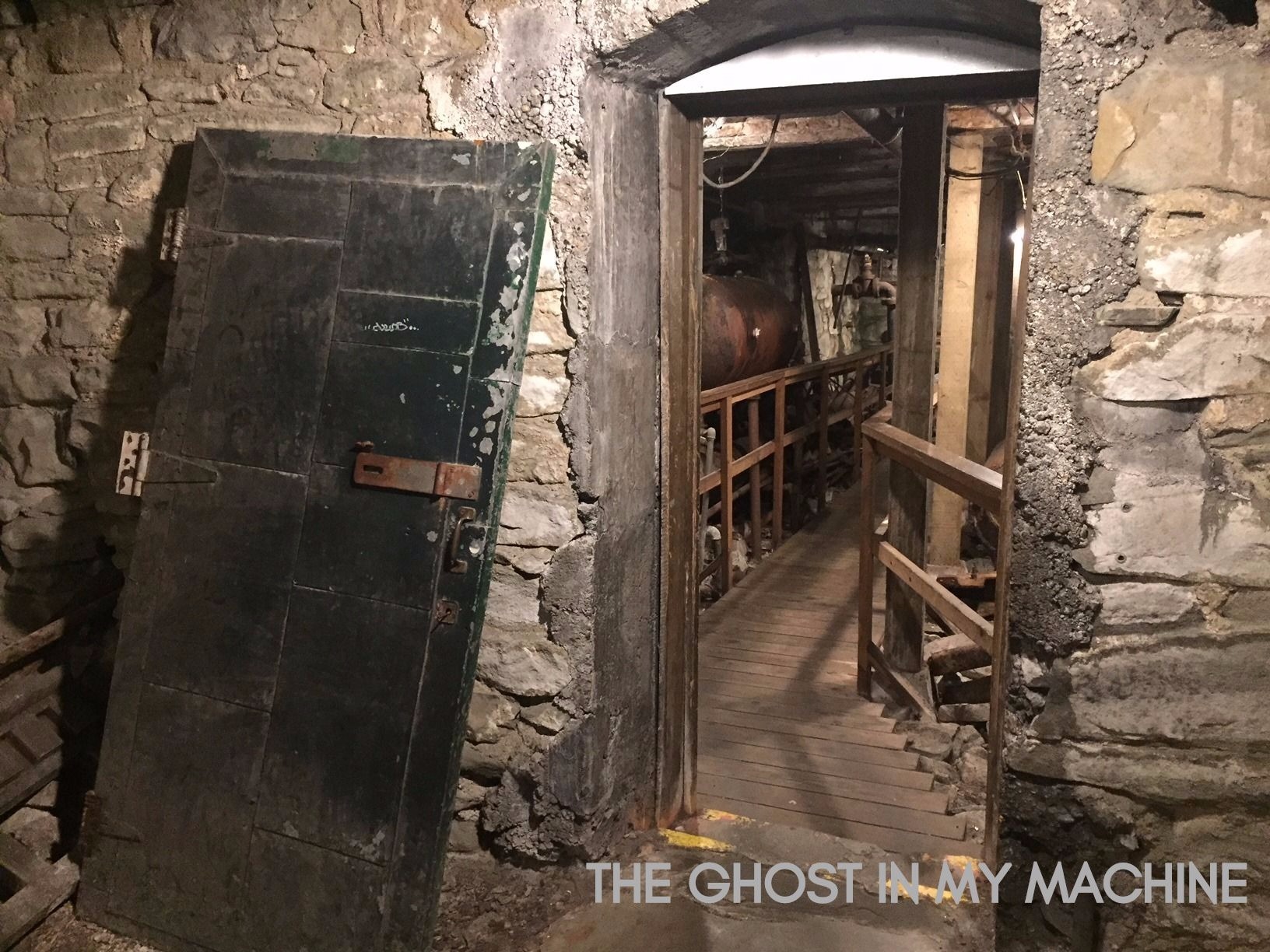 Not far below the surface of Pioneer Square in Seattle, Wash. lies a network of tunnels. You’d never know they’re there from the street (although there are signs if you know what to look for); for years, though — more than a century — they played host to a city beneath the city… and with all that history, it’s no wonder that rumors persist that the Seattle Underground is haunted. Whether or not you’re convinced by the rumors depends on exactly where you stand on the debate about the existence of ghosts, of course; either way, though, the stories are compelling, and the Underground itself is fascinating to explore.

The tunnels aren’t exactly subterranean; in fact, they’re actually at what was once ground level. When white settlers arrived in Seattle (which is usually pinpointed as the “founding” of the city, although — as is the case with pretty much everywhere in the United States — the land was populated by native and indigenous peoples for thousands of years prior to the settlers’ arrival), what is now downtown was built right on the beach. It was a foolhardy move, and as a result, the settlement often flooded (which was doubly problematic, given the nature of sewage management at the time). So, following the Great Seattle Fire, which destroyed more than 30 blocks of the fledgling city on June 6, 1889, two adjustments were made as the city was rebuilt: Buildings would henceforth be required to be made of stone or brick, rather than wood; and the streets would be regraded to two stories above the original level.

The regrading is what created the Underground. Walls were built and the spaces between them filled, with the new streets perching top these constructions; however, since the construction took some time, the walls were placed in such a way that narrow alleyways remained on either side, allowing continued access to businesses and shops located on the original street level while the regrading took place. Ladders were used as a temporary means of reaching this level from the new streets. Eventually, sidewalks were built between the new streets and the buildings, changing the location of the businesses’ entrances and enclosing the alleyways. Et voila: The Seattle Underground, which people continued to use for some time thereafter. Skylights provided light during the day, but you wouldn’t want to be stuck down there at night; without the sun to light the way, it was pitch black. 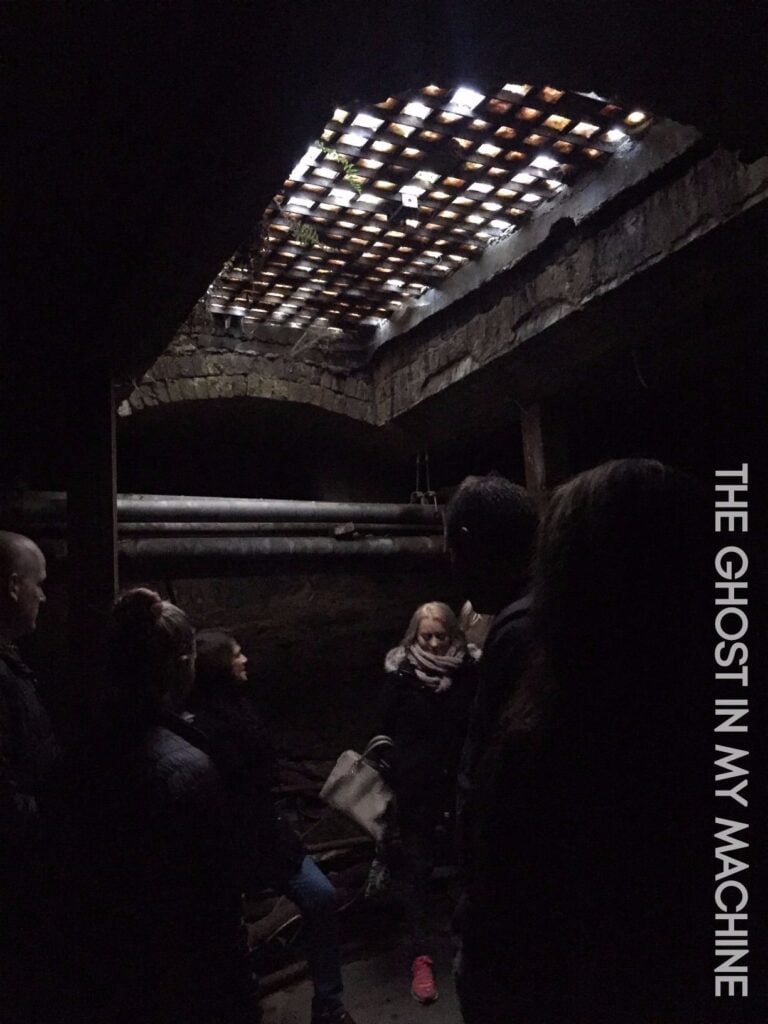 In 1907, however, the Underground was closed. Worries abounded that the rat-infested area was a risk for bubonic plague, and the city’s solution was simply to shut it down. It’s said that after their closure, the tunnels became a hub of illegal activity, housing everything from opium dens to brothels (the euphemism for “sex worker” at the time being “seamstress”) — but a few decades after that, even the crime left the Underground. By the 1940s, they were largely abandoned, shut up tight and moldering away.

It was in the 1960s that the Seattle Underground came back into the public consciousness. Journalist Bill Speidel began researching them, hoping that putting together a small tour of this hitherto forgotten area of Seattle’s history would help raise both awareness and funds to save Pioneer Square. The city’s oldest neighborhood, it was then under threat of being demolished and entirely rebuilt — and if that happened, then a huge part of what made Seattle Seattle would be no more. So Speidel began his Seattle Underground tour, which both saved and revitalized Pioneer Square and began a long-standing tradition of tour companies taking both residents and tourists into the shadowy depths beneath the city.

Only a few sections of the Underground have been made safe and accessible to the public; despite walkways having been built and electric lights having been installed, however, it’s still full of… stuff. Old pipes and other hardware, staircases to nowhere, pieces of furniture, and cobwebs — so many cobwebs — remain down there. They’re not set dressing; tour guides are adamant that whatever is in the Underground beyond the constructions that make it accessible is just there, and has been so for quite some time.

I know because I was there just a few weeks ago. 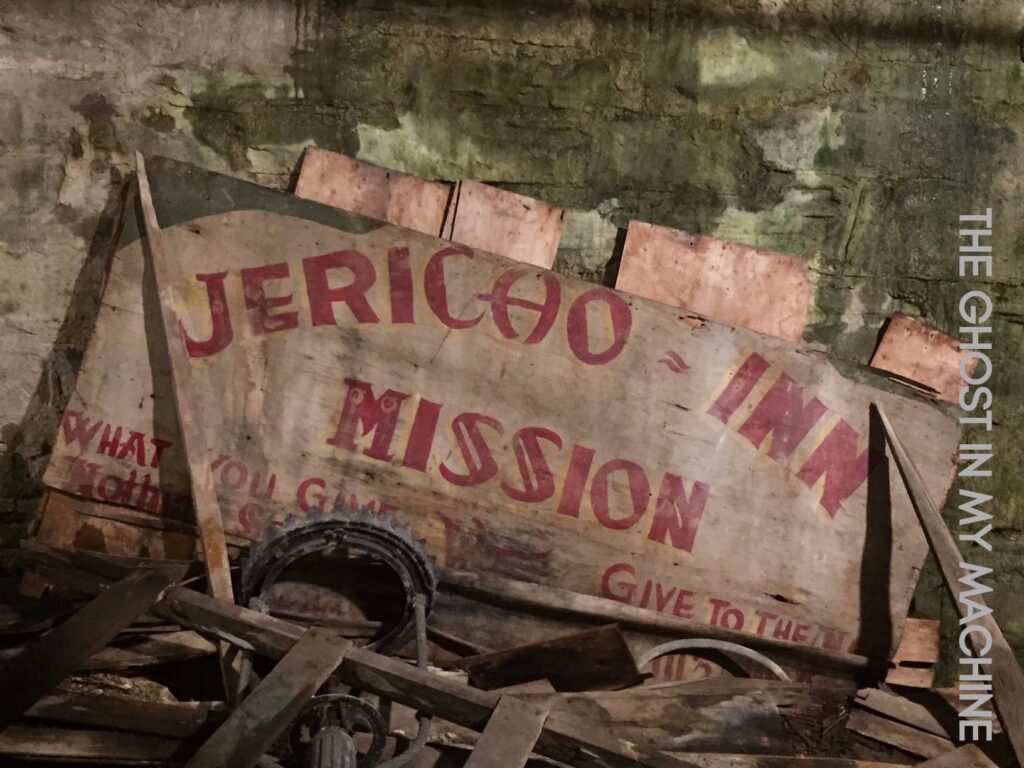 I took Bill Speidel’s Underground Tour, which is still run today, despite Speidel having passed away in 1988. It’s far from the only option (although, again, it’s the original); sections of Spooked In Seattle’s ghost tours veer briefly into the Underground, and the company’s sister tour, Beneath The Streets, focus squarely on the tunnels. But Speidel’s had the advantage of operating on the hour, every hour from 10am to 6pm (9am to 7pm during the warmer months), which fit into my schedule in a way that Spooked In Seattle and Beneath The Streets did not. (Such is the nature of business travel.) I was unfortunately unable to take the paranormal tour, which only runs on select days in the fall; I might come back at some point in the future just for that, though. And besides, even when you’re not officially hunting ghosts… you can still hunt ghosts.

Many of the supernatural stories clinging to the Underground seem to center around this place: 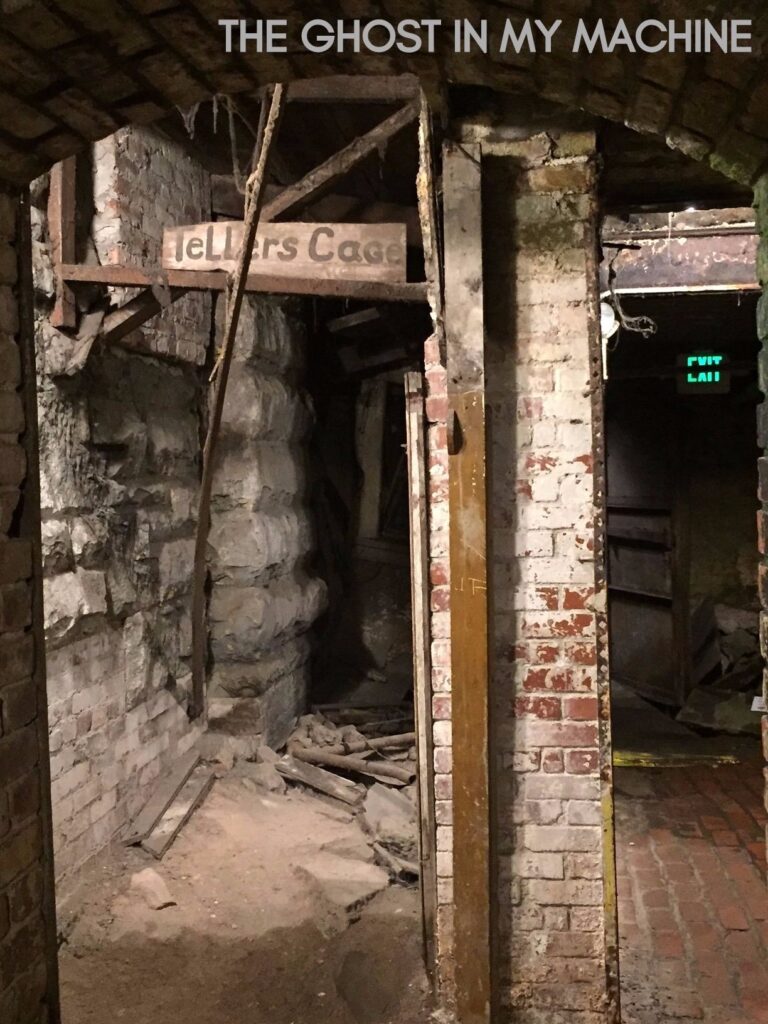 That’s the teller cage of the old bank. Once open 24 hours a day, the bank was meant specifically for prospectors working the Klondike Gold Rush to be able to trade their gold for cash as soon as they arrived in Seattle, no matter what time of day or night it happened to be. Today, it’s said to be one of the most haunted sections of the underground tunnel system.

Who’s stuck down there? Well, there’s Edward. We know he’s called that because he’s told us himself; a number of EVPs taken in the area have documented what seems to be a disembodied voice answering the questions “Who are you?” and “What’s your name?” with the word “Edward,” and occasionally “Eddy.” In the 1980s, one tour guide reportedly spotted an apparition believed to be Edward; he was apparently a tall man wearing suspenders and sporting an impressive handlebar mustache. He’s thought to have been a bank teller who was shot and killed on duty (although it’s worth noting that I haven’t checked whether there’s any record of this event actually having occurred — so take that all with a grain of salt).

I’ve also heard tell of the ghost of a woman who’s said to haunt the area — she’s said to have been murdered behind the vault — although few details seem to be available about this story. Additionally, cold spots have been reported in the area, and photographs taken will sometimes display orbs (if orbs are something you believe in, that is; not everyone — even folks who believe in ghosts — believe orbs are really evidence of the paranormal).

Here’s another location known for its alleged paranormal activity: 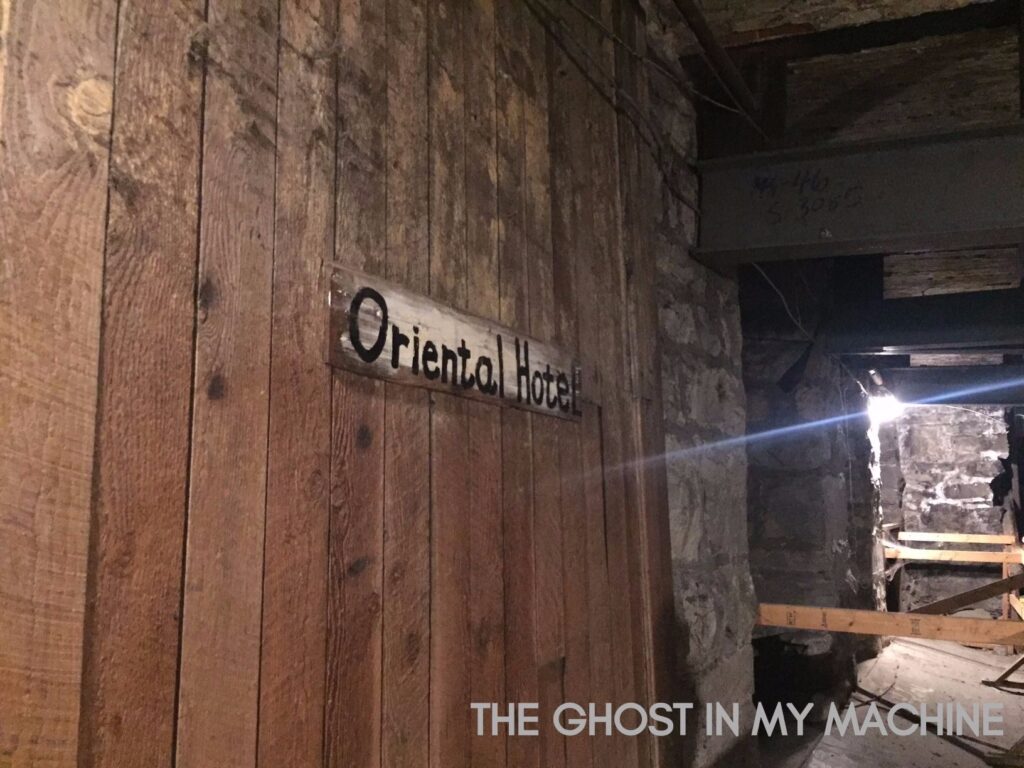 The Oriental Hotel (the name of which probably wouldn’t fly today) was apparently a popular hangout for the “seamstresses” of Seattle — and might still be today. Sometimes the shadowy outlines of women can be seen walking the area, and odd noises paired with telling EVPs have sometimes occurred: A loud bang which turned out to be a trash can being kicked and an EVP seeming to say, “I kicked the can!”, for example.

And there are other tales, too: A woman in white who wanders a particular area of the tunnels; a face seen in a window in the first section of the Underground you’re taken to on Bill Speidel’s tour; a story from a tour guide about a couple who were photobombed by a woman in Victorian-era clothing; and so on and so forth.

Alas, I didn’t experience anything myself while I was in the Underground; nor did my photos turn up anything out of the ordinary, even after some light editing to adjust for brightness. What’s more, I suspect that most of the stories associated with the tunnels are just that: Stories. They’re not quite as outlandish as the ones attached to the Portland Underground, aka the “Shanghai Tunnels” — historians state that there is little to no evidence that the tunnels in Portland, Ore. were actually used for the purposes of “Shanghaiing” — but they’re still exactly what you’d expect from a good campfire tale: Something with enough detail to give you chills, but enough vagueness for some plausible deniability.

But whether there are actually ghosts down in the Seattle Underground or not, one thing there is plenty of is history. And history has a way of haunting us that’s often more effective — and more chilling — than any ghost could be.

Spooked In Seattle: A Haunted Handbook.

[Photos via Lucia Peters/The Ghost In My Machine]