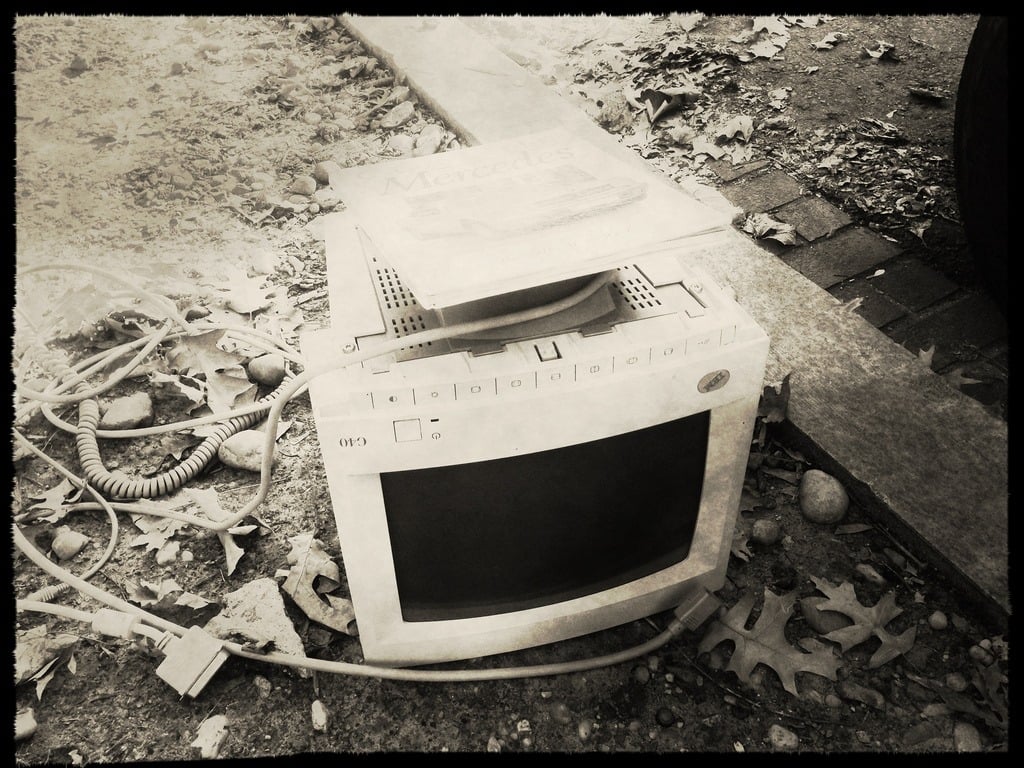 [UPDATE 10/14/17: Alas, the Unfavorable Semicircle YouTube channel appears to have vanished again. The videos below are therefore currently unviewable.]

[In the beginning, it was only four seconds long. Just four seconds — four silent seconds, filled with nothing but a field of murky brown and a small, dark dot. The video was odd, for sure, with an odd title as well — just a string of numbers. The name of the channel on which the video appeared was odd, too, even for YouTube: “Unfavorable Semicircle.” There were seemingly no semicircles here — and even if there were, what on earth would cause one to be classified as “unfavorable?”

The video was uploaded on April 5, 2015; the YouTube account itself had appeared several days prior, on March 30. But this video wasn’t the only clip uploaded that day — an astonishing 1,247 videos appeared on the channel in total.

Pay attention; this fact will be important later on.

Unfavorable Semicircle seemed to fly quietly under the radar for some time; it continued to upload massive amounts of videos, and although it was no doubt a curiosity for many viewers, it hadn’t yet achieved cult status. There was interest, of course, though; across the internet, fascinated viewers gathered together in an effort to solve the puzzle of exactly what Unfavorable Semicircle was — or at the very least, figure out what it meant.

Then, in February of 2016, two things happened: The number of uploads shot up to something like three per minute, and the media began covering the channel and its viewers’ attempts to unravel its mysteries. The uptick in video volume appears to have occurred near the beginning of the month; meanwhile, stories about Unfavorable Semicircle began appearing towards the end of the month on outlets like Atlas Obscura,   BBC Future, and CNET.  On the one hand, drawing public attention to the channel might be seen as a plus — a way to bring in more people, with more sharp minds swelling the ranks of those already devoted to solving the puzzle. But as is the often the case when something previously obscure suddenly enters the public eye, the media coverage may have had a second, unintended effect: On February 25, 2016, the Unfavorable Semicircle YouTube account was suspended.

The reason cited for the suspension and subsequent termination was a Terms of Service violation — the exact phrasing as stated on the account’s terminated page is, “multiple or severe violations of YouTube’s policy against spam, deceptive practices, and misleading content or other Terms of Service violations.” Exactly which term Unfavorable Semicircle violated is unclear, but viewers have speculated that it had something to do with the sheer volume of videos being uploaded in too brief an amount of time. (Remember the number of videos that appeared during the first day of uploads? This is why it matters. Estimates peg the average rate of upload at an average of about one every 10 minutes, which may have been enough to classify it as spam.) The proliferation of attention from major media outlets may be to blame for the suspension — it’s possible that without the additional scrutiny, Unfavorable Semicircle’s activities would have gone unnoticed.

Just a few weeks later, though, dedicated followers discovered a new surprise: Garbled text present on the Google+ page belonging to Unfavorable Semicircle was found and decoded, revealing the location of both a new YouTube account and a Twitter account.

The game, it seemed, was still on — if a game is, in fact, what it was in the first place. And whatever it is, it’s still going on; another related YouTube channel, Stabilitory Newing, was created in August 2016 and discovered in September, while the most recent video posted on the main Unfavorable Semicircle channel as of this writing — UPRIGHT — was uploaded on Jan. 6, 2017. Both a subreddit and a standalone website/wiki devoted to solving the mystery exist, leading the charge among those who seek to get to the bottom of the Unfavorable Semicircle mystery.

So: What is it about Unfavorable Semicircle that draws us in so? The videos themselves, although perhaps unremarkable on their own, are undoubtedly fascinating when taken together as a whole; humans like to find patterns, and groups of items like Unfavorable Semicircle’s videos provide us ample opportunity to indulge that habit.

The videos tend to come in series, although not exclusively so. There’s the BRILL set, the videos of which tend to be a mere five to six seconds in length; the color scheme is usually grey, although occasionally teal, green, or blue, as well. There are roughly 100 of them. There’s the BRINE set, which consists of fewer videos than BRILL, although they are longer: 16 videos, all exactly three minutes and one second long. They are also predominately grey, with a few splashes of color thrown in. There’s FEND, 20 videos, each almost 28 minutes in length, all brightly colored. There is BROTHER and LOCUS, seemingly running parallel, intermingling, a contrast in length: BROTHER videos are six minutes and five seconds; LOCUS videos are a whopping seven hours, 16 minutes, and 46 seconds. BROTHER is largely presented in shades of grey or red; LOCUS is typically green, although occasionally brown, pink, and once purple. Standalone videos appear occasionally, as well. When there’s sound, it’s weird, in the truest sense of the word — the sort of thing that sets your nerves on edge, even though there’s nothing overtly frightening about it. Often there is a voice, believed to be male, distorted, usually pronouncing a number, a letter, or a string of numbers or letters.

Comparisons have been drawn between Unfavorable Semicircle and Webdriver Torso; to me, though, they feel like very different channels. Webdriver Torso was strange, but not exactly creepy — indeed, in many ways, it was almost playful. It therefore wasn’t much of a surprise when it later came out that it was nothing more than an internal test utility for YouTube itself. (Bonus points for Rickrolling us all, though.)

Unfavorable Semicircle, meanwhile, has more in common with the kinds of YouTube channels that specialize in creepy videos knitted together from vintage footage and spooky soundtracks. They’re meant to unsettle you — and there’s seemingly a puzzle buried in there, to boot. It’s the voice that really convinced viewers that the videos were something more there than a test channel — that there’s something to decode. And signs right now seem to confirm that there is, in fact, something to decode.

There are, of course, a lot of theories about what Unfavorable Semicircle really is, some of which are more convincing than others. The channel being the work of aliens, for example, lies among the more unlikely of theories; also unlikely, although perhaps on the surface more believable, are the ideas that Unfavorable Semicircle is a script going haywire or a test channel. According to the Unfavorable Semicircle website, however, both of these theories have been debunked by specific behaviors exhibited by the channel: The first by the fact that it has created new accounts and switched platforms (something a script can’t do), and the second by both the switching of platforms (the existence of the Twitter account demonstrates it to be a multi-platform thing not specific to YouTube — ergo, it’s not a YouTube test channel) and the fact that the original channel was banned for TOS violations (it doesn’t make much sense for a test channel to be banned by the platform it’s meant to be testing).

A few other theories have been determined to be possible, but unlikely: That it’s a viral ad campaign, for example (“unlikely due to the length of the project and seeming lack of purpose,” according to the Unfavorable Semicircle website), or a kind of numbers station (the “breadcrumbs” leading to other accounts throw a wrench in this theory), or that it’s a masterful piece of trolling (again, the length of the project and lack of purpose argue against this idea). But a couple that might be likely include Unfavorable Semicircle being an art project, a recruitment tool similar to Cicada 3301, or an alternate reality game —  which the “Start Here” post on the Unfavorable Semicircle subreddit notes is the current prevailing theory.

Personally, I’m inclined to go along with the ARG theory myself; the “breadcrumbs” aspect of the whole thing that’s also cited as evidence for it not being a numbers station is one of the hallmarks of a good ARG. Think about Ben DROWNED, or the Wyoming Incident (which, by the way, appears to have started up again — Night Mind has a terrific video walking us through the new developments, so check it out if you’re interested), or any of the other early internet ARGs that helped pioneer the literal rules of the game. They were all made up of proverbial breadcrumbs, leading players to each new piece of the story as the game went on.

This quality also highlights one of the biggest differences between Unfavorable Semicircle and these older online ARGs: Unlike the classics, Unfavorable Semicircle doesn’t have a clear narrative driving it. However, I’d argue that that’s kind of the point. Early internet ARGs needed stories to justify their existence with a concrete reason for players to be digging through all these seemingly random bits and pieces. Now that online ARGs are more established, though, the boundaries of what exactly an ARG is can be pushed a little further. If this is in fact the case for Unfavorable Semicircle, it’s a prime example of how internet-based ARGs as a genre are evolving over time.

(And besides, just because we haven’t identified a story yet doesn’t mean there isn’t one. Maybe we just have to dig deeper.)

But right now, the answer to pretty much every question you might ask about Unfavorable Semicircle — what it is, who’s making it, what the name of the project itself even means — is, “We don’t know.” We don’t know what it is; we don’t know who or what might be behind it (although we’re pretty sure it’s a person, at least); and we have no idea why it was given the name it has. It’s true that we might be missing the forest for the trees; after all, analyzing single videos is only helpful when they’re placed in context. But as we chip away at those smaller pieces of analyses, a bigger picture might come into focus. Think of it like a jigsaw puzzle: You have to identify the pieces before you start putting the whole thing together. And then smaller pieces will be put together to form larger pieces, and then those larger pieces will connect, and so on and so forth.

The box of that puzzle may look to be bottomless right now — but we’ll get there eventually.

The Unsettling Mystery of the Creepiest Channel on YouTube.