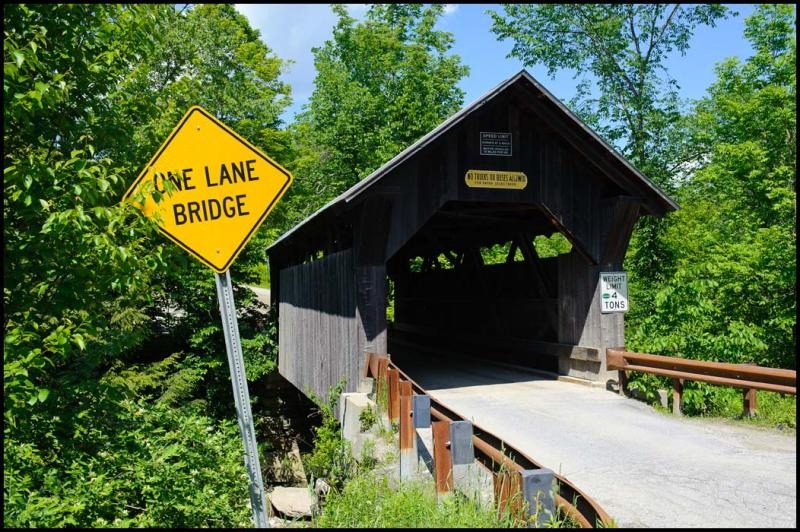 New England is full of covered bridges. Though they’re mostly known for their picturesque aesthetics these days, they did once serve a purpose; weather can be hell on uncovered wooden bridges, so for areas that experience the dramatic highs and lows of all four seasons, covers were absolutely essential in the eras before most construction was completed with metal and concrete. In Stowe, Vermont, however, there’s one covered bridge that is more than its image, and more than the sum of its parts. It’s called Emily’s Bridge, and it bears that name for a very specific reason.

49 feet long, the bridge in Stowe is of the type known as a Howe Truss bridge — an uncommon kind of truss patented in 1840 by William Howe. This particular Howe Truss, which was built in 1844 and is the only one of its kind in the entire state of Vermont, carries Covered Bridge Road over Stowe Hollow’s Gold Brook. This, in turn, has given it its official name: Gold Brook Covered Bridge.

Most, though, refer to it by its other name.

Exactly who Emily was and why the bridge is named after her varies depending on who you ask. In one version of the story, she is a young bride on the way to her wedding when something spooks her horse as she crosses the bridge; the horse throws her, fatally injuring her. In another, Emily’s fiancé jilts her, either by not appearing at an appointed time for an elopement or by leaving her at the altar; she subsequently hangs herself from the bridge’s rafters in grief. In a third, Emily — this time expressly described as not a beauty — falls in love with a local man who appreciates the attention, but has no intention of marrying her. When their affair leads to a pregnancy, however, Emily’s father insists that the man marry his daughter; rather than do so, he kills himself on the bridge. After giving birth to twins, Emily follows suit. And in a fourth — the most gruesome — she is murdered by the mother of her fiancé. Why? That, I do not know. I assume it was the result of a parent being unwilling to accept that the fact that her grown child had become an adult in his own right with a life of his own. 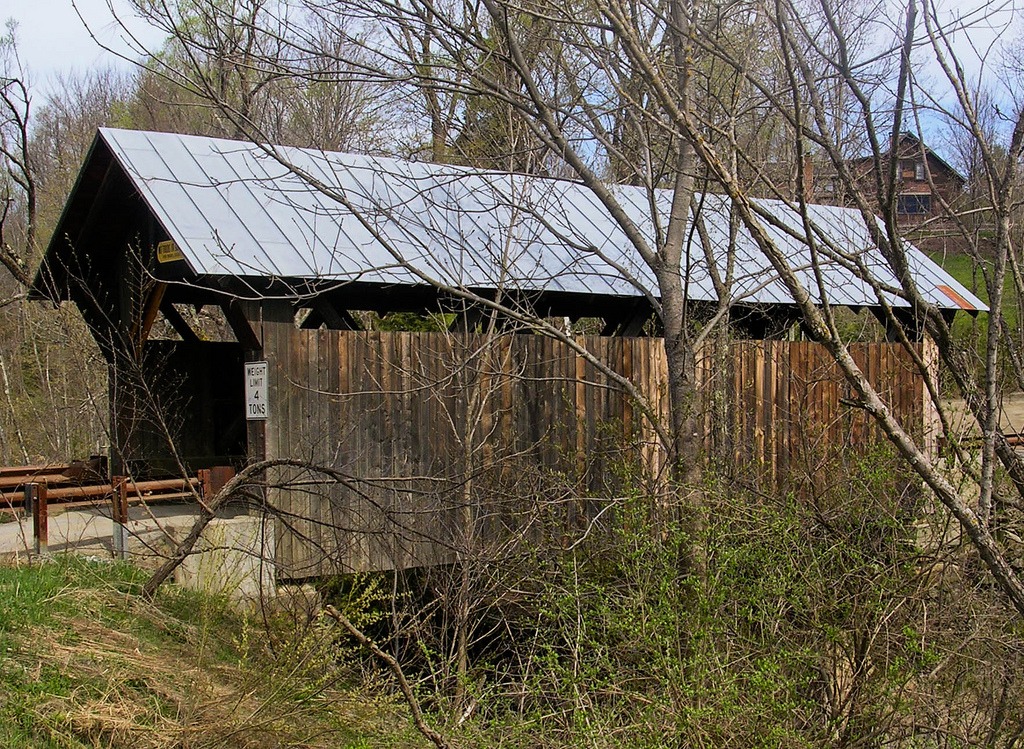 All of these stories have two things in common. The first are the themes: Love and marriage factor prominently, giving the stories their raison d’etre. The second, however, is this: There is no historical evidence that any of the stories actually occurred. As the Stowe Reporter stated in 2013, the historical society has no record of a woman named Emily dying on or near the bridge. At all.

Both of these points are unsurprising; indeed, for those well-versed in folklore (or even those just pseudo-versed in it), they’re to be expected. The themes of the many versions of Emily’s story are common in urban legends, which typically deal with our anxieties surrounding the unknowableness of our everyday lives: Love, loss, family, the fragility of both the human spirit and the human body. And as for the persistence of legends, despite the fact that, as far as we know, Emily never existed? Personally, I often feel that spooky places and the stories attached to them are something of a chicken-or-the-egg question; do we come up with the stories to help us process the spookiness of the place, or do we decide a place is spooky based on what we’ve heard other people say about it? Either way, what’s clear is that the meaning hung from certain places isn’t necessarily innately there. It exists because we ascribe it to them. 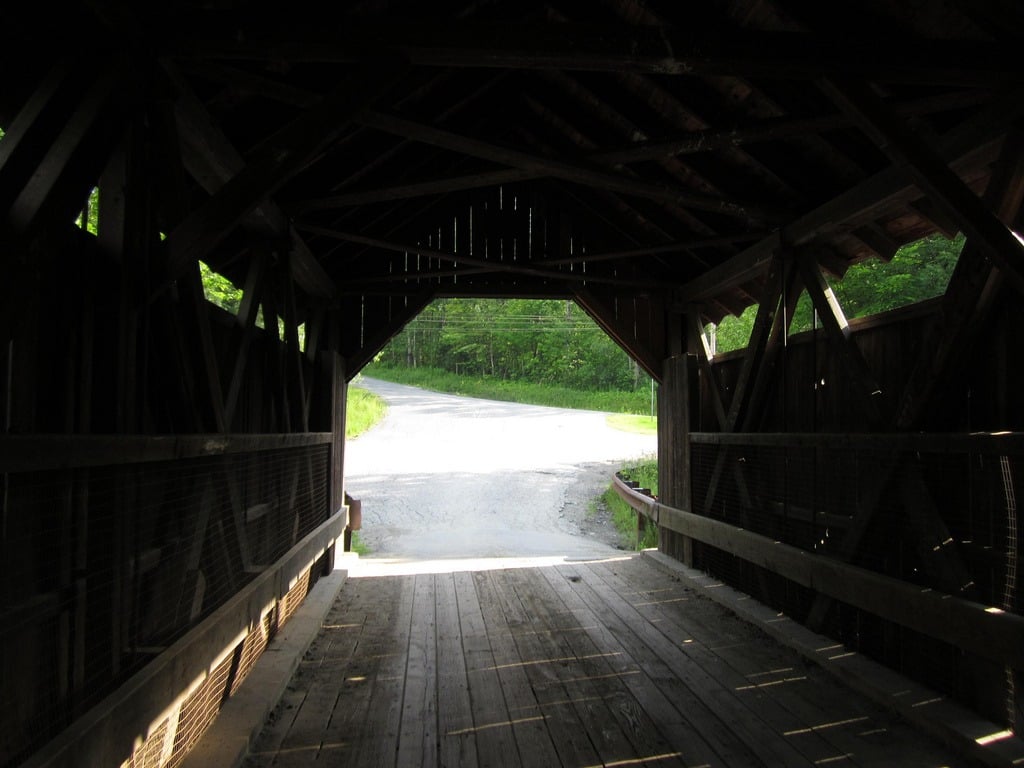 Exactly how the various stories began remains something of a mystery, although as both Obscure Vermont and the Stowe Reporter note, Stowe resident Nancy Stead claims to have invented Emily in the ‘70s as a spooky story meant to frighten kids. “The girls were buzzing about witchcraft and covens (gatherings of witches), and we said we should probably tell them about this bridge, and this girl Emily who died there,” Stead told the Stow Reporter. “Each of us would add our own line to the story, and boom, it just took off and went crazy. But it was just made up.”

Interestingly, though, Obscure Vermont did some more digging and found a few more tidbits worth noting — which, when taken together, begin to paint a clearer picture of the stories’ genesis. The first is that Gold Brook Covered Bridge began gaining a reputation as “the haunted bridge” around 1948. Emily wasn’t in the picture then; indeed, mention of Emily can’t be found in local folklore until after around 1970, lining up with Nancy Stead’s claims. The second is that something tragic did apparently occur on Gold Brook Bridge around 1920 — a little girl reportedly fell off the bridge and struck her head on the rocks below, dying of the trauma. There’s apparently an elderly woman who lives near the bridge who remembers when the incident happened; according to Obscure Vermont, she was about 10 years old at the time. This may have been where the original “haunted bridge” reputation came from.

The third tidbit, though, is perhaps the most intriguing: It’s possible that Gold Brook Bridge actually isn’t Emily’s Bridge. There was once another covered bridge in the area on which records do indicate a death occurred, though unfortunately there are no details about it to be found. This bridge burned down in 1932 and was replaced by a much less picturesque concrete crossing — but it’s not outside the realm of possibility that the legend began with this bridge, shifting over to the other only after the 1932 fire. 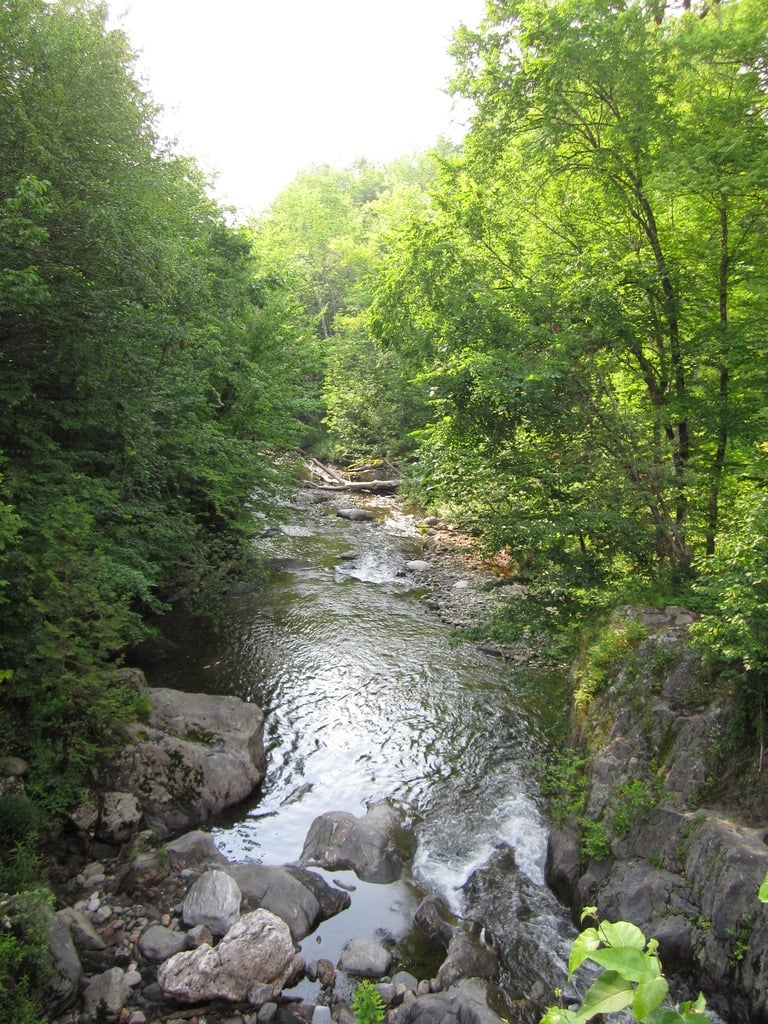 Still, though — despite the fact that most of the stories ascribed to Gold Brook Covered Bridge are demonstrably fictional, reports of unsettling occurrences on it continue to roll in, typically “happening” between the hours of midnight and 3:30am. Some say that they’ve heard footsteps, a woman crying, the sound of ropes creaking. Others say that they’ve actually experienced an unknown force banging on their car as they drove across the bridge. And still others report having witnessed a full apparition of a woman on the bridge.

I’ll be honest: I can’t help but wonder if maybe these experiences are the result of our own expectations getting the best of us. If we think something spooky happened somewhere, maybe we expect that something spooky will happen to us while we’re there — even if the original legend is nothing but a fiction. And if that’s what we expect, then perhaps things which might otherwise be unremarkable — the whistling of the wind, the rattling of a vehicle crossing a wooden structure — can become different, darker, harder for us to explain.

But maybe we need them to remain unexplainable. Maybe we need Emily and her mysteries. Maybe we — like another fictional character I could name — just want to believe.

The power of suggestion is a potent thing, indeed.

The Exorcism of Emily’s Bridge.