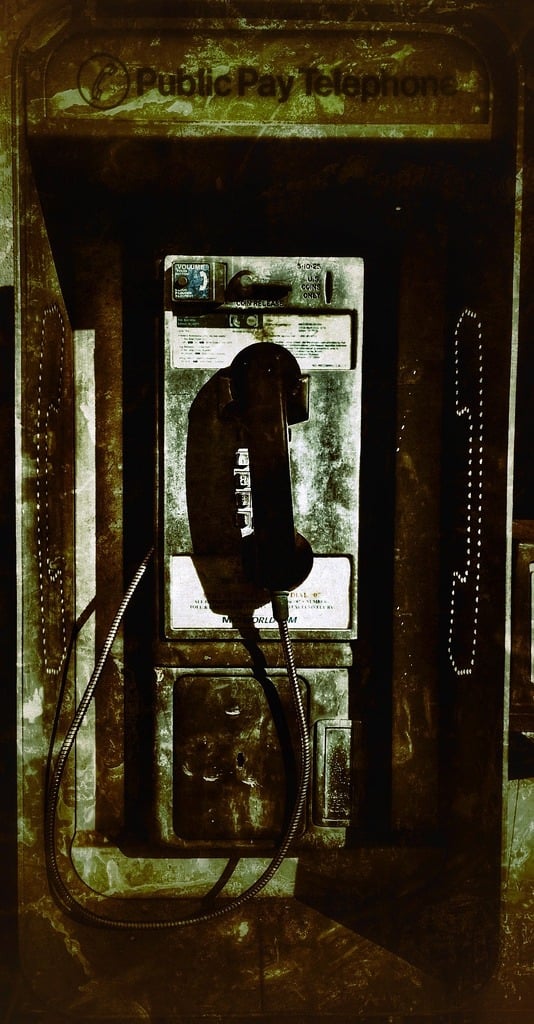 Previously: The Girl from the Gap.

Period/location of origin: Unknown, although the majority of accounts suggest subject’s origins date back to the 1970s in the UK.

Appearance: Subject appears to be a particular string of numbers which, when dialed by target from any public telephone box, result in target hearing an unusual and disturbing message. The precise string of numbers has not been determined; accounts suggest that it consists primarily of the digits 0, 1, 2, and/or 3, but as each account suggests a slightly different arrangement of said digits, no definitive answer has been discovered. It is possible that all accounts may be correct, regardless as to how much they may differ; subject may change from time to time, although whether it is changed by a third party or by subject itself remains to be seen.

Modus operandi: The means by which subject selects target has not been identified; however, upon selection, target will feel compelled to seek out a public phone box, pick up the handset, and dial subject. Upon connection, target will hear a woman’s voice state the words, “Help me, help me, Susie’s dying.” Should target continue listening, target will hear these words repeat ad nauseum.

Containment: Unknown, although the growing prevalence of cellular telephones and the subsequent diminishment of public phone boxes has somewhat lessened subject’s force. Should a period arrive in which public phone boxes no longer exist, it is likely that subject will be effectively terminated.

Additional notes: Some accounts by previous targets note slight variations in subject’s modus operandi: Money may or may not be required before dialing; subject’s message may be clear or distorted; subject’s words may occasionally be, “Help me, help me, Susie’s drowning,” as opposed to “Susie’s dying”; and so on. However, accounts converge on the tone of the voice heard on the other end: Targets universally describe it as “curiously monotone.”

Whether or not the voice belongs to subject or is merely the result of subject has not been determined.

Similarly, who or what “Susie” may be remains unknown, as does what may have happened to her/it. It is possible that “Susie” remains in a perpetual state of both dying and not dying, not unlike a certain cat featured in a notable thought experiment; calling subject may trigger the action of dying, although whether or not the dying continues once target has disconnected has not been determined. The researchers would like to note that, should this be the case, subject’s motivations may become clear: The subject appears to be torturing “Susie,” employing all targets as torturers-by-proxy.

It has been suggested by some that subject’s message is a test signal. Precisely why a test signal would utilize such a disturbing message has not been adequately explained.

Whatever might be happening to “Susie” whenever the number is called, she almost certainly doesn’t deserve it.

Help Me, Help Me, Susie’s Dying.