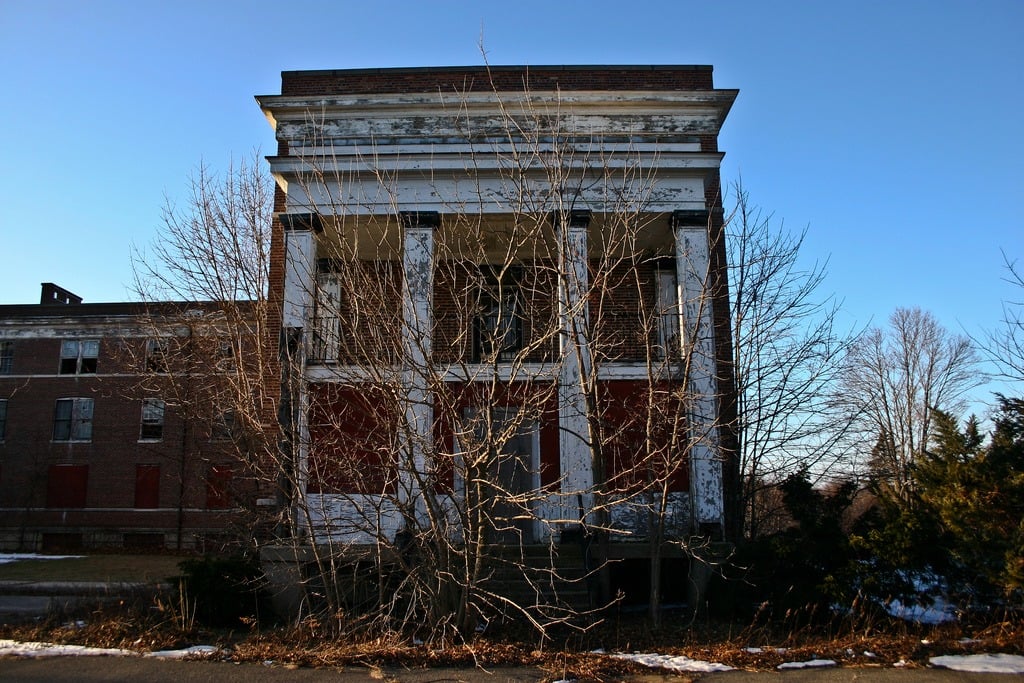 I realize that perhaps a disproportionate number of the locations I’ve been dealing with in “Abandoned” are former hospitals or psychiatric centers. There’s just something about them that gets me like nothing else, although what exactly that “something” is, I’ve never been able to articulate. Maybe it’s because of the sheer number of memories that must imbue them — all those people, for all those years… I don’t know. But whatever it is, the Kings Park Psychiatric Center on Long Island in New York has it.

Opened in 1885, Kings Park Psychiatric Center — then known as the Kings Park Lunatic Asylum — was one of four major psychiatric hospitals opened on Long Island during the late 19th century and the first half of the 20th century; the others included Central Islip Psychiatric Center (opened in 1889), Pilgrim Psychiatric Center (opened in 1931), and Edgewood State Hospital (opened sometime during the 1940s). All four of them were facilities of the “farm colony” variety, with patients raising crops and taking care of livestock in an effort to make the facilities self-sufficient communities. At the time of its opening, Kings Park housed a mere 55 patients; indeed, its purpose was to play against the overcrowding issues that plagued so many hospitals at the time. Just 10 years later, however, it too began suffering from overcrowding, resulting in the state of New York taking over the running of the facility. The change in management also brought a change in name: The place became known as the Kings Park State Hospital.

What happened next is a familiar story: The hospital grew, and grew, and grew, until the campus consisted of over 150 buildings. Many were patient wards, of course, including the facility’s most well-known building, Building 93; many more were medical and surgery buildings; and others included a power plant, a patient-run café, a recreation center that included a bowling alley and a swimming pool, and more. The population, too, swelled; by 1900, it played host to 2,697 patients, and by 1954, it hits its peak at a whopping 9,303 — a long way from its original population of 55. The huge collection of buildings and the number of patients and staff they supported were frequently referred to not as Kings Park State Hospital, but as Kings Park Psychiatric Center.

Over time, the focus of Kings Park’s treatment changed, as well. Rather than the gentle rest and relaxation thought to be inspired by farming activities, patients were instead subjected to two of the most controversial procedures in psychiatric history: Electro-shock therapy and the pre-frontal lobotomy. The use of these procedures waned after the development of antipsychotic medication — most notably chlorpromazine, known as Thorazine, which became widespread as a method of treatment in the U.S. during the mid-1950s — but the development of the drugs also led to another change: Declining patient populations. Thorazine made it possible for cases previously thought to be “hopeless” to live on their own — which lessened the need for huge facilities like Kings Park. This, combined with the movement towards deinstitutionalization prevalent in the 1970s, ‘80s, and ‘90s, resulted in a hospital which, once fearsomely overcrowded, was now virtually empty.

During these decades, Kings Park’s many buildings were systematically reduced in usage or shut down all together — including Building 93, which originally consisted of 13 stories. By the mid-‘90s, only a third of it was still in use. The New York State Office of Mental Health made the decision to close both Kings Park and Central Islip in the early ‘90s, with the plan being either to transfer these facilities’ patients to Pilgrim Psychiatric Center or to discharge them all together. In 1996, Kings Park Psychiatric Center closed its doors,

There was one problem, of course: Although many patients no longer required facilities like Kings Park, the smaller community centers which were meant to help provide treatment for those living out in the world were never built in the numbers required. As a result, the patients released during the deinstitutionalization phase often did not receive the treatment they needed, leading to the rise in numbers of homeless individuals suffering from mental illness. This problem persists today; according to the Substance Abuse and Mental Health Services Administration, “Of the approximately 610,000 people who were homeless on a single night in January 2013, one in five had a serious mental illness, and slightly more than one in five had a chronic substance abuse problem.” Those are big numbers, and ones we should be doing much more to try to reduce.

The decaying remains of Kings Park Psychiatric Center still stand. Some of the buildings have been demolished, but many remain — and though it’s illegal to go inside any of them (as it frequently is when it comes to abandoned buildings), it is possible to drive, walk, or bike through the site. Plans to sell the property have been unsuccessful, so for now, Kings Park lingers, waiting, perhaps — but for what, no one knows.