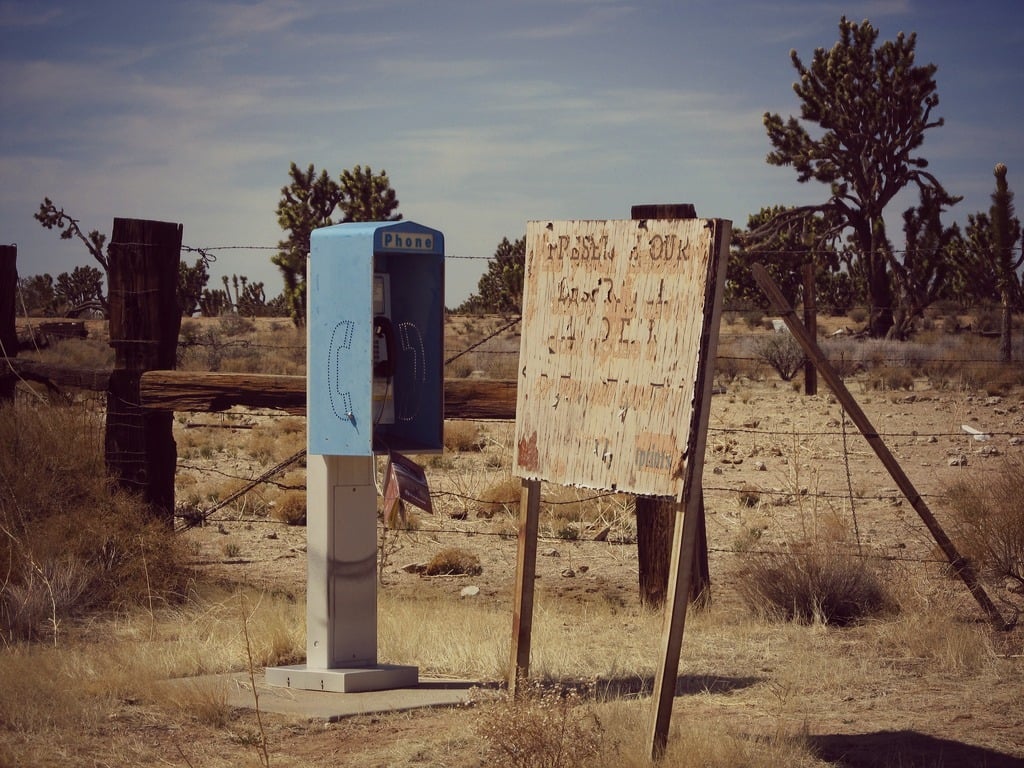 Previously: The Well to Hell.

Appearance: Subject appears to be a Pacific Bell phone booth located at the intersection of two dirt roads in the middle of nowhere. It lies 75 miles southwest of Las Vegas, Nevada, eight miles from the nearest paved road, fifteen miles from the nearest numbered highway, and a substantial distance from any buildings. The phone number originally connected to subject was (714)733-9969, although subject’s area code has changed several times since its initial appearance.

Modus operandi: Subject may be either dialed or answered, although outgoing calls may no longer be placed due to the deactivation of subject’s coin box. An unknown being may instruct individuals to travel to the desert and answer the phone; however, as only one individual has ever reported receiving such a command, insufficient information exists for such a phenomenon.

Be warned that, regardless as to which end of the line one may be on, one never knows to whom one might actually be speaking.

It is unknown who the repeated caller identifying himself “Sgt. Zeno from the Pentagon” actually is — or whether he ever existed in the first place.

Containment: Successful. Subject was removed and its number retired in 2000.

Additional notes: Subject initially appeared in 1948 as a hand-cranked magneto phone. Part of a network of “policy stations,” subject was government-mandated to provide communication to isolated areas of its state of origin. Subject later became a rotary payphone in the 1960s before becoming a touch-tone payphone in the 1970s.

Its discovery by a Los Angeles man in 1997 lead to subject’s widespread fame. Upon identifying a telephone icon on a map of the Mojave Desert, he set out on a quest to find it; he then documented his journey in a letter to an underground magazine, including subject’s number in the text. Since then, websites devoted to subject have chronicled the adventures of all those who have either sought subject out or dialed subject from afar.

Although subject is no longer physically standing, subject has entered the cultural zeitgeist as an unusual and intriguing oddity.

As of 2013, subject’s number has been resurrected for the purposes of enlightenment and entertainment. The number in question no longer connects with subject’s physical form — although the idea of subject may be more important than the reality of subject itself.

Recommendation:  Go ahead and dial.

You know you want to.

The Legendary Mojave Phone Booth Is Back.