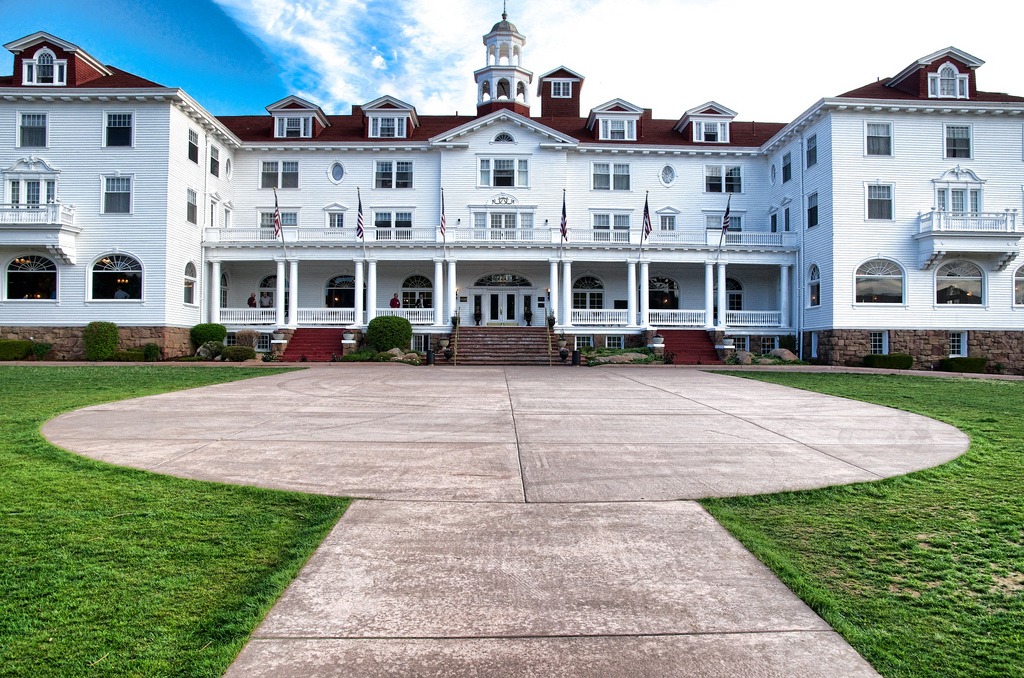 If you’re a Stephen King fan, you probably already know that the Stanley Hotel in Estes Park, Colorado served as the inspiration for the Overlook Hotel in his 1977 novel, The Shining. The idea came to King in 1973; staying the night in room 217 of an almost-empty hotel right before it closes for an extended period of time is bound to get the imagination of a horror writer going. But although the fictional Delbert Grady and his unfortunate wife and children have never been seen walking the halls of the Stanley Hotel, that doesn’t mean it doesn’t have a few stories of its own.

Freelan Oscar Stanley, co-inventor of the Stanley Steamer automobile, first arrived in Estes Park with his wife, Flora, in 1903. The reason for the move was health-related; Stanley suffered from tuberculosis, so at the suggestion of his doctor, he and Flora took up residence in a cabin in the area for the summer. Struck both by the beauty of the place and by Stanley’s rapid improvement, the couple decided to stay in Estes Park, and after purchasing land and a hunting lodge from the British Earl of Dunraven and Mount-Earl, began construction in 1907 on what would soon become the Stanley Hotel.

Built in the Georgian architectural style and equipped with such newfangled conveniences as indoor plumbing, electricity, and telephones, the resort was a sight to behold; indeed, it changed the face of tourism in Estes Park when it opened in 1909. Furthermore, by the time of his death in 1940, Stanley would completely revitalize the entire town: In addition to the hotel and the cabin a half mile west of it in which he and Flora lived, Stanley developed a sewer, power, and water company, established Estes Park’s first bank, and promoted the establishment of Rocky Mountain National Park. Now in its 105th year of operation, business is booming and the hotel remains as grand as ever.

It’s unknown exactly when the strange occurrences began happening at the Stanley Hotel, but as far as we know, they’ve been going on almost as long as the resort has been in existence. Happily, unlike its fictional counterpart, the Overlook, whatever haunts the Stanley Hotel appears largely benign in nature. Nearly all of the rooms have reported items moving on their own and lights turning on and off; the sound of children laughing may sometimes be heard drifting down the hallways; and on occasion guests may find themselves the recipient of “extra” services, such as their things being unpacked for them or a nightly tuck-in. Sometimes small bodies leave impressions on otherwise unoccupied beds, and a small child has occasionally been seen on the second floor searching for his nanny.

Not all of the presences are the imprints of guests, however; the Stanleys themselves put in appearance from time to time, with F.O. favoring the Billiard Room and Flora the piano in the ballroom. It’s even believed that one of the hotel’s earliest chief housekeepers, Elizabeth Wilson, offers special care for guests staying in a particular room: During a storm the evening of June 25, 1911, she was caught in an explosion in room 217 while lighting the acetylene lanterns that served as the backup system for the hotel’s electricity. She survived, although she broke both ankles in the accident. After her death in the 1950s, she seemed to have made her way back to the hotel, just to make sure no one else—including Stephen King—suffers anything untoward in room 217.

One room you may want to steer clear of, however, is room 407. That’s where Lord Dunraven, the previous owner of the land on which the Stanley Hotel was built, hangs out. He has a habit of playing with the light switches and making noise in the nearby elevator shaft when the lift isn’t in use. A strong aroma of cherry tobacco rises up in the room without warning; furthermore, when the room is vacant, his face has been seen looking out the window from the ground. His presence is more mischievous than dangerous, but still—there’s only so much trust one can put in a presence that may be the ghost of someone who was run out of town for swindling the local population.

As far as reportedly haunted locations go, the Stanley Hotel is one of the milder ones; if you like the idea of dabbling in ghost hunting, but remain wary of opening yourself up to something that may prove difficult to get rid of, this picturesque spot would be an excellent location to dip your toe in. Just try not to watch Channel 42 before you go to sleep; Stanley Kubrick’s film adaptation of The Shining plays on it on repeat in all the rooms. It’s best not to tempt fate—even in your dreams.