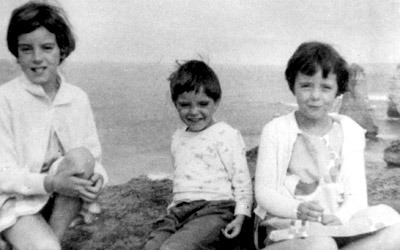 Jim and Nancy Beaumont thought nothing of it when their three children, Jane, Arnna, and Grant — the Beaumont children — took the bus from their home in Somerton Park, Australia to the beach on January 26, 1966. It was Australia Day, so of course the children would want to celebrate; and with the beachside resort Glenelg so close to their home, where better to spend the hot summer holiday splashing around in the surf? Jane, the eldest at nine years old, took charge of the younger two, herding them towards the bus for the five-minute ride to the beach. They left home at 10 o’clock in the morning, with instructions to return at noon.

But by three o’clock, they hadn’t made it home.

The Beaumont children would never make it home again.

With the children at the beach and her husband, a linen goods salesman, off to Snowtown to meet with potential clients, Nancy Beaumont had spent the morning visiting a friend. She arrived home before the noon bus Jane, Arnna, and Grant were meant to be did; but when it pulled up, the children failed to depart. Unconcerned, Mrs. Beaumont assumed they had either decided to walk home—something they’d done before—or had missed the bus and would return on the 2pm one instead. But they weren’t waiting for her at home; neither did they return on the later bus. Slightly worried at this point, Nancy continued to wait at home. But the three o’clock bus, too, came and went without the reappearance of the children, throwing their mother into a frenzy of worry. After Jim arrived home, the two frantic parents headed to the beach to search for their children themselves—but after failing to find them, they finally reported Jane, Arnna, and Grant missing to the police at 7:30 at night. Jim Beaumont continued to search through the night; his search turned up no sign of his children, though, and they were declared officially missing the morning of January 27, 1966.

Despite the investigation that would follow, the Beaumont children were never seen again.

Here’s what we know about their movements that day:

At 10:10am, they caught the bus from the corner of Diagonal Road and Harding Street, less than 100 meters from their home. They were identified both by the bus driver and by a passenger, a woman who recalled both the colors of the clothing the children were wearing and the fact that Jane was carrying a copy of Little Women with her. The children departed the bus at the Moseley Street stop at 10:15am.

The next 45 minutes remain unknown. Tom Patterson, a local postman who knew the children fairly well, recalled seeing them walking along Jetty Road towards the beach; however, he later believed his sighting occurred in the afternoon, rather than the morning. In any event, a 74-year-old woman seated on a bench in front of the Holdfast Sailing Club saw Jane, Arnna, and Grant playing under a sprinkler on the lawn of the Colley Reserve at 11am; a friend of Jane’s from school also spotted them at this time, but did not stop to speak to them. The woman noticed a blond man in blue swimming trunks lying face down on the grass, apparently watching the children. About 15 minutes later, she saw the man in the blue trunks playing with the children.

At 11:45am, the children purchased some pasties and a pie from Wenzel’s cake shop using a £1 note. Given that Mrs. Beaumont insisted to the police later on that she had given Jane only eight shillings and sixpence in coins, exactly where the £1 note came from is unclear; police believe it was given to them by someone else.

At 12pm—the time the children were due to catch the bus home—a woman, an elderly married couple, and the couple’s 10-year-old granddaughter, who were sitting on a bench, were approached by a man with three children. The man claimed he was missing some money and asked whether they had seen anyone touching his clothing; they told him they hadn’t, at which point he returned to the three children, He helped them dress — odd, thought the elderly woman, especially given that one of the children seemed old enough to dress herself. The younger woman’s description of the man matched the one given earlier by the woman who saw the children playing under the sprinkler; additionally, she was fairly certain that two of the children were Jane and Grant, as well as absolutely positive the third one was Arnna.

At 12:15pm, after dressing the children, the man picked up a pair of trousers and a towel and walked away with his young companions. According to the younger woman on the bench, they disappeared behind the Glenelg Hotel; the elderly woman, meanwhile, believed they went to the Colley Reserve changing rooms. This short exchange marks the last confirmed sighting of the Beaumont children.

It’s possible that there were two additional sightings of the children later in the day, although police were unable to corroborate them. At 1:45pm, a man visiting from Broken Hill saw a man matching the description the one seen by the earlier spectators leaving the beach with three children — the one difference being that he believed the man had light brown hair instead of blond. The other possible afternoon sighting would be the postman’s, although Patterson had noted in his account that the children were alone. Patterson was also uncertain about whether he spotted the children at the beginning of his round, at 1:45pm, or at the end of it, at 2:55pm. Given the shakiness on which both of these sightings stand, however, police determined that they could not be relied upon.

The search for the children was extensive, eventually becoming one of the biggest ever launched in Australia. The fact that their towels, Jane’s book, and assorted other belongings were not found indicated that the children had not been swept out to sea; this, combined with the sightings of the tall blond man, suggested that they had been abducted. Every seaside suburb was searched, with everyone from neighbors, to former coworkers of Jim Beaumont, to complete strangers asking what they could do to help. Jim even made an appeal on national television for their return on January 31, five days after they had last been seen; in response, hundreds of viewers called in, believing they had spotted the children. But although every lead was followed up, no further information was found.

The dead ends are numerous. In addition to the police investigation, a psychic investigation was launched shortly after the children’s disappearance; however, it, too, failed to turn up anything. Gerard Croiset, a parapsychologist from the Netherlands, identified a site in a warehouse near the children’s homes in which he believed their bodies had been buried—but an excavation revealed not only a lack of remains, but moreover, a complete lack of any evidence connected with the children. While undergoing a partial demolition in 1996, the building was again searched, but once again, nothing connected to the children turned up. Additionally, although a selection of suspects guilty of other kidnappings and murders over the years emerged—among them Bevan Spencer von Einem, Arthur Stanley Brown, James Ryan O’Neill, and Derek Percy—none of them was positively identified as the abductor.

In recent years, businessman Harry Phipps, chairman and co-founder of Castalloy, now deceased, has been named as a possible suspect; he has yet to be linked in any concrete way to the case, though, so it’s probably best to take this claim with a grain of salt. As of February 2014, however, the South Australian government is still searching for the Beaumonts, as well as 15 other children who went missing or were murdered between 1966 and 2000. A $1 million reward is on the table, with Attorney-General John Rau saying, “We owe it to the families of the victims to continue the search for those responsible for those most heinous crimes against children.” Continued Rau, “It can take just one small piece of information that completes the puzzle for investigatorsor reignites the case against a particular suspect.”

If they were still alive today, Jane would be 57, Arnna, 55, and Grant, 53. For their part, Jim and Nancy Beaumont held out hope for decades that their children would one day be returned to them. They remained at their home in Somerton Park for many years, stating that it would be dreadful for the children to one day come home, only to find that their parents had moved on; they also cooperated fully in exploring every possibility, no matter how far-fetched or ridiculous it might seem. Although Jim and Nancy eventually divorced and moved away from Somerton Park, their current addresses remain on file in connection with the still-open case.

One final note: Somerton Park is where the Taman Shud case played out in 1948. A coincidence, to be sure… but eerie nonetheless.