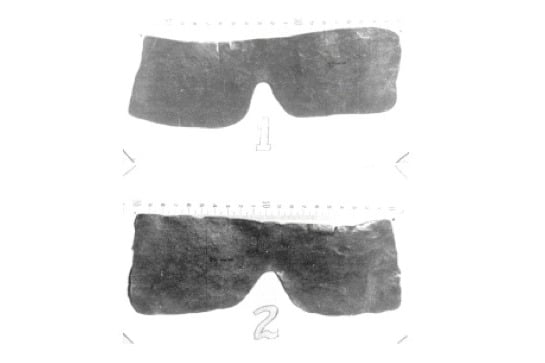 Flying a kite on an idyllic summer day might sound like the perfect day off—as long as you don’t stumble upon two dead bodies while you’re doing it. That, however, is just happened to a boy in Niterói near Rio de Janeiro, Brazil on August 20, 1966: As he flew his kite on the Morro do Vintém — Vintém Hill — he noticed something peculiar in the brush. When he went to investigate, he discovered the bodies of two men, dressed to the nines in what looked like their best suits. There was no sign of a struggle; they were wearing raincoats over their suits; and lying nearby were two wet towels and an empty water bottle. The strangest detail of all? They were also wearing lead masks.

The boy summoned the police, but due to the Morro do Vintém’s difficult terrain, authorities were unable to reach the bodies until a day later. Upon arrival, however, they also discovered a small notebook at the scene. Written inside was the following:

Which translates from Portuguese to English as: 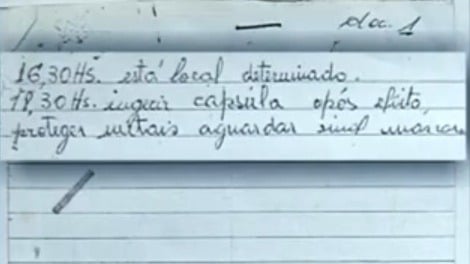 Curiouser and curiouser. Who were these two men? Clearly they had gone to the location of their deaths knowing that something was to happen—but what? Had they been given instructions? What was in the capsules they swallowed? Was that what had killed them? And perhaps most pressingly, what on earth was the deal with the masks?

The men were eventually identified as Manoel Periera de Cruz and Miguel Jose Viana, two electricians who lived several towns away in Campos dos Goytacazes. Their autopsies unfortunately failed to offer any answers; the cause of death couldn’t be determined, possibly due to the fact that no toxicological tests were conducted. The coroner’s office had apparently been slammed in the days surrounding Cruz and Viana’s discovery; you’d think that a pair of mysterious deaths would get top priority, but apparently that wasn’t the case here, so they just sat in the morgue, decomposing, until the coroner finally got around to examining them. By the time the autopsies happened, the internal organs were too badly degraded to be reliable test subjects. Whoops.

In spite of the gaff at the coroner’s office, though, the investigation carried out by the police allowed them to piece together a rough timeline of what had happened in the days leading up to the men’s deaths. On August 17, they boarded a bus from Campos dos Goytacazes to Niterói, having told their families that they needed to pick up some materials for work. They arrived in Niterói at 2:30pm; receipts for both their raincoats and the bottle of water were found on their bodies, so it’s believed that they purchased them around this time. Both the clerk and a waitress from the bar that sold them the water told police that the men—Viana in particular—looked nervous and concerned about the time. After they purchased the water, they climbed in a Jeep with two unidentified men; the Jeep then disappeared up the hill. 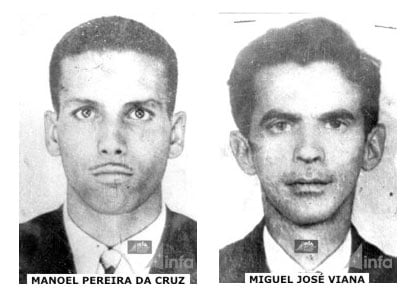 That was the last time anyone saw Cruz and Viana alive. It was another three days before the kite-flying boy found them, and we still don’t know how or why they died.

Obviously there are a lot of questions that remain about the whole thing; however, the biggest one concerns the masks from which the case gets its name. Although it’s presumed that the lead masks were of the sort used as protection against radiation, this may not actually be the case. Skeptoid points out that masks used for protective purposes by those working in radioactive environments cover the entire head and face; since the ones found at the scene covered only the men’s eyes, they were clearly something different. It’s tempting to connect the masks and the bizarre instructions in Crus and Viana’s notebook to the reports that claim the area around Morro do Vintém was a prime spot for UFO sightings… but I think that’s pushing it.

But there’s also this: Charles Bowen writing for Flying Saucer Review in 1967—a year after the mysterious deaths—found that the whole thing might have been a pair of UFO fanatics’ failed attempt at getting in touch with extraterrestrial life forms. Cruz and Viana appeared to be part of a local group who called themselves “scientific spiritualists.” Along with a friend, Elcio Gomes, they had built some sort of device in Cruz’s garden about two months prior with which they hoped to contact Mars; unfortunately it exploded, although that doesn’t seem to have done anything to dampen the men’s spirits. Gomes was questioned by the police twice; he told them about their activities as “scientific spiritualists” the second time round, which lead to the police finding tools and scraps presumably used in the creation of the lead masks. They also found a notebook in Cruz’s workshop with highlighted passages referring to the “intense luminosity” the trio believed surrounded spirits. It’s possible that the lead eye masks were made to protect not from radiation, but from this “intense luminosity.”

Mystery of the Month: The Lead Masks Case.

What Happened on Vintém Hill?: The Mystery of the Lead Masks.