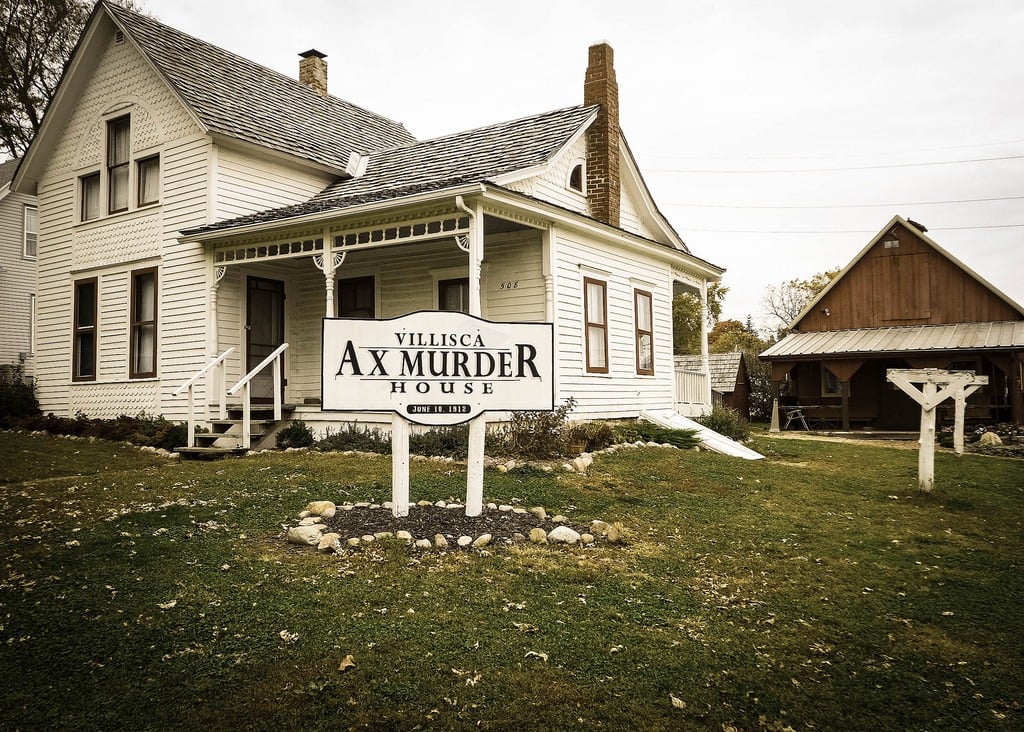 To be honest, I couldn’t really tell you whether I believe in ghosts; I probably won’t until I see first-hand proof for myself, but that’s never stopped me from reading up on as many “real life” ghost stories as I can. As a result, I’ve long dreamed of taking a road trip of the US that would hit as many supposedly “haunted” locations in the country as possible. I’m not sure if I’m ever going to get the chance to do it, but if I did, the locations I would visit I’ll file here under “Haunted Road Trip.”

In the town of Villisca, Iowa, there is a house. Of course there are many houses in Villisca—it is, after all, home to some 1,300 people—but this one is special. It doesn’t look like much from the outside; two stories, not particularly large, made of white clapboard with a small porch out front. But like many unassuming locations, this particular house has seen more things than it lets on. Its official name is the Josiah B. and Sarah Moore House, although it’s known more commonly by another name: The Villisca Axe Murder House. The house was originally built in 1868 by George Loomis; Josiah bought it in 1903, and he, his wife, Sarah, and their four children, Herman, Katherine, Boyd, and Paul, lived there quite happily for nine years… until one summer night in 1912 changed everything.

On the evening of June 9—a Sunday—the Moore family and two of Katherine’s friends, Ina and Lena Stillinger, participated in the Children’s Day Program held by the town’s Presbyterian church; afterwards, Ina and Lena were invited to spend the night with the Moores. The program wrapped up at 9:30pm, after which the Moore family and the Stillinger sisters walked home. They arrived at the Moores’ house between 9:45 and 10pm.

But by 7am the morning of June 10, the Moores’ neighbor, Mary Peckham, noticed that the family hadn’t emerged from their home to do their morning chores. Concerned, she knocked on their door; when no one answered, she tried to open it, only to find that it was locked. So she did what any good neighbor would do and let the Moores’ chickens out before calling Josiah’s brother, Ross. Ross, who had a copy of the house key, unlocked the front door. He went in.

And in the downstairs guest bedroom, he found two bodies covered with a sheet, a bloody axe lying alongside them.

Ross stepped away from the crime scene and called Josiah’s hardware store, reaching one of the store’s employees, Ed Selley. Ross told Selley to fetch the town’s Marshall, Henry Horton, saying only, “Something terrible has happened.”

Horton arrived on the scene around 8:30am and proceeded to walk through the house. When he came out, he told Ross that he had found somebody murdered in every single bed. Each victim’s head had been covered with their bedclothes, and each had been struck anywhere between 20 and 30 times with the blunt end of an axe. The bodies in the guest room belonged to the visiting Stillinger girls.

To make a strange case stranger, there was no sign of forced entry, and the curtains of each window had been drawn. A four-pound slab of bacon was found leaning against the wall next to the axe in the guest room; a second slab sat in the ice box. On the kitchen table, a plate of uneaten food was found next to a bowl of bloody water. All of the mirrors in the house and the glass in the entry doors had been covered with pieces of clothing taken from the house’s dresser drawers. The plaster in the ceiling of the master bedroom remains chipped to this day, a souvenir of where the axe hit it on the upswing.

Doctors at the time were able to put together a rough timeline. They estimated the murders to have taken place sometime between midnight and 5am; it’s suspected that whoever was responsible for the crime let themselves into the house while the family was at the church and hid in the attic until they returned home. Beginning in the master bedroom, the killer—or killers—murdered Josiah and Sarah before moving on to the southwest bedroom and attacking the children. Then the perpetrator headed downstairs to the northwest bedroom for Ina and Lena. All of the occupants of the house were believed to be asleep at the time of the attacks—except, that is, for Lena Stillinger, whose crosswise position on the bed and defensive arm wound led investigators to believe she fought back. At the times of their deaths, Josiah was 43 years old; Sarah, 39; Herman 11; Katherine, 10; Boyd, seven; Paul, five; Ina, eight; and Lena, 12.

We still have no idea exactly what happened, or who did it.

A $2,000 reward was issued for the capture of the killer; but although a botched investigation yielded a handful of suspects, no one was ever convicted. The murder investigation was officially closed in 1917.

…But of course that’s not the end of the story. Since the events of that evening in 1912 unfolded, visitors to the house have reported everything from hearing strange noises to seeing what might be the specter of the murderer. A young couple who owned the house in the 1930s felt on numerous occasions that there was someone else inside with them; two young girls who lived there with their parents between 1963 and 1971 often returned to their rooms to find their drawers open and clothing strewn about; many have heard the sobbing of children and the sound of someone walking up and down the stairs; and closet doors have been known to open on their own.

The Josiah B. and Sarah Moore House is located at 508 E. Second St. in Villisca, IA. Perhaps unsurprisingly, it changed hands numerous times in the decades following the murders; it is currently owned by Darwin and Martha Linn, who purchased  it in 1994 and restored it to its original condition. I know from watching the Travel Channel around Halloween too much that you can tour the house and even stay in it overnight; for more information about how to book your very own haunted vacation, visit the house’s official website.

Speaking of the Travel Channel (man, sometimes I really miss having cable), here’s the clip of their Most Terrifying Places in America special focusing on the Villisca Axe Murder House:

Villisca: Living With a Mystery

The Ghosts of the Villisca Axe Murder House