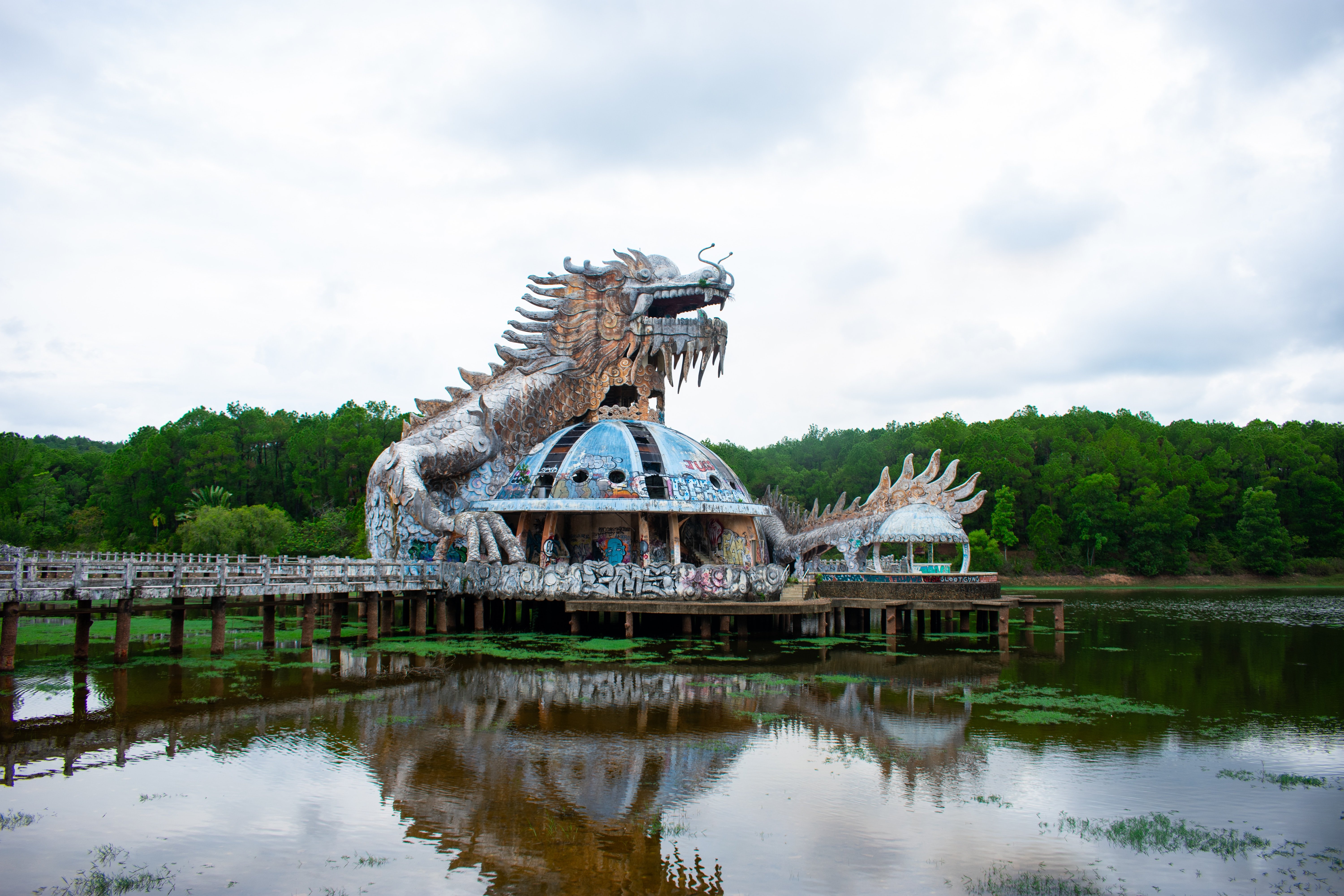 It’s not hard to find these days; heck, if you’re willing to shell out a small “admission fee” to the security guard at the decaying gate, you’ll have free reign to explore to your heart’s content. But even as grand as it appears now in its rapidly collapsing state, what you’ll see of the abandoned Hồ Thuỷ Tiên water park in Hue, Vietnam doesn’t hold a candle to what the place once looked like in its prime.

“Water park” is perhaps a misnomer; although Hồ Thuỷ Tiên did once contain a water park, this area was just one piece of the larger whole. It might more accurately be described as an entertainment complex, or even a resort. Among the offerings were a sculpture garden, an amphitheater, and an aquarium housed within a giant stone dragon, in addition to the water park. More attractions were planned, as well; villas, for example, were under construction at one time, though they were never finished. The resort’s star never quite rose as highly as its builders and investors had hoped, resulting in the property’s current state — or fate, depending on your point of view.

Construction began on Hồ Thuỷ Tiên in 2000, with the complex opening in June of 2004. It cost upwards of 70 billion VND — about $3 million USD — to build; astonishingly, though, that sum only covered part of what the resort had eventually hoped to offer. Upon opening, Hồ Thuỷ Tiên was still only partially completed.

To be fair, though, what was there at the time was pretty spectacular: Waterslides and pools, an aquatic playground, the sculpture garden and the outdoor theatre, and at its center, the dragon, inside of which one could find exotic fish and wildlife and spectacular views of the park all offered a wide array of ways to keep oneself both entertained and cool on a hot summer’s day. Set amongst the lush greenery of the area also known as Hồ Thuỷ Tiên, or Thuỷ Tiên Lake, it looked just as idyllic as you’d think.

And yet, the fun only lasted a few years: By the end of 2011, the park, still only half-finished, had closed.

Although a number of English language sources insist that it isn’t known exactly why the park closed, that’s not entirely true; according to Vietnamese sources, it shut down for the same reason that so many theme parks — especially expensive ones — do: Money. Poor attendance combined with high operating costs and inefficient management made the park a remarkably unprofitable venture, so after roughly seven years of operation, Hồ Thuỷ Tiên shut its gates.

There was talk for some time about a revitalization project meant to breathe new life into the park; indeed, circa 2013-2014, the Hue Tourism Company sold the entire resort to the HACO Hue Investment Construction and Trading Group Co., Ltd., who reportedly planned to turn the property into a “high-class eco-tourism area” boasting restaurants, spa services, performing arts venues, sports facilities, campgrounds, and even a convention center. But none of these plans have come to fruition; as of 2016, the HACO Hue company was reportedly deeply in debt and unable to implement the revitalization project.

But despite its lack of commercial success, Hồ Thuỷ Tiên has seen quite a bit of success as an off-the-beaten-path destination. Those who explore it encounter first its gate, once grand, now missing letters. As you wend your way through the property, you’ll see the remains of the waterslides, overgrown with moss and terminating in stagnant pools. The works of art in the sculpture garden have fallen into disrepair, many having been vandalized. The skeletons of the villas — which, you’ll recall, were begun, but never completed — grow ghost-like out of the jungle. The amphitheater entertains no crowds; it is full only of broken seats and wildlife.

And then there’s the dragon.

Three stories high, it rises out of the center of Thuỷ Tiên Lake — the natural lake, not the artificially constructed pools — with weathered bridges providing access to it on three sides. Should you venture across one of those bridges — and should you venture inside the dragon itself — you’ll encounter the aquarium it once housed; you’ll notice, however, that the fish are all gone, the tanks smashed, and the enclosures empty. (Several of those enclosures once held crocodiles, which escaped after the property’s abandonment and wandered the property for some time. They’ve since been removed — but you can never be too careful.) There’s graffiti all over the place — even straight up through the dragon’s insides, through which you can climb, thanks to a series of spiraling staircases, complete with ribs and a spine, all the way up to the creature’s mouth.

The view that greets you at the top is stunning.

And — even better — it’s actually quite easy to visit.

Although urban explorers had been venturing into the abandoned park with some degree of frequency following its 2011 closure, a new wave of interest in the place arose in 2016, thanks to the publication of a largely photo-centric piece about Hồ Thuỷ Tiên by the Huffington Post at the beginning of that year. In the time since, the proliferation of explorers has led to the place being findable right on Google Maps. It’s true that you might have to drive there from Hue City (it’s often recommended that you rent a motorbike to get yourself to the resort, although some visitors have simply booked the services of a car and driver), as well as hunt around a bit for the entrance once you arrive in the general area; once you’ve actually located the gate, though, it’s reportedly easy sailing.

You might not even have to worry about getting caught: According to Atlas Obscura, there’s typically a “quasi-guard posted at the gate collecting ‘admission’ to the site.” Visitors who have encountered this situation have noted that after paying the “admission,” they were able to wander around the site freely. Heck, there’s occasionally even a cart selling refreshments to explorers located inside.

It’s worth noting, though, that there’s a darker side to the story of Hồ Thuỷ Tiên, as well — one beyond lost investments and a formerly sumptuous resort reclaimed by nature: Reportedly, the land on which the entertainment complex was built was forcibly taken from the Thien An monastery by the government and appropriated for the purposes of the resort. I’ll admit I’m not totally clear on what the situation is — pretty much all of the reporting on the subject is in Vietnamese,  which I can only read through the imperfect lens of Google Translate, on top of which is the fact that I’m not nearly familiar enough with Vietnamese politics, policing, and religion to understand the nuances of the ongoing story — but from what I understand, the Vietnamese government and the monks of the Thien An monastery have been locked in battle over the monastery’s land for some years.

But if you’d like to visit, go ahead. Look around. Be careful, of course, and if you’re barred entry or asked to leave, depart quietly. But you might get lucky, allowed access and exploration if you’d like to go off-road for a bit.

Just… don’t jump in the water.

No one really knows what’s lurking in there anymore.