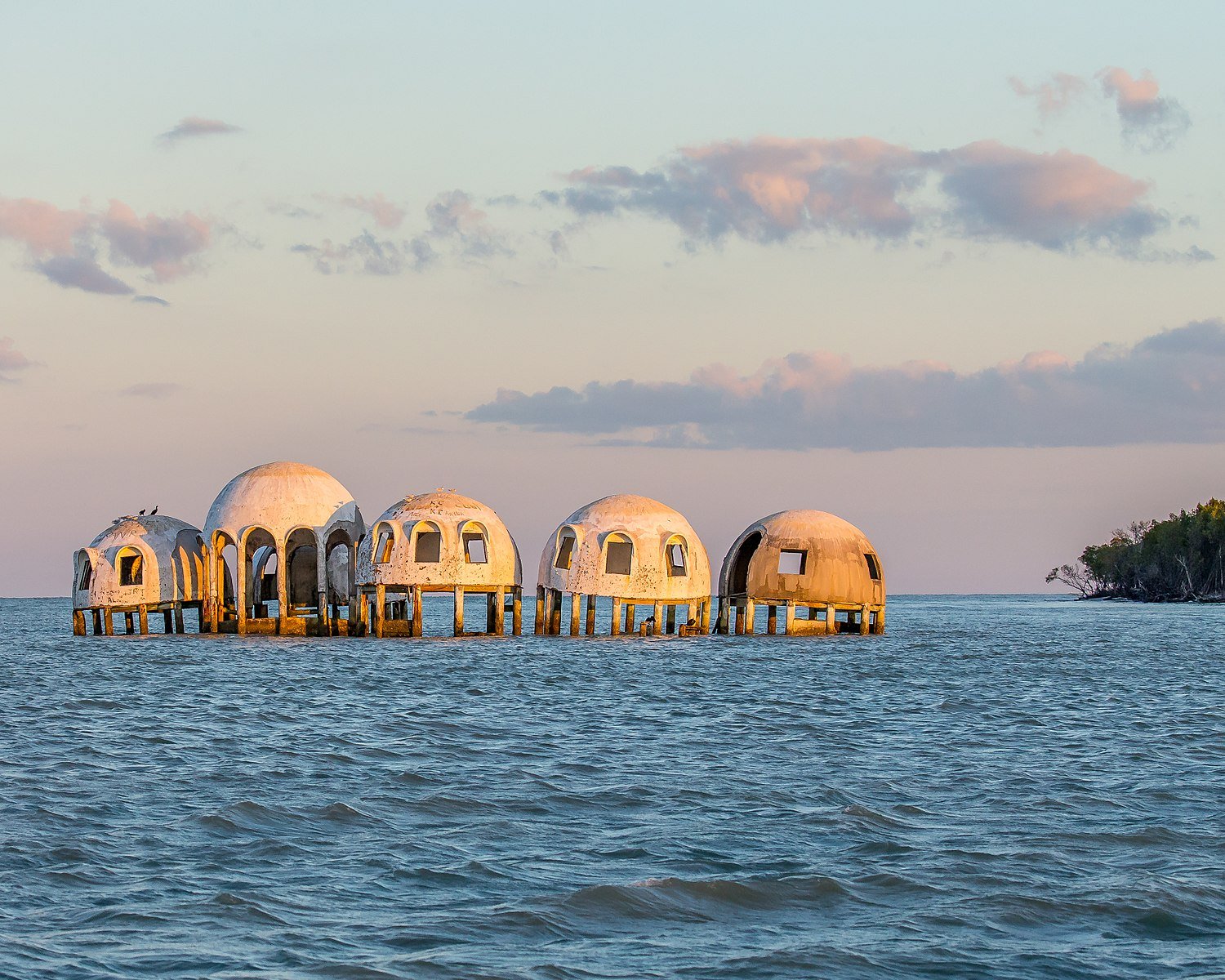 Just off the southwestern coast of Florida — all the way down by the Everglades, near a small cape called Cape Romano by Marco Island — there’s a curious sight: A strange, dome-like ruin standing on stilts in the water. It looks like the moisture farm on Tatooine where Luke Skywalker grew up in the original Star Wars film, except instead of being surrounded by dessert, it’s surrounded by ocean. No one lives there anymore, of course; it’s uninhabitable. But the Cape Romano Dome Home, as it’s known, was once a lush vacation home for retired oil producer Bob Lee and his family — a relaxing retreat meant to be entirely self-sustaining. Now, though, the domes are slowly sinking into the waves as the shore beneath them erodes.

Due both to the business he worked in and the period in which he worked in it, Lee made a fortune relatively early in life and was subsequently able to retire at the age of 44. When you find yourself in a position of no longer having to work at such a young age, though, you typically need to find something to occupy your time — and for Lee, that something ended up being tinkering. According to Lee’s daughter, Janet Maples, who spoke to Coastal Breeze News about the Dome Home in 2012, her father “loved inventing things”; as a result, he was often a hit with kids in particular. “He was just fun to be around — a really adventurous guy way before his time,” Maples recalled.

In the late ‘70s, Lee began work on his biggest invention yet. Throughout 1978 and 1979, he bought up a number of plots of land on Cape Romano; additionally, he started building a prototype of what would later become the Dome Home at his home in Gatlinburg, Tennessee. According to Maples, the prototype — which was still standing as of 2012 — had an issue with moisture; however, Lee solved that problem before beginning to build the final version of the house at Cape Romano. In 1982, the Dome Home was completed.

The house seemed to be one with the land on which it had been built. It ran on solar power, harnessed from the rays of the hot Florida sun (although there were also several backup generators in the event of sustained cloudy weather). The concrete walls had been made from sand taken directly from the island. The water running from every tap was rainwater that had been collected via uniquely designed gutters and purified onsite. Lee had invented a heating system that heated the house from below; what’s more, Janet Maples told Coastal Breeze News, he had created “an invention that would bring logs and drop them on the fireplace that came through the wall of our den.”

And, of course, there was its shape: A collection of white, interconnected domes, it had the appearance and feel of living inside a light, airy bubble. Said Maples to Florida Weekly in 2013, “My dad thought the corners of rooms were wasted space, as were the corners of the ceiling. He thought the dome ceiling gave the feeling of openness. He was right. The rooms felt very large and open.”

It might surprise you to learn that the Dome Home had no docking structures, but the truth is that it was never intended to be approached by boat. Indeed, at the time it was built, it was on dry land. It had been built on pilings, though, to account for high waters during storms — for Lee had taken into account what a house built on the beaches of Southwest Florida would have to be capable of withstanding. Even the shape of the home had been designed with a purpose in mind: The rounded roofs had no corners or sharp edges, which meant that — in addition to allowing easy capture of rainwater runoff for the home’s water supply — they would be able to deal with the high winds that can accompany the tropical storms and hurricanes Florida so frequently encounters.

The collection of huge, white domes was an arresting sight and spawned a number of tall tales about the house locally. Maples even recalled overhearing one person in line at the Marco Island drug store insist that the domed building was “[guarded] with machine guns.” But in truth, it was just a home — a unique-looking and well-appointed home, but a home nonetheless. According to Maples, the “fun part” for her father was building the place; but the slow pace of life on the island? That was a big draw, too. “He also loved the seclusion of living on the island,” said Maples to Coastal Breeze News. He adored simply “fishing, shelling, and watching the weather.”

Just a few years after the family first moved in, though, Lee sold the Dome Home to George Wendell, who meant to use it as a part of a business venture. But just a few years after that, ownership of the property reverted back to the Lees again. They stayed there, making it their primary residence, until 1993.

Interestingly, it wasn’t Hurricane Andrew, which struck in 1992, that caused the Lees to leave the Dome Home. Indeed, the house didn’t suffer a great deal of structural damage during the storm; the rounded shape of the building had seen to that. The windows, though, proved to be a bit of a problem. Said Bob Lee’s grandson, Mike Morgan, to Coastal Breeze News in 2012, “Andrew didn’t do a ton of damage, really. The main structure’s design is very high wind resistant because there’s no sharp edges or flat surfaces for the wind to catch on. That was another thought process that my grandfather had when he built them. But the windows, obviously were not, so that was the main damage.” Still, though, the Lees were able to stay in the house for another year following the storm.

The big issue turned out to be shoreline erosion. As Cynthia Mott put it at Florida Weekly in 2013:

“Time and tides have taken their toll. Cape Romano has undergone a transformation, a total reshaping. Morgan Pass, once a navigable stretch of water on the backside of the beach, filled in with sand. Thumbing through historical photos, the shifting ground makes it appear the domes crept themselves into the sea, until today they are totally surrounded by water. Cape Romano got a makeover and the dome homes got a new yard.”

As of 2018, the Dome Home sits about 180 feet offshore. It’s surrounded by the sea and completely uninhabitable.

An effort was made to rehabilitate the building about 15 years ago; in 2005 — shortly before Hurricane Wilma hit — Naples, Fla. resident John Tosto bought it, fully intending to move the domes to safe ground and renovate it into a livable home again. However, he was unable to do so: Wilma eroded the remaining uplands that Tosto owned so badly that there was nowhere else to which the house could be moved. In 2007, he was ordered by government agencies to demolish the Dome Home, but declined to do so and was fined steeply as a result. The land the house sits on is now owned by the state, leaving the Dome Home’s fate uncertain — all the more so in the wake of Hurricane Irma in 2017, which caused two of the six domes to collapse. A proposal to sink the domes and turn them into a diving reef has proven to be unpopular with locals, for whom the house is a beloved landmark.

It’s likely that eventually, the sea will claim the domes for itself — and probably sooner, rather than later. But for now, four of the Dome Home’s signature domes remain, their tops baking in the sun as the waves lap at their feet. You can still see them — but tread carefully..

In the absence of humans, you never know what else might have moved in and decided to call the place home.