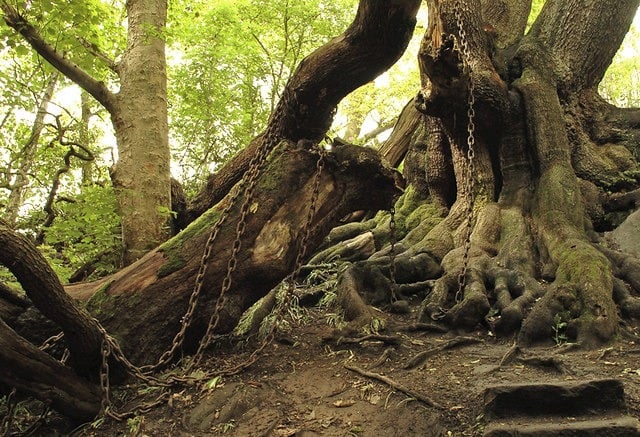 Period/location of origin: Subject’s precise age is unknown; however, it is believed to date back roughly 1,300 years, or circa 700 C.E. Its current… unique appearance is thought to have been the product of certain actions taken sometime in the first half of the 19th century. Subject is located in the woods near the village of Alton in Staffordshire, UK (not to be confused with the town of Alton in Hampshire, UK).

Appearance: Subject appears to be an ancient oak tree bound by thick, hand-forged chains. It lies along the Barbary Gutter trail passing through the forest by the estate known variously as Alton Mansion, Alton Abbey, and Alton Towers. This estate once served as the seat of the Earls of Shrewsbury. Subject is currently partially collapsed and in poor condition.

Modus operandi: Subject may or may not be operating as a key component in an alleged curse. According to the terms of this alleged curse, every time a branch falls from subject, a member of the Talbot family — the family of nobility which has historically held the title of Earl of Shrewsbury — will die.

Containment: According to some sources, the chains binding subject serve as the containment method, having been put in place in order to brace subject and prevent any branches from falling. No additional containment is currently required.

Additional notes: In order to fully understand subject, it is necessary to have a firm grasp of the history of the village of Alton, the title of the Earl of Shrewsbury, and the Alton Towers estate.

The village of Alton is ancient. Once known as Alverston or Alverton, its first record dates back to 716 C.E.; however, the first fort built on the land dates back even further: In 100 B.C.E., during the Iron Age, the location now called Bunbury Hill played host to a fortress that provided security to the area. Bunbury Hill would later become the spot on which Alton Towers — the seat of the Earls of Shrewsbury — would be built.

The hereditary title of Earls of Shrewsbury has been created twice in the Peerage of England: First in 1074, and again in 1442. The first Earl of Shrewsbury was Roger de Montgomerie, who had been a principal counsellor for William the Conqueror. The title was subsequently held by Roger’s sons, Hugh and later Robert; however, after Robert rebelled against King Henry I, who had been William the Conqueror’s fourth son, the was declared forfeit in 1102.

In 1442, the title was created for a second time; John Talbot, 7th Baron Talbot, was named Earl of Shrewsbury during the Hundred Years’ War. 22 lords have held this title to date; the current and 22nd Earl of Shrewsbury is Charles Henry John Benedict Crofton Chetwynd Chetwynd-Talbot. The heir apparent is the current earl’s son, James Richard Charles John Chetwynd-Talbot, Viscount Ingestre.

Alton Castle was initially built in the 12th century, roughly a century after the Norman Conquest. John Talbot, who would become the Earl of Shrewsbury when the title was created for the second time in 1442, acquired it upon his marriage to Maude Neville, 6th Baroness Furnivall, whose family had held it since the 12th century. However, the castle was destroyed during the English Civil War, which ran between 1642 and 1651, and later redeveloped into a hunting lodge. During this time, the Talbots used Heythrop Park in Oxfordshire as their primary residence, with the hunting lodge functioning as their summer home.

However, in 1801, Alton Castle was deemed beyond repair. The 15th Earl of Shrewsbury, Charles Talbot, subsequently began building a Gothic-style manor approximately one and a half kilometers away from the castle. This manor, which was designed largely by Palace of Westminster architect Augustus Pugin, would become Alton Towers — which, after a fire destroyed the interior of Heythrop Park, would in turn become the Talbots’ primary residence.

Alton Towers was sold in two parts in the 1910s and 1920s: Much of the estate was sold at auction by the 20th Earl of Shrewsbury in 1918, with the rest being purchased by local businessmen in 1924. Following the Second World War, bits of the gardens and grounds began opening up to the public, and in the 1980s, the area surrounding the estate saw major development as a full-blown amusement park. Today, the Alton Towers Resort sees several million visitors each year, with the theme park, water park, hotels, and other amenities making it one of the most highly visited amusement parks in the UK.

The manor is still partially located on the grounds of the resort — and subject lies nearby, on the Barbary Gutter trail formerly used by the Earls of Shrewsbury as a passage to St. Giles Church in nearby Cheadle. The chains were installed on subject by the 16th Earl of Shrewsbury, John Talbot, sometime during his occupancy of both the title and the estate during the 19th century. It is commonly believed that the chains’ function was — and is — a conservation measure: They are meant to help support subject’s own weight as subject ages and grows weaker.

According to this legend, the 16th Earl encountered an old woman begging by an old oak tree on the Barbary Gutter on his way home one autumn night either in 1821 or during the 1840s (accounts vary as o the specific year). The Earl, however, refused to give the woman any money and demanded she leave his property — so in retaliation, she placed a curse on him and his family, proclaiming that for every branch on the oak tree that fell, a Talbot would die.

Reports vary as to what allegedly happened next. In one, a violent storm is said to have occurred that night, bringing down one branch of the oak tree — and, shortly after the branch came down, a member of the Talbott family who had hitherto showed no ill health or weakness died suddenly and without warning. In another, there was no storm; insead, the Earl’s son is said to have gone out riding the next day and died after being struck by a falling branch originating from the oak tree. (This version is unlikely to be true; the 16th Earl’s only son died in infancy and therefore could not have gone out riding on his own and died in a subsequent accident. The Earl’s two daughters, Mary Alathea Beatrix Talbot and Gwendoline Catherine Talbot, survived into adulthood and each married Italian princes.)

Another version begins by following the story of the storm, but then takes it a step further: After the branch falls and the family member dies, the Earl retrieves the branch, brings it back to the manor, and secrets it away in a vault hidden deep within the house’s walls. Here, he spends years experimenting on the branch and attempting to break the curse. It should be noted, though, that this version was created as the backstory for a ride at the Alton Towers amusement park; called Hex, the ride is a “Madhouse”-style attraction and opened during the 2000 season. The queue for Hex passes through part of the Alton Towers estate itself, although the ride is housed in a separate, adjoining building built specifically for that purpose.

All of these versions have one thing in common: According to each of them, the Earl ordered the oak tree to be bound in chains — thus preventing any further branches from falling and thereby guarding against the destruction of the Talbot family line. Subject, it is said, has remained chained ever since.

The veracity of all versions of this legend is up for debate. It also should be noted that after a branch fell in 2007, the Talbot family stated that no members of their family died in the aftermath.

Recommendation: Subject may be safely viewed from the Barbary Gutter trail in Alton. The trail passes through the woods by the Chained Oak Farm Bed & Breakfast. Subject’s precise location may be seen here.

However: Do not approach subject.

Do not climb subject.

And certainly do not break any branches off of subject.

Odd Staffordshire: The Legend Of The Chained Oak at the BBC.

The Legend Of The Chained Oak at the Stoke Sentinel.

The Fascinating History Of Alton Towers.

The Ghosts Of Alton Towers.

The History Of Hex: Legend Of The Towers.