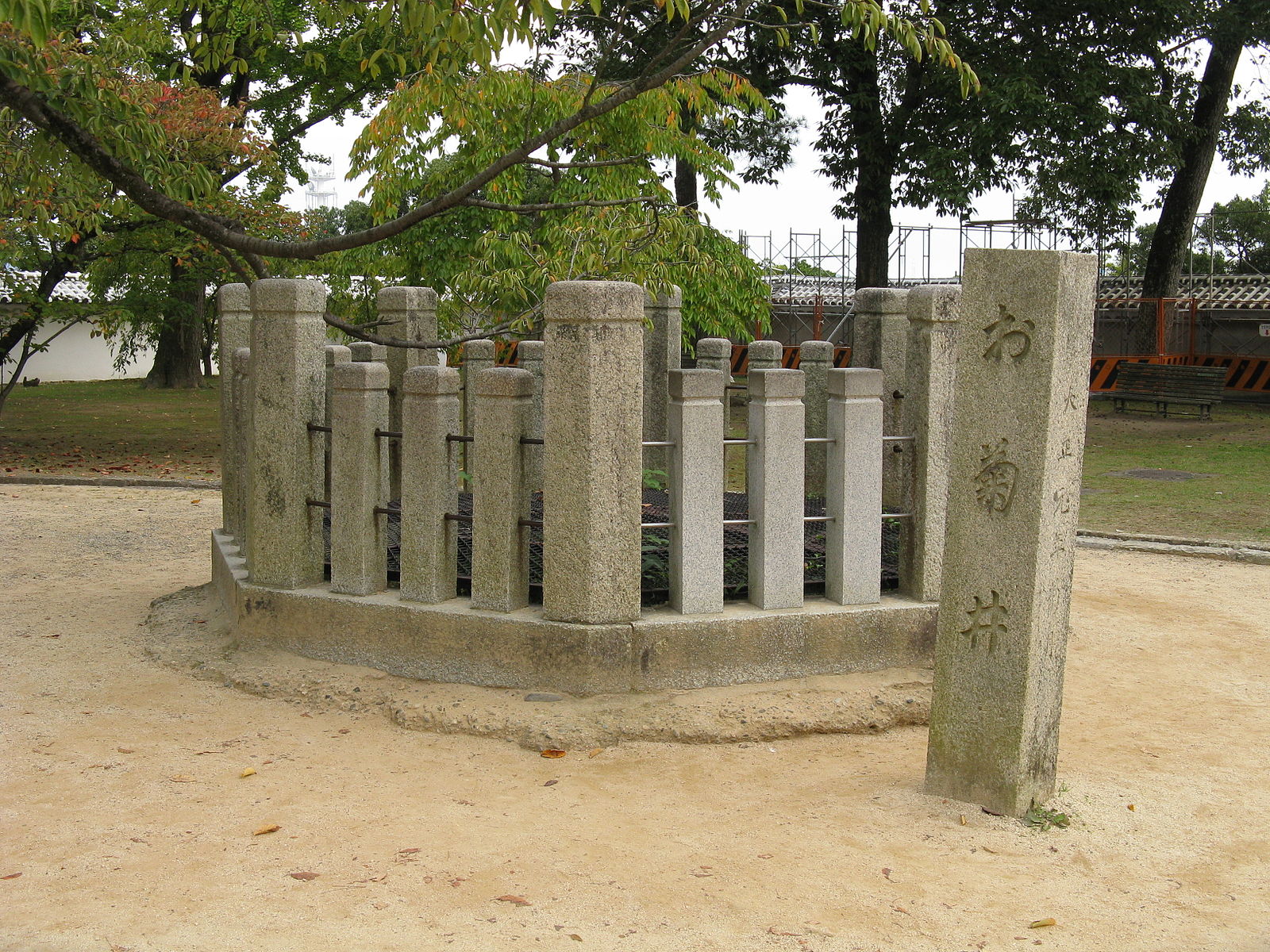 Type: PI (Prison for the Incorporeal).

Period/location of origin: Subject is located on the grounds of Himeji Castle, which stands in the Hyogo Prefecture city of Himeji in Japan’s Kansai region. Subject’s period of origin is unclear; construction of Himeji Castle spanned several hundred years, from the end of the Kamakura period through the beginning of the Edo period, although the style of the fortress is most recognizable as the variety popular during the Azuchi-Momoyama period.

Appearance: Subject appears to be an octagonal well on the grounds of an Azuchi-Momoyama-type Japanese castle. The well is surrounded by 32 stone pillars arranged in a particular pattern: Groups of three short pillars run along each of the octagon’s sides, separated by slightly taller pillars placed at each of the eight corners. The opening of the well is currently covered by a metal grating, through which vegetation growing from the bottom of the well may be seen. The well is approximately 10 meters deep.

Modus operandi: Subject houses the yurei known as Okiku (hereafter referred to as “subject prime”). Reports vary as to how subject came to be subject prime’s dwelling; however, her behavior is consistent throughout each version: Nightly, subject prime rises from subject’s depths, counting slowly from one to nine. After the count of nine, she lets out a heart-rending howl.

Subject prime is not typically known to harm targets, although exceptions may be made (see: Additional notes).

Additional notes: Himeji Castle’s first incarnation was constructed by Harima Province ruler Akamatsu Norimura in 1333. The fort was demolished in 1346 by Norimura’s son, Sadanori, in 1346, at which point the first structure of the castle complex that remains today was built. A remodeling was undertaken by feudal ruler Kurokoda Shigetaka beginning in 1545 and concluding in 1561; several decades later, another remodeling commenced, led by Toyotomi Hideyoshi in 1581. By 1600, Himeji Castle had come under control of Ikeda Terumasa following the Battle of Sekigahara, at which point further alterations and additions were made: Between 1601 and 1609, the three-story keep Hideyoshi had built was removed; a new structure was built in its place; and three moats were constructed. The castle was later taken up by Honda Tadamasa in 1617, who added several more buildings to the complex.

The castle was abandoned in 1871, briefly used as army barracks, and almost demolished by the government; however, army colonel Nakamura Shigeto intervened, ensuring Himeji Castle’s continued existence. It was heavily bombed during the Second World War, after which repairs were undertaken beginning in 1956. In 1993, Himeji Castle was recognized as a UNESCO World Heritage Site.

It is unknown during which period of construction subject may have been built; however, it may be confirmed as having occurred prior to 1741. This year marked the first stage adaptation of subject prime’s origin story, a bunraku puppet play titled Bancho Sarayashiki. Additionally, a full-length kabuki play was produced in 1824, while a one-act kabuki play arrived in 1850. A third kabuki version debuted in 1916.

Several different versions of subject prime’s origin story exist, although common elements exist between them: The stories all center around a set of 10 valuable, decorative plates, one of which becomes broken or lost; the subsequent punishment of subject prime for the crime; and subject prime’s attempts as a yurei to locate the 10th plate.

In one version, subject prime is a serving girl who works in the house of a great samurai. After she rebuffs the samurai’s attempts to seduce her, he plots to trick her into becoming his lover anyway. He convinces her that one of the family’s 10 decorative plates has gone missing due to her negligence, the punishment for which is death. She frantically counts the set of plates over and over again, coming up short by one plate each time. The samurai tells her that he will let her live if she agrees to become his lover — but she refuses. He throws her down the well, killing her.

In another version, subject prime is again a serving girl; this time, however, she is responsible for the loss of the 10th plate: She breaks it by accident. The wife of the lord she serves is furious with her clumsiness and imprisons her, intending to cut off one of her fingers as punishment the next day. Subject prime manages to escape her prison, however; she then throws herself down the well. In a similar alternate version, the lord’s wife breaks the plate and blames it on subject prime in order to hide her guilt; the lord then enacts punishment, not by imprisoning subject prime and threatening to take one of her fingers, but by throwing her directly into the well.

Another version sees subject prime as a lady-in-waiting set to marry the retainer of the heir to the castle’s lord. The chief retainer, however, plans to murder the heir in order to take control himself and attempts to blackmail subject prime into carrying out his plan. The chief retainer first hides one of the 10 plates, then tries to seduce subject prime; when she rebuffs his advances for love of her husband-to-be, however, he tells her to count the plates. He blames her for the missing one, but says that he will lie for her and take the blame if she becomes his lover. She refuses again, at which point the chief retainer hangs her over subject and tortures her. He demands once more that she become his lover, as well as that she help him murder the heir, but again, she will not submit. He then kills her, dropping her body into the well.

In yet another version, subject prime breaks the plate as a test of her husband-to-be’s love. When he believes it to have been an accident, he pardons her; however, upon learning that she broke the plate intentionally, he kills her and disposes of her body in the well.

In all versions, subject prime rises from subject after her death as a yurei, forever counting the plates and forever failing to reach the number 10. However, subject prime’s motivations for performing these actions may vary. According to some versions, she is distressed by the missing plate and can only move on when the 10th plate is counted; in these versions, counting the 10th plate for her will allow her to finally rest. However, according to other versions, her counting is meant to torment the murderer responsible for killing her.

Subject and subject prime are believed to be the inspirations behind several notable pop culture phenomena.

Recommendation: Subject may be visited safely during daylight hours; during this time, subject prime is not active. To reach Himeji Castle, simply walk or take a bus or taxi from Himeji Station approximately one kilometer down Otemae-dori Street in the city of Himeji.

Subject may also be visited safely at night… as long as target has not done anything that might provoke subject prime’s wrath.