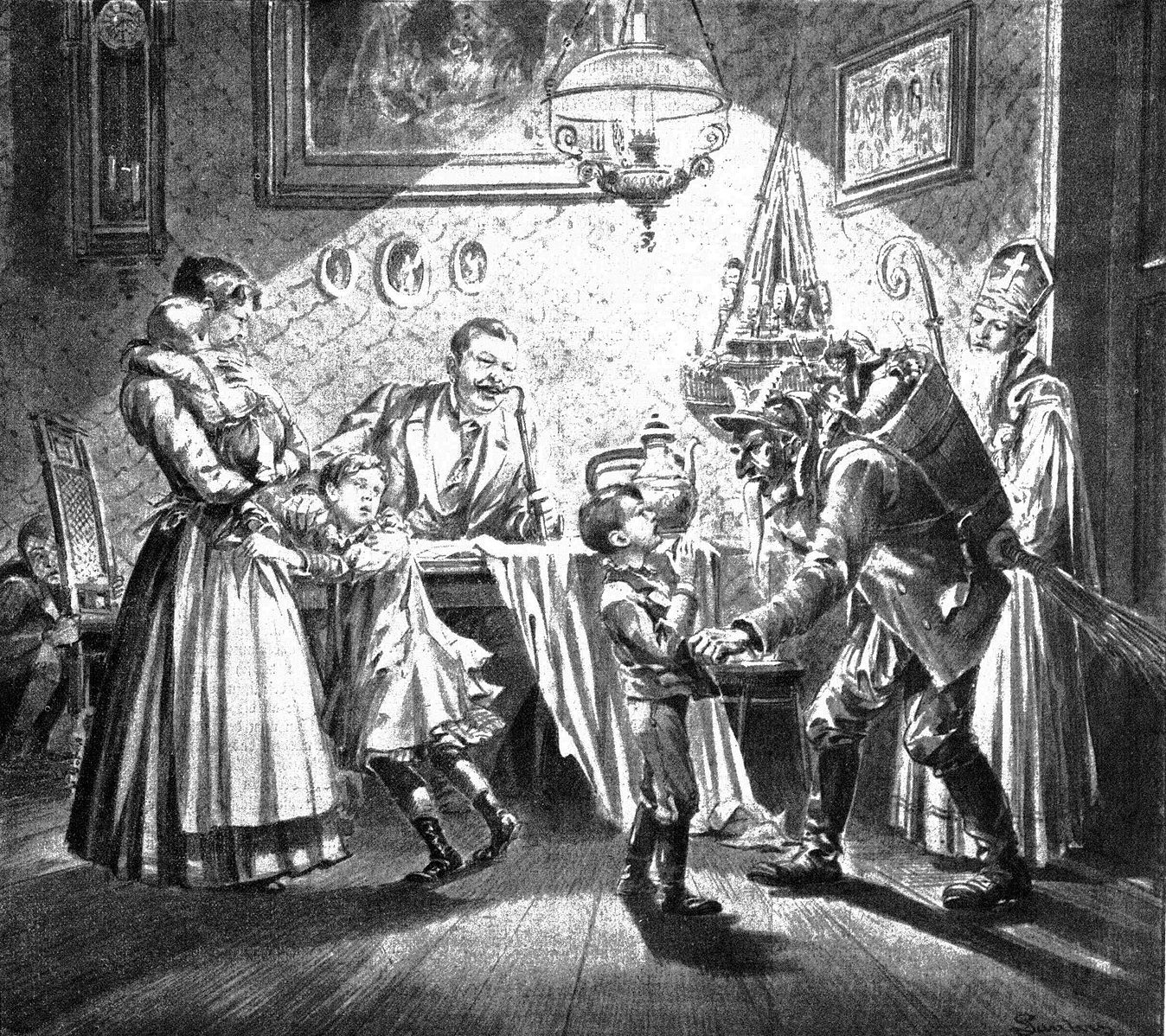 Appearance: Reports vary, but generally, subject appears to be a bipedal being with cloven hooves and horns; “part man, part goat” would be a fairly accurate description of subject. Subject is covered in dark hair, typically brown or black, but occasionally white, and has a long, pointed tongue which typically hangs out of his mouth. Subject is also fanged, bearded, and clawed, and is often depicted as having a tail.

Subject may wear or carry any of the following: Chains; belts; bells; bundles of sticks or branches, usually birch; a whip; and/or a basket or sack.

Subject’s height is unknown; he is at least as tall as a human man, but may reach heights of 12 feet or more.

Modus operandi: Subject appears at the homes of families annually on the evening of Dec. 5, known colloquially as Krampusnacht, or “Night of Krampus,” either alone or in the company of a Subject known as St. Nicholas. If traveling with St. Nicholas, subject waits outside while St. Nicholas enters each home and checks his list to confirm whether the children of the home have been naughty or nice over the course of the prior year. The children may also recite poems for St. Nicholas. If the children are determined to have been nice, St. Nicholas will bestow upon them bags of gifts and/or treats and depart.

At this point, subject will enter the home. Children determined to have been naughty may then suffer any of the following fates at subject’s hands:

If subject is traveling without St. Nicholas, subject will prowl the streets alone, entering the homes of naughty children at will and performing any or all of the previously discussed activities.

Subject’s activities may or may not be limited to Alpine towns and cities in Europe.

Note: Subject may be fearsome and cruel, but he is not unjust. Subject will never zero in on targets who don’t deserve it.

Containment: It is customary to offer subject a glass of schnapps on Krampusnacht. However, it should not be assumed that this offer will excuse targets’ naughtiness or dissuade subject from carrying out his sworn duty.

Additional notes: Subject’s name derives from the German word krampen, or “claw.” Widely assumed to be a pagan figure, subject is also often — somewhat curiously — cited as the son of Hel, the Norse deity of death and ruler of the underworld. Additionally, subject shares many physical attributes with beings of Greek and Roman mythology. This patchwork cultural background is at least partially what makes subject’s period and location of origin so difficult to pin down.

Beginning in the 12th century, the Catholic Church attempted to suppress inclusion of subject in holiday observances, citing subject’s resemblance to a certain other notable DB. In the 1920s, subject was outright banned by the Church and some political parties, making it illegal to celebrate subject in any way.

However, this suppression was unsuccessful; interest in subject began to rise again in the 1960s, and now, subject is a part of holiday observances and celebrations in many locations across the globe. Festivals devoted to subject have emerged, where followers dress up as subject and reenact its activities in a playful fashion. Subject has also become deeply embedded in popular culture, with numerous books, motion pictures, television programs, and other pieces of media focusing on everything from subject’s origins to subject’s MO.

Precisely how subject feels about being imitated and commercialized in this way remains unknown.

Perhaps he enjoys it.

Perhaps it is what he intended to happen all along.

The Origin Of Krampus.