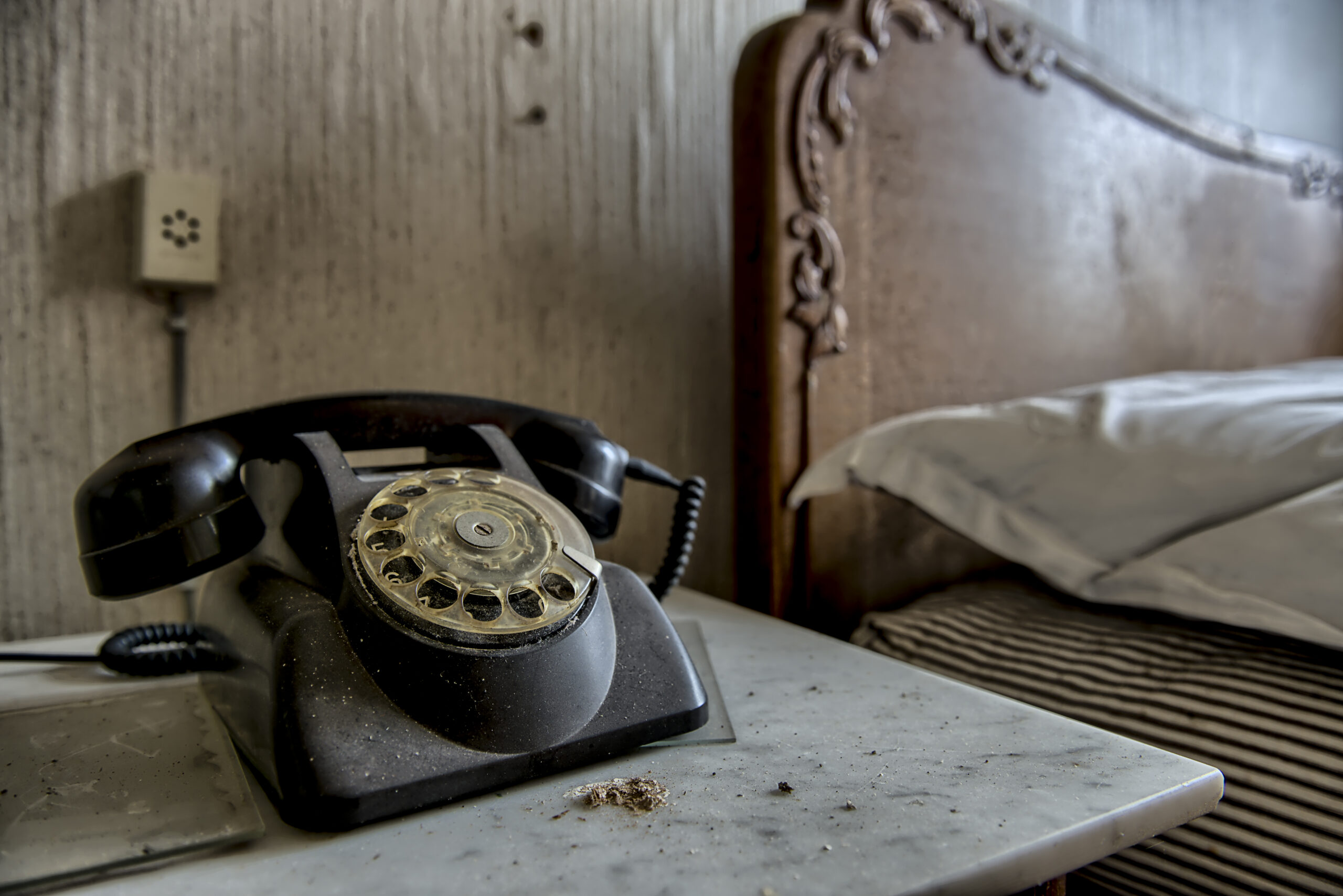 Here’s a fun thing to try the next time you feel like tempting fate: Call the phone number 801-820-0263. At first, you’ll just hear silence. If you wait a few seconds, though, you’ll begin to hear some noise — something which sounds almost ethereal, beautiful in a way. Overlaid on top of these ethereal sounds, you’ll hear a male voice speaking a series of one-digit numbers. Don’t get too comfortable, though; the soundscape will change abruptly in short order, and what it changes to isn’t pretty. An intense, jarring, sharp sort of noise some have likened to the sound of a chainsaw revving up will cut in, followed by what sounds, curiously, like a chorus of male voices recreating that same noise. Then there’s a brief beep — the sort that usually signifies when an answering machine recording has ended, prompting the caller to leave a message.

It’s intensely weird — and it’s made all the more unsettling by the fact that we know so little about what the phone number actually is. When I dial it, my phone tells me it originates in Clearfield, Utah; thanks to things like Google Voice, though, that might not mean much these days. You no longer necessarily have to be based in any particular location in order to have a phone number associated with that place. What I am pretty certain of is the fact that when you call the number, what you hear is a recording; no matter how many times you call, you’ll always hear the same thing.

But beyond those two little hints, not much is immediately apparent about this seemingly “cursed” phone number — which, honestly, is probably the scariest thing of all. If you’re too freaked out to call it yourself, here’s an audio recording of what happened when I dialed it:

See? Super weird, right? Almost incomprehensible? What on earth could be going on here, you might be wondering?

What would happen if I said the phrase “Boothworld Industries” to you? Would everything suddenly click into place for you? Would you nod knowingly, immediately developing a keen understanding of what might actually be going on here?

Good. Because that’s exactly the avenue we’re about to explore.

Created by horror writer Christopher Bloodworth, Boothworld Industries first arrived on the scene in 2013 with a story on the r/NoSleep subreddit simply titled, “630-296-7536.” A classic example of Freud’s definition of the uncanny, Boothworld Industries drives home its horror by taking something familiar — a customer service call, something called “remodeling,” a seemingly innocuous wish for you to “have a marvelous day” — and making it strange. The best part? You can actually call the phone number and get an in-universe response. Here’s the answerphone message you get if you stay on the line:

So: How does that connect to the 801 number that’s the subject of our analysis today? The short answer is that it’s all part and parcel of the same story.

In a recent video about the number, the YouTube channel ScareTheater traced the 801 number’s earliest known appearance back to March of 2016, pointing to YouTuber Brittney Crabb’s experiences with the original Boothworld number. Better known as Brittyy44, Crabb focuses her channel on real-life paranormal stories and phenomena; her videos featuring her attempts at playing a wide variety of Most Dangerous Games are particularly popular. (You may have seen one or both of her attempts at playing the Elevator Game, for example.) So, given her predilection for playing these sorts of games, it was probably only a matter of time before she dialed 630-296-7536 — and as you can see from her video, when she did so, she encountered the same answerphone message the rest of us have when we called the number.

But then, 11 days later on March 22, she posted a follow-up video with a somewhat shocking twist: Boothworld called her back. On March 16, she realized she had a missed call from the 630 number — and shortly after that, she received a text from it containing what looked like another phone number.

A lot of stories have been swirling about what happens when you call that number: Some folks have said that they heard someone saying their name; others believe that we’re listening to someone being “remodeled”; and so on and so forth. I call bullshit on people saying that they’re hearing their names repeated back at them — as I noted earlier, what we hear on the other end is a recording, with the same message playing each and every time you call. But as for whether or not the call allows us to hear a “remodeling” session? Personally, I don’t think that’s what’s happening; the Boothworld stories make it pretty clear what a “courtesy call” sounds like, and this isn’t it. I suppose it’s not out of the question, though. That chainsaw-esque sound (which I don’t really think is a chainsaw, but maybe that’s just me) is certainly… concerning.

For what it’s worth, Boothworld Industries returning phone calls seems to be a somewhat rare occurrence, but it does happen. Bloodworth did state in a interview with the website Bubblebeam Magazine in 2014 that he does call people back occasionally; he noted, “The reactions are usually fun.” Alas, I haven’t experienced this phenomenon — when I called the 630 number back in 2013, all I got was the answering machine recording, and the same was true when I dialed it again while writing this piece four years later. Several other YouTubers besides Crabb do claim to have received a call back from Boothworld Industries, though — and, of course, it’s always possible that the reason I didn’t receive one the first time round was because I didn’t leave a message asking for one. Crabb’s original video, similarly to some videos belonging to several other YouTubers who say they’ve gotten calls from the 630 number, featured her leaving a message after the beep stating that she wanted to make an appointment and requesting that whoever was on the other end return her call — so perhaps that’s a requirement for a call back.

The last time I called the number, I gave that a shot; after the answering machine message played and the beep sounded, I said, “Hi, I’d like to make an appointment. I’d appreciate a call back. Thank you,” before I hung up. I haven’t received a call back yet, but, well… I suppose there’s still time.

What is curious, though, is that Crabb seems to be one of very few people — or possibly the only person — to have received a text message from Boothworld Industries with another phone number to call inside it. In fact, I haven’t been able to find much evidence of people getting any text messages from Boothworld Industries, much less text messages containing the 801 phone number. I did find that, back in December of 2013, a YouTuber going by the name Reitanna Seishin received both a call back and a text after calling the 630 number; however, Seishin’s text didn’t contain the phone number that Crabb’s did. Here’s what she received instead:

That’s… interesting to me. The fact that the 801 number seems to originate with Crabb’s video, I mean. I don’t mean to suggest that Crabb is making it up; she swears up and down that she actually received this text, and generally I like to take people at their word unless there’s a good, solid reason to doubt them. But I’m curious about whether other people have also been texted the this phone number and just haven’t broadcast the fact that they have — or whether Crabb really is the only person to have received it.

And, of course, there’s also this: Beyond what the weird noises in the 801 number’s answering machine message are, what the heck are we supposed to do with that sequence of numbers spoken by the mysterious male voice? We’re pretty sure the sequence is “1131711317” — so what does it mean?

As ScareTheater points out, we know that the number as it stands isn’t a phone number; if you call it, you’ll just get a standard, “Your call cannot be completed as dialed” message. The same is true if you dial the number in reverse. Apparently it can be interpreted as a set of global coordinates, which one Spanish language YouTuber determined to be a series of three large buildings in Brooklyn, New York — but the trail went cold there, so it might just be a coincidence.

I tried a couple of other things with the 113 number, including converting it from decimal and hexadecimal to binary before converting that binary code to text, and mostly came up empty; however, I did get something somewhat concrete when I ran it through an Epoch Unix timestamp converter: 1131711317 refers to Friday, Nov. 11, 2005 at 12:15:17pm GMT. For what it’s worth, Peter Drucker, who basically invented the management style used in most business corporations today, died on Nov. 11, 2005 — a management style which Boothworld Industries might be said to take and apply to an extreme situation. However, it’s also likely that this tidbit, like the idea of the number being a set of coordinates, is simply a coincidence; as such, I’d take it with a pretty large grain of salt.

In any event, there’s clearly still a mystery to unravel here. These phone numbers might even just be scratching the surface — if Bloodworth’s Boothworld Industries Initiation Kit is anything to go by, there’s always more to find if you just dig deep enough.

Just… try not to get yourself “remodeled” in the process.