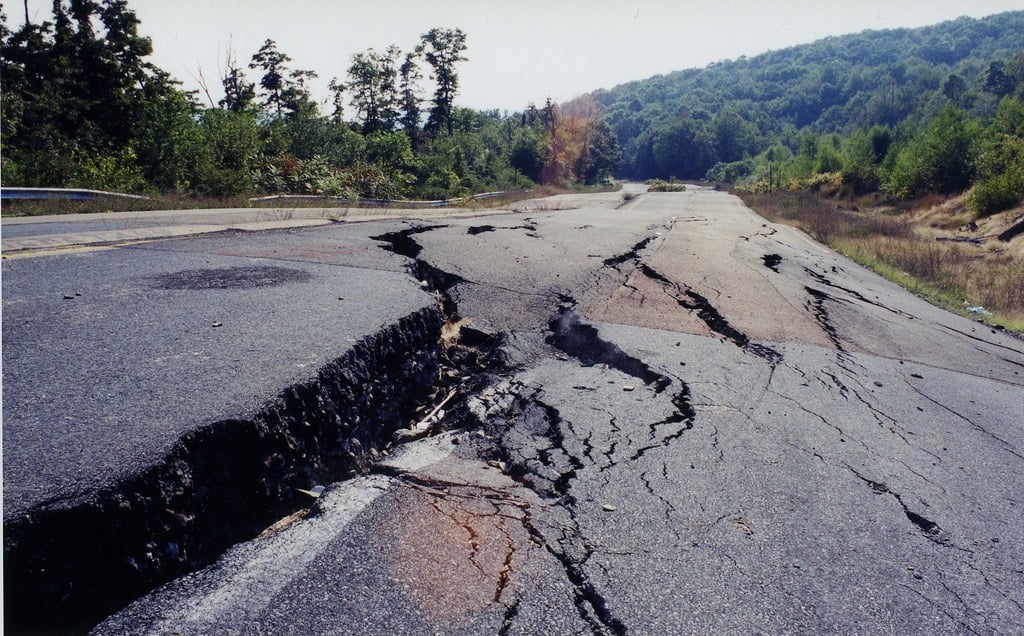 You’ve probably heard of it — the town that’s been on fire for more than 50 years. It’s called Centralia, and it’s in Pennsylvania. It’s spooky, but not necessarily because it’s haunted by ghost stories; the fact that there’s been a fire burning steadily beneath its surface for over half a century is spooky enough all on its own.

Centralia wasn’t officially founded until 1866,  but the area was (of course) active long before then. Native American tribes once lived on the land, although in 1749, the tribes of what’s now Columbia County sold the land that would later become Centralia to colonial settlers; then, in 1793, Revolutionary War hero Robert Morris became the owner of about a third of the land there. Morris went bankrupt in 1798, however, at which point the land came under the purview of the Bank of the United States. From there, it was purchased by a French sea captain, Stephan Girard, who discovered that there were coal deposits in the region.

Weirdly, though, the coal deposits in the area were left alone until the middle of the 19th century. Mining engineer Alexander Rae is largely credited with the development of Centralia as a mining town; a mining engineer, he worked for the Locust Mountain Coal and Iron company, which bought the land — then called Bull’s Head — in 1842. The building of a collier near Bull’s Head combined with the completion of the Mine Run Railroad meant that large-scale coal mining was ready to take off by 1854. Accordingly, Rae moved his family to the area so that he could oversee the mining operations.

That’s when he started to build Centralia into a town: He planned the whole thing out, mapping streets and parceling out land, eventually naming the whole thing Centreville. When he tried to get a post office built in the area, though, he ran into a snag — the United States Postal Service wouldn’t do it, because there was already a Centreville nearby in Schuylkill County. So, he changed the town’s name to Centralia, the post office was granted, and the town was finally incorporated as a borough in 1866.

Despite the many lucrative mines that eventually opened, however, Centralia wasn’t exactly wholesome town. The Molly Maguires were quite active in the area; indeed, Alexander Rae was found murdered in his buggy by three members of the Molly Maguires in 1868. As was frequently the case for mines during this era, working conditions were inhumane, and efforts to organize miners into a union were often fraught with violence. Still, though, at its peak in 1890, Centralia housed a population of 2,761 and had seven churches, five hotels, 27 saloons, two theatres, a bank, a post office, and 14 general stores and groceries.

The early decades of the 20th century, however, were not kind to Centralia. Production declined during the First World War as a result of many miners enlisting to fight, and the stock market crash of 1929 closed five of the area’s mines. Bootleg mining — mining performed illegally on land owned by someone else — became an issue, with pillar-robbing weakening the supports within many idle mines. Most company-run coal mines had shut down by the 1960s.

Then came the fire.

Exactly what started it has been debated, but the widely accepted explanation is this one:

Despite its decline as a coal-producing town, Centralia was still home to around 1,000 residents in the early ‘60s. As such, things like Memorial Day celebrations still regularly occurred. On Sunday, May 27, 1962, the town was gearing up for the festivities scheduled for the following day — preparations which called for the cleanup of a pile of refuse sitting in the town’s landfill. At the time, it was common to dispose of trash by burning it, so that’s what was done to the garbage in the Centralia landfill: It was set on fire.

More than half a century later, that fire is still burning. And it’s the reason the town is all but abandoned now.

The trouble is that the landfill sat on top of one of the town’s many old coal mines — a mine that still, as PopSci notes, had plenty of coal sitting inside of it. In an effort to keep doing what it does best, the fire set in the landfill discovered the coal sitting beneath it, and, well… you can probably guess what happened next. The fire took hold of the mine, not only filling it with soot and heat, but also with gases like carbon monoxide and methane — things that humans really shouldn’t be breathing, and which seeped slowly out of the ground as they filled the space beneath. Ashfall became common, and the town became unliveable. So, too, did nearby Byrnesville, which the fire eventually spread to.

Efforts to put the fire out not only failed, but failed spectacularly; the blaze continued to release toxic substances into the air, as well as open up sinkholes and cause other structural issues. Most of the residents later moved away; after the government determined that further attempts to extinguish the fire were futile, they offered the townspeople compensation for their property and relocated them elsewhere. The houses were mostly razed to the ground — although amazingly, a very small handful of people still live there. After the Commonwealth of Pennsylvania attempted to evict the few who hadn’t left, several of the remaining residents sued for their right to stay; in 2013, they were granted that right.

But the town is, in a word, eerie. The poisonous gases seeping out of the ground have killed much of the vegetation in the area, and the air is still filled with smoke and ash. In fact, it became the inspiration for the version of Silent Hill seen in two film adaptations of the Silent Hill video game franchise — a version supposedly located in West Virginia, where a coal fire burning below the surface of the town resulted in the area becoming abandoned many years ago. (The Silent Hill seen in the games, meanwhile, is meant to be in Maine.)

A new documentary about the town was released earlier in 2017 featuring interviews with former residents and government officials exploring the story of how those who still live there were granted the right to stay; you might have a hard time finding screenings, but if you can locate one, it might be worth checking out. You can also — if you’re feeling adventurous — visit; there are (as far as I know) no “No Trespassing” signs anywhere in the town. Just, y’know… be aware of the fact that it’s somewhat dangerous.

Centralia doesn’t even have a zip code anymore — the Postal Service revoked it in 2002 — so technically, it doesn’t really exist.

The fire is expected to burn for anywhere between 50 and 250 more years.