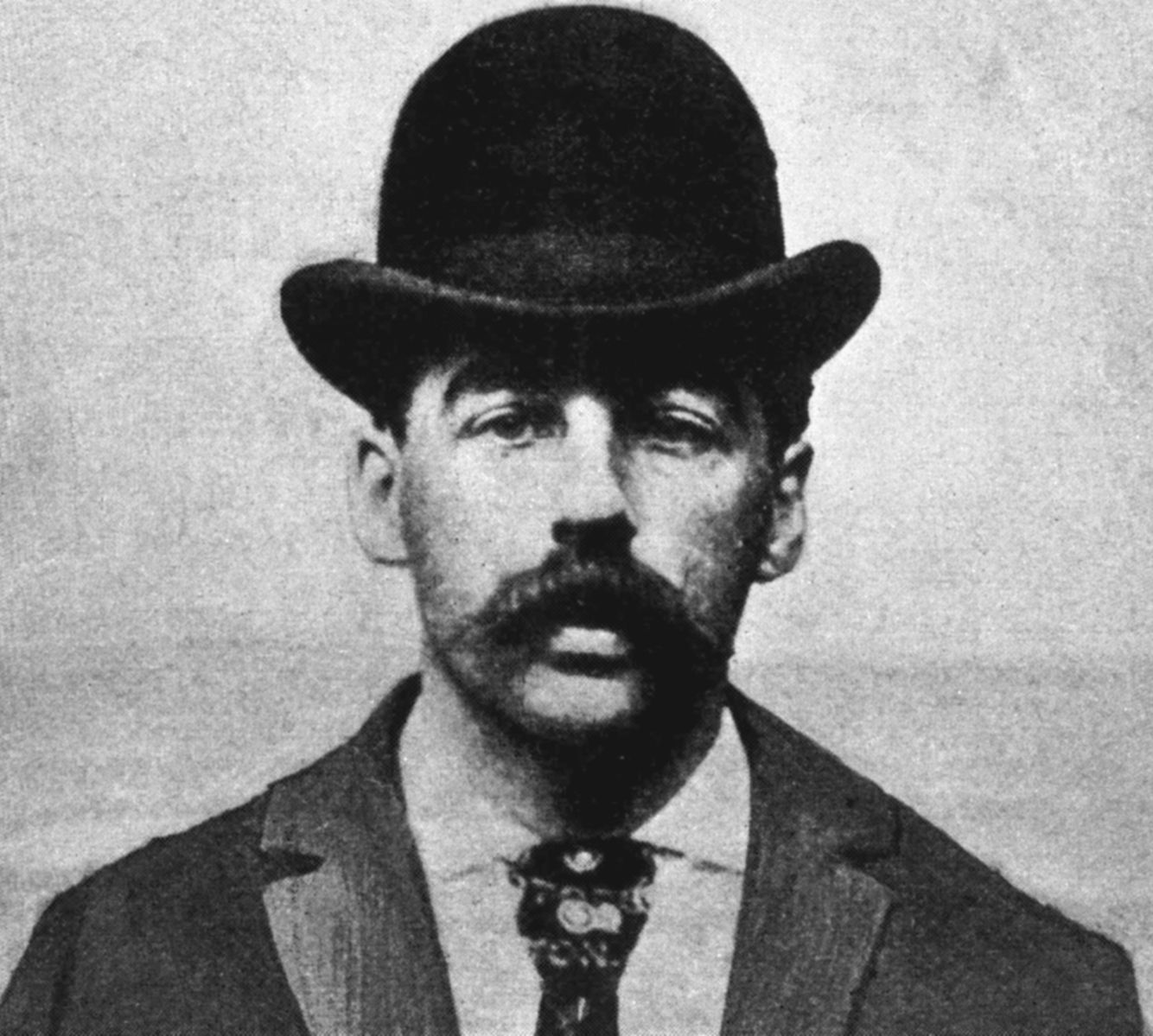 I’m a little late to the party on this one, but it’s too good to pass up, so here we are: A team of researchers is about to exhume the body of H. H. Holmes. Holmes, whose real name was Herman Webster Mudgett, was born in Gilmanton, New Hampshire on May 16, 1861; he would go on to become one of the most notorious serial killers of all time, dispatching his victims in an intricate death trap of a building in Chicago, Ill. known as the “Murder Castle” during the years surrounding the 1893 World’s Fair. Holmes was caught on Nov. 17, 1894 in Boston, Mass., tried in October of 1895 for the murder of Benjamin Pitezel, found guilty and sentenced to death — at which point he confessed to 27 murders, although only nine have been verified — and executed by hanging on May 7, 1896. However, a rumor has persisted for more than a century that Holmes didn’t actually die in 1896 — that he somehow escaped the hangman’s noose, faking his own death and running away to South America. With the exhumation, his descendants are hoping to put the rumor to rest once and for all, and honestly, I can’t blame them. I mean, how bananas must it be to know that you’re related to H. H. Holmes?

Rolling Stone reported on this development not quite two weeks ago, on May 4, 2017 (just a few days before the 101st anniversary of Holmes’ execution date, I couldn’t help but notice), which is how I caught wind of it, although it looks like the story originates from NBC Philadelphia and dates back to the end of April. In 2016, Holmes’ great-grandchildren, John and Richard Mudgett and Cynthia Mudgett Soriano, petitioned the Delaware County Court for the exhumation; the court granted permission for them to proceed on March 9. Once the exhumation occurs, the Anthropology Department at the University of Pennsylvania will perform a DNA analysis to determine whether the remains in the grave do, in fact, belong to Herman Webster Mudgett, AKA “Dr. Henry Howard Holmes.”

Although H. H. Holmes is often referred to as “America’s first serial killer,” that’s actually not strictly accurate. Holmes’ murders occurred primarily between 1891 and 1894, but a number of other killers were active prior to those years. The Servant Girl Annihilator, for example, went on the rampage in Austin, Tx. for a year between December of 1884 and December of 1885; Delphine LaLaurie is believed to have tortured and killed a number of household slaves between 1831 and 1834 in New Orleans; serial killer and cannibal Boone Helm was active in the American West between 1850 and 1864; the Bloody Benders killed at least a dozen travelers who visited their inn and general store in Kansas from 1871 to 1873; Lydia Sherman, known as the Derby Poisoner, poisoned 12 people — three of whom were her husbands and six of whom were her own children — between 1863 and 1877; and, well… you get the picture.

And, of course, robbers, pirates, and highwaymen had been common dangers of the open road for ages by the time Holmes came along: Samuel Green and William Ash were responsible for a huge number of robberies and murders up and down the East Coast between 1817 and 1821; the Harpe brothers, Micajah and Wiley (born Joshua and William) killed at least 39 people — possibly as many as 50 — in Illinois, Tennessee, Kentucky, and Mississippi in the late 18th century; former Revolutionary War militia captain Samuel Ross Mason led a gang of river pirates and highwaymen in the decades following the war around the lower Ohio River and Mississippi River; and so on and so forth.

However, I don’t think any of these prior serial killers went about their murders in quite the same way that Holmes did — or with the same degree of, uh, creativity. Somewhere around 1885  or 1886 — there are some discrepancies surrounding the exact date — Holmes moved to Chicago, found employment at a local pharmacy, took over the business (possibly by dishonest means — he was also a prolific con man), bought an empty lot opposite the pharmacy, and, in 1887, began construction on a two-story building consisting of retail spaces and a new pharmacy on the first floor and apartments on the second. Construction on a third story began in 1892, with Holmes stating that he meant to use the building as a hotel during the 1893 World’s Fair. Construction on the hotel portion was never finished… but plenty of other features throughout the building were.

Small rooms meant for the purposes of torture and murder were rife throughout the place. Gas jets ran through several of them, allowing Holmes to asphyxiate his victims if he so desired; the controls for these jets were located directly in Holmes’ bedroom. Trapdoors and chutes led down to the basement to enable the easy disposal of bodies — once they had arrived at the building’s lowest point, Holmes could either dissect them or burn the remains. He seemed to have a predilection for young women; many who came to the area to see the World’s Fair disappeared, seduced and then killed by Holmes. (Holmes was also a bigamist, having been married to three women simultaneously.) He frequently sold skeletons to medical schools, although no one ever thought to ask him where he had acquired so many specimens — or perhaps simply didn’t wish to know where he had acquired them.

The third floor of the Castle caught fire on Aug. 13, 1893, but when insurance companies began pressing to prosecute Holmes for arson, he fled Chicago, spending the next year in a variety of locations, including Fort Worth, Tx., St. Louis, Mo., and Philadelphia, Pa. It was in Philadelphia that everything began to unravel. Having convinced his business partner, Benjamin Pietzel, to fake his death so they could collect and split the insurance money, Holmes actually killed Pietzel, then manipulated Pietzel’s wife into allowing three of her five children to stay with him. He then killed two of the children, Nellie and Alice, burying their remains in the basement of a building in Toronto — but apparently he didn’t hide them as well as he could have: Nellie’s and Alice’s remains were uncovered by Philadelphia detective Frank Geyer, who, it turned out, had been tracking Holmes.

Geyer followed Holmes to Indianapolis — where Holmes killed the third Pietzel child, Howard — and then to Boston, where Holmes was finally caught. Somewhat hilariously, Holmes was held on an outstanding warrant not for murder, but for horse theft in Texas. From there… well, you can probably figure out how it all went. When you’ve got that many bodies connected with the same person, the lines become easy to draw.

As far as I know, a date hasn’t been set for Holmes’ exhumation yet — and whenever it does happen, it’s likely to be an ordeal: Holmes requested his coffin be encased in cement and buried 10 feet deep out of fear that his grave would be robbed and his body would end up on a dissection table.

The irony here likely escapes no one.

Another fire gutted the Murder Castle in August of 1895, possibly as a result of arson — although whether the goal of the alleged arsonists was to hide further evidence or whether it was to prevent the building from becoming a macabre tourist attraction remains to be seen. The Castle was finally torn down in 1938; the Englewood branch of the United States Postal Service stands on the grounds today.

For more on H. H. Holmes and the Chicago Murder Castle, check out the following:

The Devil in the White City by Erik Larson — First published in 2003, this book is probably how most contemporary readers became familiar with Holmes.

H. Holmes: The True History of the White City Devil by Adam Selzer — more recent than Larson’s book, Selzer’s came out just about a month ago, at the beginning of April 2017. I haven’t read it yet, but word on the street is that it’s good; it tries (and, from what I gather, succeeds) to separate out the exaggerations and myths associated with Holmes’ case and nails down the facts.

“Serial Killer H. H. Holmes’ Body Exhumed: What We Know” by Eric Killelea — the Rolling Stone article I heard about the whole exhumation thing from.

“The Master of the Murder Castle” by John Bartlow Martin — An early history of Holmes, this one dates back to December of 1943, published in Harper’s Magazine. Fascinating for a wide variety of reasons.