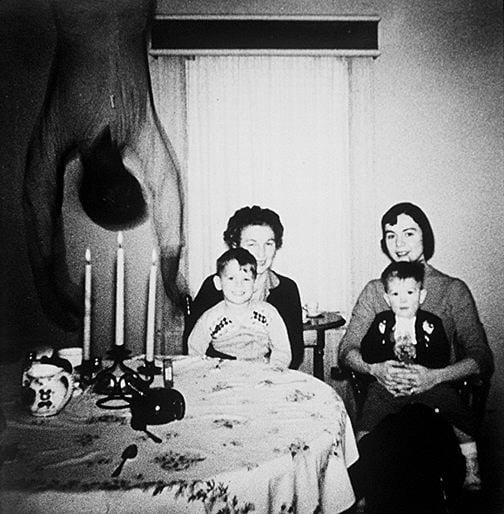 Type: Unclassifiable. MO and EV are the strongest possibilities, although in the absence of further information, a classification is not possible to be made at this time.

Period/location of origin: Conflicting. The photograph itself is believed to date back to 1959, possibly originating in Texas; however, the earliest appearance of Subject 1A (see below) may have occurred solely on the internet circa 2009. Additionally, an anecdote meant to explain Subject 1A may have also appeared solely on the internet, albeit several years later (circa 2012-2013). This anecdote is… questionable.

Appearance: Subject appears to be a black-and-white photograph of two small boys seated at a table in the laps of two women. The women are assumed to be relatives — judging by the apparent ages of each, possibly mother and grandmother. The table is set with a tablecloth, three lit candles, and what looks like a tea set. Above the candles appears to be a humanoid body (Subject 1A), either hanging upside down, or perhaps falling, as subject’s colloquial name suggests. The taker of the photograph is unknown.

Additional notes: The anecdote purporting to explain Subject 1A is as follows: In the 1950s, a family by the name of Cooper purchased a house in Texas. On their first night after moving in, the mother, grandmother, and two children posed for a photograph at the dining room table. The photograph was taken by the father; nothing out of the ordinary occurred at the time. However, when the photograph was developed, Subject 1A appeared. The family was horrified, and the two small children were plagued by nightmares for years after. Exactly who or what Subject 1A might be or how it ended up in the photograph has yet to be explained.

However, this anecdote has been debunked as fiction. One of the two boys, now an adult, stepped forward in 2015 first to note that the family’s name is Copper, not Cooper, and second, to confirm that the original photograph did in fact date back to 1959. At the time, though, it was a simple family photograph, nothing more; Subject 1A was absent at the time of the photograph’s creation. This suggests that subject as it is known today may be a manipulation, with Subject 1A being a later addition. Also in support of this theory are certain elements of subject: Much has been made of the framing (why is the family not centered?) and “vignetting” (the darker edges and brighter center) of the photograph as indications of image manipulation.

Which, of course, prompts a further question: Who — or what — performed the manipulation?

The first known appearance of subject in its manipulated form is believed to have occurred on Nov. 14, 2009, the date of an upload to the website ligotti.net. The posting is titled simply, “Family Gathering”; the file name is “1_familywithhangingman.jpg.”

However, researchers have been unable to determine the source of this form of subject. The uploader of “Family Gathering” was discovered to have nothing to do with the manipulation, and no other possible answers have been forthcoming. Also unknown is who or what may be responsible for creating and spreading the fictional anecdote “explaining” Subject 1A, or to what end this creation and spread was undertaken.

Next to nothing is known about Subject 1A other than that, at first, it was not present, and then, sud­denly, it was.

Perhaps the responsible party is Subject 1A itself.

But perhaps some things are better left unknown.

The Cooper Falling Body Photograph on Short On Content.