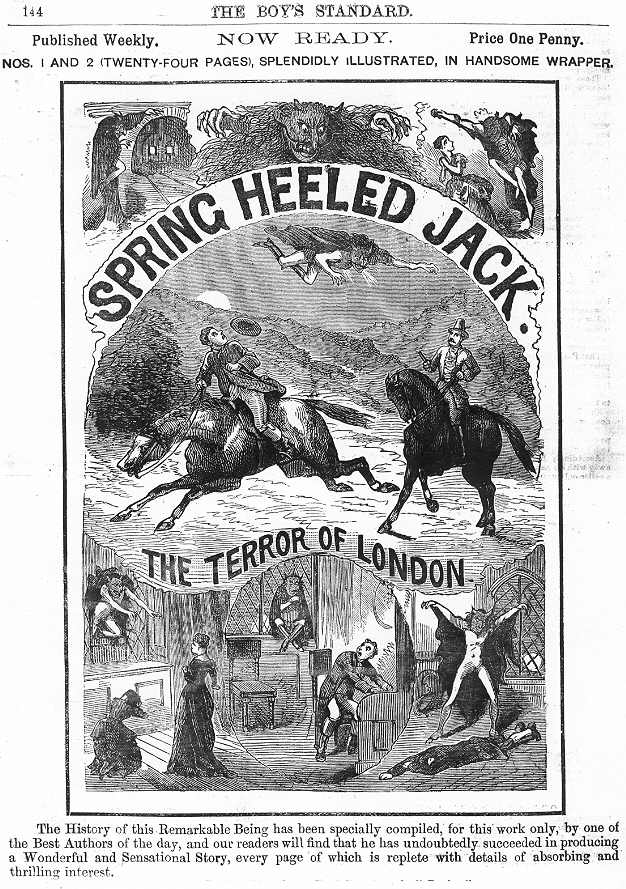 Appearance: Subject’s appearance varies by report; however, frequently cited characteristics include a goatee, pointed ears, horns, and glowing, red eyes. Subject is also often said to have talons, rather than fingers (talons may or may not be organic; some reports cite them as being metallic), and is sometimes described as being clad in white oilskin and/or a black cloak. Subject may or may not have the ability to breathe white and blue flames. For all intents and purposes, subject appears to be the quintessential “devil.”

Interestingly, several reports describe as tall, thin, and gentleman-like. Subject’s relationship to the PE known as “the Slender Man,” if any, remains unknown.

Modus operandi: Subject is known for its ability to leap extraordinary heights — perhaps as high as 20 to 30 feet, without a running start. This ability has allowed subject to escape capture time and time again after carrying out its attacks. In terms of targets, subject appears to favor women, grasping at them, tearing at them, and in many cases destroying their clothing. Subject has also shown itself to be intelligent, using subterfuge and disguises to trick targets into drawing near.

Subject’s goal is unknown, although researchers have hazard… educated guesses based on subject’s preoccupation with tearing targets’ clothing to shreds.

Additional notes: Earliest known documentation of subject occurred in December of 1837. Articles in London newspapers at the time described the appearance of a “ghost, imp, or devil” similar to “a large white bull” in the village of Barnes, south and west of London, during September of that year; said “ghost, imp, or devil” had carried out a number of attacks, many against women. Media began referring to subject as “Spring-heeled Jack,” “Jack” presumably as an “everyman” sort of name (the moniker was a nickname for the commonly encountered “John”), and “Spring-heeled” for its remarkable physical abilities. Subject was a popular topic for “penny dreadfuls” of the era.

Reports from all over the country soon followed, with the appearance of a “large white bull” gradually giving way to that of a more humanoid creature. Two of the highest profile reports came from two women, Jane Alsop and Lucy Scales, in February of 1838. Alsop’s report is perhaps the more concerning of the two, due to the deviousness of subject in carrying out the attack: Alsop described answering the door to someone claiming to be a police officer who said he had captured subject nearby. Upon being provided with a candle, however, the “police officer” revealed himself to be none other than subject itself. Subject proceeded to physically attack Alsop, who was rescued by her sisters; subject then fled on foot.

Subject’s last confirmed appearance occurred in Liverpool in September of 1904; however, it was not until 1967 that a complete account of this occurrence appeared in print (via the Liverpool Daily Post). Account reads as follows:

“In September, 1904, the Springing terror made his last appearance, this time in William Henry Street, when hundreds of local folk watched in awe as the pathetic creature leaped up and down the length of the Everton Street. After more than 10 minutes of leaps which would embarrass present day Olympic high jumpers (and pole vaulters, too), he was seen to jump clean over the terraced houses from Stitt Street to Haigh Street, and then hop back across the slate roofs to Salisbury Street, after which he was never seen again.”

It has not been determined whether accounts as recent as 2012 herald the return of subject.