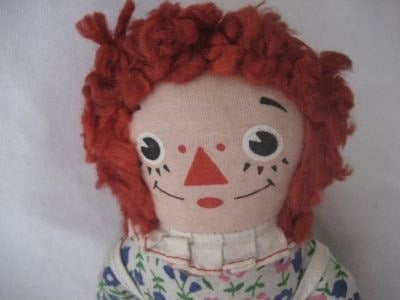 Previously: The Salt and Pepper Lady.

Period/location of origin: Unknown, although subject surfaced as an antique in a hobby store in 1970.

Appearance: Subject appears to be an antique Raggedy Ann doll with red yarn hair, a floral dress, a white pinafore and bloomers, and red and white striped stockings — not, as is commonly believed, a porcelain doll. Raggedy Ann dolls have been produced in the United States by various different toy companies since 1920; it is unknown which version subject may be, although subject’s details — namely the facial features and the dress — suggest it may be a Georgene Novelties creation from the 1940s or 1950s.

Modus operandi: Subject will first search for a suitable target. Upon acquiring said target, subject will then attempt to gain entry to target’s home by presenting itself as a desirable object, perhaps worthy of gift-giving.

Once subject has gained entry to a target’s home, subject will activate. Subject may be found to move or change position of its own accord, sometimes traveling many rooms away from its last known location. Subject may also attempt to communicate via writing; messages written on parchment paper imploring target to “help us” may be found in target’s home, regardless as to whether target keeps parchment paper in the house.

Subject may attempt to pass itself off as the spirit of a young girl who died at a tragically young age. Should subject deploy this strategy, targets should exercise both caution and skepticism; subject is not what it appears to be.

Subject may also periodically appear to “bleed” from the backs of its hands and its chest, as in stigmata, although what precisely the red substance may be and from whence it may come has not yet been determined.

Subject will react poorly to attempts by others to come between itself and its primary target. In extreme instances, subject may attempt to claw, suffocate, or otherwise harm those determined to be interfering with subject’s achievement of its goal.

Subject’s goal is assumed to be the possession of a human host. To what end remains unknown.

Containment: Subject is currently incarcerated in a locked case in the Warren’s Occult Museum in Monroe, Connecticut. Subject may be safely viewed, although targets would do well to obey the sign pinned to the case reading, “WARNING: Positively do not open.”

Additional notes: Subject’s first known appearance occurred in 1970, when subject was acquired second-hand via a hobby shop and gifted to a 28-year-old nursing student for her birthday. Although the nursing student — henceforth referred to as “target” — was initially pleased with the gift, she and her roommate soon began to notice subject behaving strangely (see: Modus operandi). After subject displayed the stigmata effect, target and target’s roommate sought help from a medium.

The medium informed them that the doll was inhabited by the spirit of one Annabelle Higgins, a young girl who had been found dead at the age of seven on the property now occupied by target’s apartment complex. Target and target’s roommate were touched when “Annabelle” told them that “she” felt safe and loved with them and wanted to stay. Target and target’s roommate subsequently gave “Annabelle” permission to continue to inhabit the doll.

However, after subject twice attacked a friend of target and target’s roommate — once via strangulation and once by clawing his chest — target began to accept that subject may not be what “she” had seemed. Target first contact a priest, who subsequently reached out to paranormal investigators Ed and Lorraine Warren. The Warrens determined subject to be not possessed by a human spirit, but manipulated by an inhuman presence. An exorcism was carried out, and the Warrens transported subject to their home base in Monroe, Connecticut. Subject remains under lock and key.

A heavily fictionalized account of subject and subject’s history appeared in the 2014 film Annabelle.

Recommendation: Do not attempt to remove subject, and do not challenge subject.