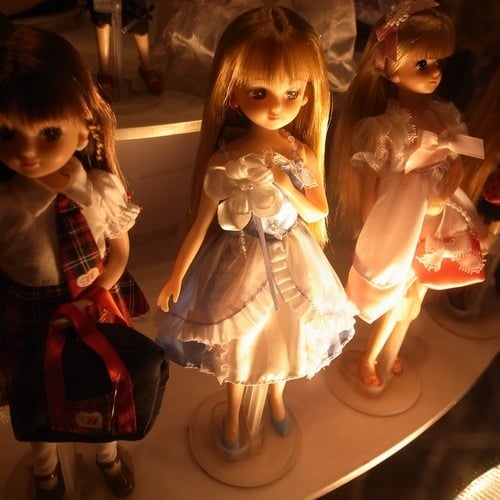 Appearance: Subject appears to be a fashion doll of the type known in Japan as Rika-chan or Licca-chan. Subject measures eight inches in height, and may be blonde, brunette, redheaded, or adorned with any other of a number of possible hair colors. Like Barbie in the United States, subject may hold a variety of different jobs and practice a huge number of hobbies; the fact that subject’s fictional biography states that she is 11 years old seems to have no bearing on the occupations in which she may engage.

Subject is most notable for having not two legs, as is standard in commercial Licca-chan dolls, but rather three instead. The third leg may or may not be an unusual color or made of questionable materials.

Modus operandi: Subject may be present in a variety of different scenarios and may behave towards target accordingly. These scenarios include, but are not limited to, the following possibilities:

If subject is encountered on the floor of a public restroom:

Subject’s third leg will appear purple. Subject may or may not turn its head to face target of its own accord; should this event occur, subject may open its mouth and speak the words, “My name is Licca-chan and I’m cursed. I’m cursed. I’m cursed.” Upon leaving the restroom, target may now find subject’s words inescapable: Target may hear the words whispered constantly in his or her ear; target may answer a ringing telephone and hear the words spoken down the line; target may wake from uneasy sleep with the words echoing in his or her brain; and so on and so forth. Subject’s ultimate goal is to cause target to destroy his or her own eardrums in an effort to escape the sound of the words.

If subject is encountered in the toilet of a public restroom:

Subject’s third leg will appear purple. Subject may encourage target to flush it down the toilet; should target do so, target may then be involved in a traumatic accident resulting in the amputation of at least one leg. During recovery, target may discover a new leg growing in the spot previously occupied by target’s natural leg; the new leg will be the same shade of purple as subject’s third leg. Target may then inexplicably sicken and die, presumably due to the presence of the new leg. The methods by which subject may or may not cause the accident, the amputation, and the growth of the new leg remain unknown.

If subject’s third leg is formed out of human flesh:

Subject will inform target that it is looking for the owner of the leg. What subject may do to target should target respond remains unknown.

If subject wishes to play hide and seek:

Subject will sever target’s legs with a large, sharp knife before target has a chance to hide.

If subject is discarded by a former owner:

Note: The third leg is NOT a requirement for this scenario to occur.

Additional notes: The earliest indication of subject’s hostile nature occurred when Takara Tomy, which manufactures Licca-chan dolls, set up a promotional telephone line for the product. Children could call the phone line to “speak” to Licca-chan — that is, to hear a recorded message purportedly from the doll herself. However, some reported hearing not the standard Licca-chan greeting upon dialing the number, but rather a selection of disturbing phrases like “I am coming to your house to kill you.”

Subject’s three-legged variation may have been the result of a factory defect. Upon discovering the alleged error, Takara Tomy reportedly recalled all the dolls with additional limbs; some, however, were not recovered before they were sold to members of the public. It should be noted that this story has not been confirmed and should not be treated as fact.