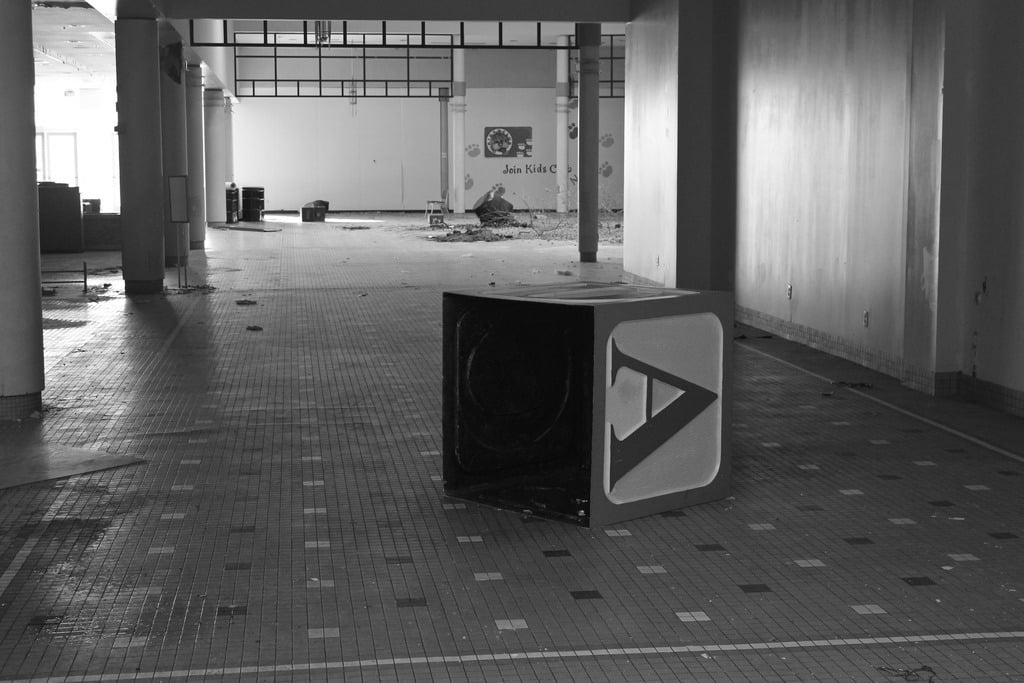 Although it will be December by the time any of you read this post, it’s Black Friday as I write it. I’m not shopping; I dislike large crowds already, but the insanity of Black Friday flat-out terrifies me. I feel like it showcases the worst, pettiest side of humanity: People punching, kicking, trampling, and sometimes even killing other people, all for the sake of a 50 percent off deal or buy one, get one gimmick. I don’t care how good the “deal” is (and it’s often not even that good to begin with); no flat screen television or hot new toy is worth another person’s well-being.

So with that in mind, let’s talk about dead malls.

As of September of 2014, there are approximately 1,200 indoor malls in the United States — but only about 400 of them are actually thriving. The rest of them are dying, a result of both the economic climate and the changing habits of shoppers. It’s not a merciful death; often right up until the very end, there’s hope that sometime will turn around, that a new development is planned, that something will arrive to save the whole thing. It’s also crushingly, overwhelmingly symbolic.

The death of a mall usually begins with the loss of its anchor store: A clothing retailer like Nordstrom, a department store like Macy’s, or some other large chain shopping destination. When the anchor store departs, it literally leaves a gaping hole in the mall’s fabric; left vacant, the sizable storefront it once occupied sometimes earns the name “ghostbox.” Traffic starts to decline once the anchor store no longer functions as the mall’s primary draw, which means traffic also declines for smaller retailers. The smaller retailers in turn begin to close as business dries up, one by one, like a row of dominoes falling one after the other — and when the last one drops, the death is complete. The stores close up shop, and the building is left empty. Sometimes they’re repurposed for things like offices or medical centers; sometimes they’re taken over by squatters; sometimes they’re bulldozed over; and sometimes they’re simply reclaimed by nature.

I’m by no means anti-materialist; I like my creature comforts, and I live in relatively cushy surroundings. I don’t, however, have a tendency to accumulate huge collections of things I don’t really need. Part of the reason why is practical: I make what I need to pay my bills along with a little extra, but like most creative types in our current economy, I’ve long since squared with the fact that money will likely always be tight. It’s a simple equation; I don’t spend what I don’t have. But part of it is also philosophical, a view put into sharp relief by all these dead malls: Things are just that — things. If you put too much stock in them, they’ll leave you as hollow as the malls are after all their residents have packed up and left.

The zombie trope may be a little overdone at this point, but there’s a reason they consistently strike such a chord with us: They pretty much always serve as a metaphor for something troublesome in our own society. What they represent might change from time to time — and sometimes, it’s not even the zombie that are important, but rather how human beings respond to the threat of them — but one metaphor that continues to ring true, no matter how much time has passed, is the one presented by George Romero’s 1978 classic Dawn of the Dead. There’s a reason it (and derivatives of it, like the Dead Rising video game series) takes place primarily in a mall; in this setting, zombies become the ultimate consumers, blindly, mindlessly, and literally choking down everything in their path in an effort to get more, more, more...

…But in the end, it’s mostly empty calories.