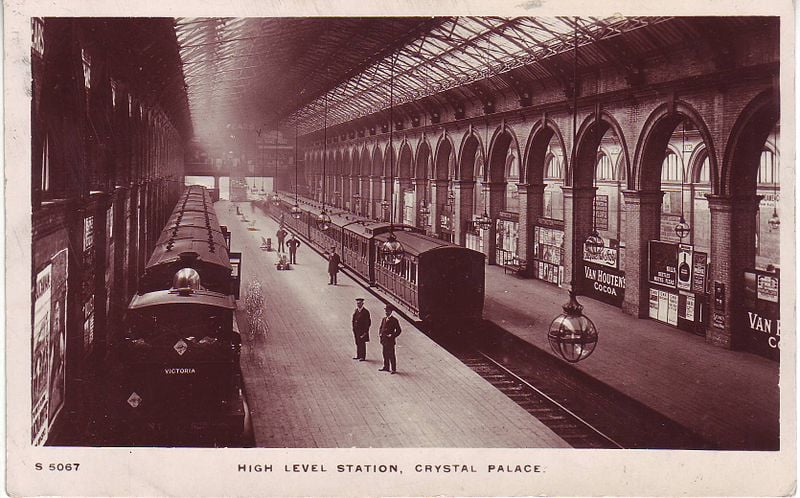 Period/location of origin: 1865, London, the United Kingdom of Great Britain.

Appearance: Subject appears to be a disused railway station on the west side of Crystal Palace Parade in the south London borough of Southwark. At its height of operation, it was an outstanding example of Victorian architecture; red and terra cotta brick walls supported a glass and iron train shed roof, with square towers topped with short spires marking each corner. Brick arches divided the station’s interior, and a passenger concourse above the tracks hosted refreshment rooms, waiting areas, and a booking office.

Subject has been closed to the public since 1954 and is now securely gated on both sides. The majority of the station was demolished in 1961; its only remains are the high retaining wall on the west side of Crystal Palace Parade, the vaulted subway beneath the road, and the concourse at the east end of the subway (now roofless). Bricked up entrances to the station be seen in the wall on the west side.

Modus operandi: Subject is notable for its connection with various rumors dating back to the 1930s. A story popular with local schoolchildren claims subject was shut down due to the presence of a commuter train trapped in the tunnels by a collapse. According to the story, the train was unable to be extracted; neither was it possible to retrieve its passengers. The station is said to have been walled up upon discovery that rescue was impossible, leaving scores of souls entombed in the collapsed tunnel. They are said to have remained there ever since.

An additional story claims that a woman found the collapsed tunnel in 1978 and saw within it an old railway carriage filled with skeletons clad in decaying Victorian dress. Attempts to relocate the tunnel were unsuccessful.

Both stories have yet to be confirmed, although the persistence of the rumors is somewhat troubling.

Containment: Subject is kept locked and gated, although occasionally its remains are opened to the public. Subject is considered safe to visit in supervised situations.

Additional notes: Subject was initially built to serve the site of the Great Exhibition of 1851 in London. Designed by noted architect Edward Middleton Berry, it cost £100,000 to build; its line was one of the first South Eastern and Chatham Railways to be electrified by Southern Railway. The Crystal Palace itself was tragically destroyed by a fire in 1936, at which point traffic to subject declined. The railway line sustained further damage during the Second World War; although temporary repairs were made and the line opened once again, steadily declining traffic and the need for heavy reconstruction lead to subject’s closure in 1961.

Recommendation: Further research required, re: persistence of rumors and legends.

The Great Exhibition of 1851 and Its Legacy.

From the Catalogue of the Pavilion of the Uncanny and Marvellous, Scheduled for Premiere at the Great Exhibition (Before the Fire).