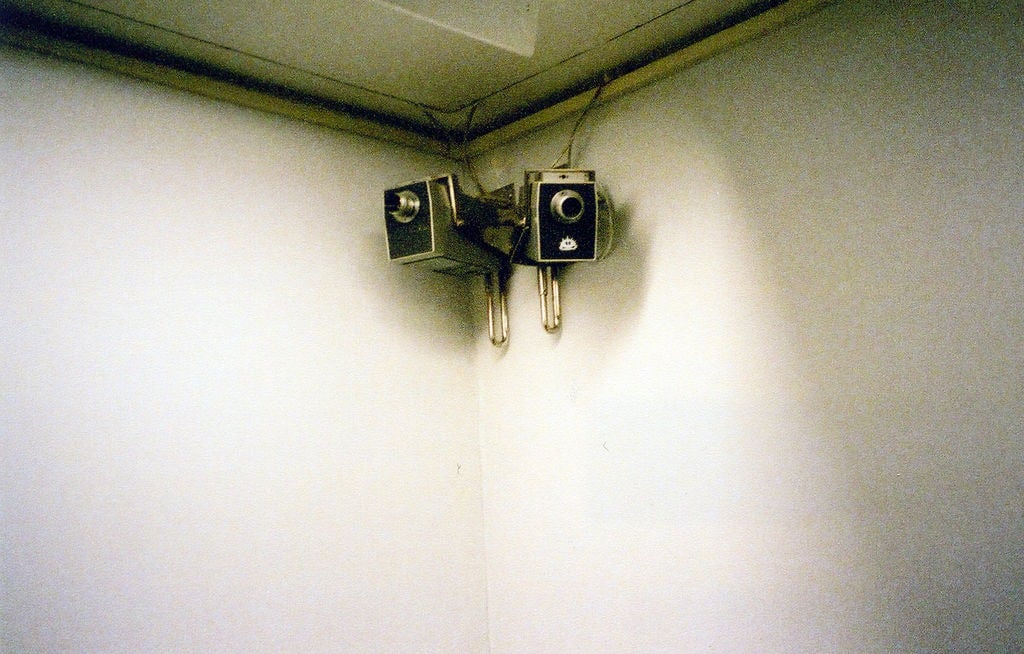 I debated filing “The Strangest Security Tape I’ve Ever Seen” under “Creepypasta of the Week,” as technically I’m not sure that it actually qualifies as creepypasta. It is, however, a cracking good story, and wonderfully written to boot; as such, I think it’s worth sharing. And anyway, since its inception roughly a year ago on the nosleep subreddit (it’s written by a fellow who goes by the moniker powerhawkmash), it’s made its way into the archives of Creepypasta.wikia – so there you go. Justification for including it here.

I’m lucky enough never to have had to work a job like this one, but if I ever find myself behind the register at a gas station, you can be damn sure I’ll be keeping an eye on those security tapes.

I work at a gas station in rural Pennsylvania. It’s a boring job, but it’s pretty easy and it pays all right. A few weeks ago, this new guy started; I’ll call him Jeremy.

Jeremy is weird. He’s about 25 or 26, and he hardly speaks, but he’s got the creepiest laugh I’ve ever heard. My boss and I have both noticed this, but it’s never been a problem, so there’s not much we can do about it. Customers have never complained about him, and he’s always done his job fairly well. Up until a few weeks ago, anyway—that’s when things started going missing. Employee theft can be a problem at any business that sells consumer goods, and there’s only one person working at a time at this gas station (it’s a pretty small place). About two weeks ago, my boss started noticing that we were short on motor oil. At first, it was a few containers at a time, then entire shelves and boxes from the back room. Pretty soon entire shipments would be gone the day after we got them, and it would always be right after Jeremy’s shifts. My boss has checked the security camera tapes from every single night he worked, but he could never catch him in the act. Jeremy would lock up at closing, then the motor oil would be gone the next day.

My boss usually takes the tapes home with him to try and catch Jeremy stealing, but his daughter had a softball game last night, so he asked me to watch the tape for him. He offered to pay me overtime, under-the-table, so obviously I took that offer. There are three cameras, so he gave me three different tapes to check. I figured it would be a long night, but I’m trying to save up for vacation, so I really needed the money. I took the tapes home, popped them in an old VCR and sat back.

Two days ago (the last time he worked), Jeremy started at 4 PM. Everything seemed pretty normal at first. He counted up his drawer, switched off with the girl who was working before him, and waited for a customer. The first person who came in was Mrs. Templeton (the timestamp on the video read 4:03), a regular. She picked up her cigarettes and a newspaper, and paid with a twenty. Nothing unusual there. The next customer was some local guy named Ron. He drives a motorcycle, usually comes in every few days. He filled up his tank, got a bag of beef jerky, paid with his credit card, and then left. Next was some guy with a cowboy hat. I’d never seen him before, but we get plenty of strangers passing through, just like at any gas station. He got forty dollars worth of diesel fuel, paid with a hundred dollar bill, and went on his way. I sat back and sighed. The only thing more boring than doing this job is watching someone else do it.

My boss’s offer was enough to keep me watching though, so I left the tape on. Everything seemed pretty normal. I had a feeling that if Jeremy was stealing motor oil, he knew we were suspicious of him by now. I didn’t expect him to be dumb enough to let us catch him on camera. Things stayed boring and routine until about five o’clock.

At 5:03, Mrs. Templeton came back in; she must have forgotten something. But she didn’t. She bought the same pack of cigarettes as before, and the same newspaper. She paid with another twenty. That’s odd, I thought, but then again, she’s a little absent minded. I thought Jeremy should have told her she already got her smokes, but it’s not against the rules to sell somebody the same thing twice. That’s when Ron came in again. He bought another tank of gas (for his motorcycle again—I later checked the outdoor camera because I thought maybe he had another car he wanted to fill up) and the same pack of beef jerky. He paid with his credit card again.

No big deal, I figured this was just a weird coincidence. Mrs. Templeton is forgetful and Ron probably owns more than one Harley. That’s when the guy in the cowboy hat came back in. I felt a chill run down my spine. “Don’t get diesel, don’t get diesel,” I found myself whispering to my empty living room…but he did. He got forty dollars worth of diesel fuel and paid with another hundred dollar bill. Every move he made was identical to his first visit, right down to the way he scratched his nose before he walked out. Either this guy is rich, owns a lot of trucks, and just moved into town, or something really bizarre was happening. I kept watching.

Every customer for the next hour was the same as before. Every single one. I was seriously freaked out, and then at 6:03, Mrs. Templeton walked back in. She bought her cigarettes and newspaper again, and paid with a twenty again. I thought I was going to lose it. I only watched another half hour before I started fast forwarding through the rest. It was all the same. Every customer would come in at the exact same times, exactly one hour apart.

Now I know what you’re thinking. That sneaky motherfucker Jeremy had messed with the tapes. He had run a loop of his first hour of business over and over. That wasn’t the case. There are windows around the cash register area that the camera covers, and I watched the sunlight fade as time ran on. Jeremy’s routine didn’t loop over—he swept, mopped, restocked, and did all his duties exactly how you would expect. But the same customers kept coming in.

I was panicking at this point. Something was seriously wrong with what I was seeing, and I had no explanation for it. I skipped ahead to when he locked up and walked out to his car. He hadn’t stolen anything, but I kept watching, just to make sure. I fast forwarded one last time, to about midnight.