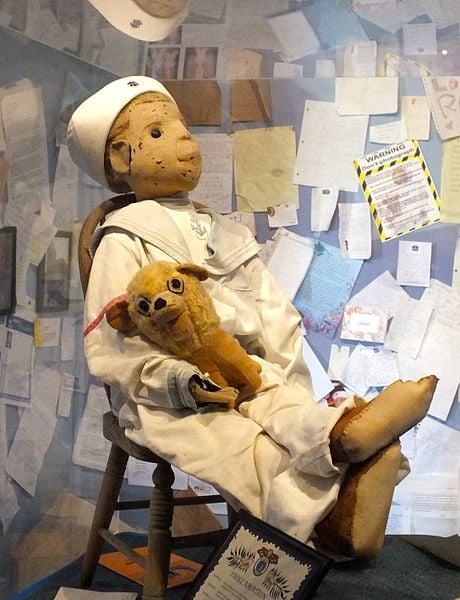 Previously on Scare Yourself Silly: The Curious Case of the Himuro Mansion.

I covered Robert the Doll here on The Ghost in My Machine in a slightly different form about a month ago. What I didn’t address in his Encyclopaedia entry, however, is why I think he’s so damn freaky. This edition of Scare Yourself Silly, written (as always) for the wonderful website The Toast, is an attempt to explain Robert’s particular brand of weirdness.

I’m not sure how I first stumbled upon the story of Robert the Doll; it likely occurred during a night of Wikipedia-hopping, a pastime to which I have lost more hours than I care to admit (although it has enabled me to shore up a store of weird and wacky trivia, so at least there’s that). Although Robert’s Wikipedia entry is relatively short, it was bizarre enough to inspire me to do a little more digging; I stupidly did said digging at night alone in my apartment – and no, I don’t know why I keep doing that to myself – but here are the facts:

Robert made his first appearance in Key West, Florida in 1904, when he was given to future painter Robert Eugene Otto by his family’s Bahamian maid. The four-year-old boy went by the name “Gene”; it’s believed he named his newfound friend “Robert” after himself. Some sources claim that the maid not only practiced black magic and voodoo, but also had it in for the family, implying that she cursed the doll before giving it to the child. However, I strongly suspect this little embellishment to be the result of racial prejudices of the time and therefore not quite true (something with which I’m sure Bahamians and actual practitioners of the religion of Vodun would agree).

Gene and Robert became inseparable. The child carried the doll with him everywhere; at the same time, reports of odd occurrences began filtering out of the big Victorian house in which the Ottos lived. All of the stories related earlier are true: Gene’s parents did hear their son carrying out full conversations with Robert; the child did at one point awake screaming in the middle ofthe night with the doll beside him and the furniture overturned; Gene did frequently blame broken things and temper tantrums on Robert; and passersby did claim to see Robert moving from window to window from the street – even after he was relegated to the attic. Gene’s wife, Annie, loathed the doll and attempted to shut him away a second time; rumor has it that she lost her mind and passed away as a result, although these claims are unsubstantiated.

After Gene passed away in 1974, the Otto home was purchased by a woman named Myrtle Reuter – and Robert came with it. She grew fond of the doll, even going so far as to take him with her when she moved six years later. Even so, she claimed he had a habit of moving around the house on his own; by 1994, she had apparently had enough of him and donated him to the Fort East Martello Museum. He’s on display there now, surrounded by a glass case. Electronics tend to malfunction in his presence, and if you’re going to photograph him, it’s best to ask his permission to do so first. Bad luck has been known to follow those who don’t.

Whether or not you believe the stories – I’m skeptical, but they make damn fine campfire tales, don’t they? – it’s hard to deny their draw. Dolls are pretty freaky all on their own, and when you add in the potential for them to have minds of their own… well, you get the idea. But why are dolls like Robert so creepy? I don’t think it’s just pediophobia (or fear of dolls); I think it taps into something more deeply rooted in psyches called the uncanny valley.