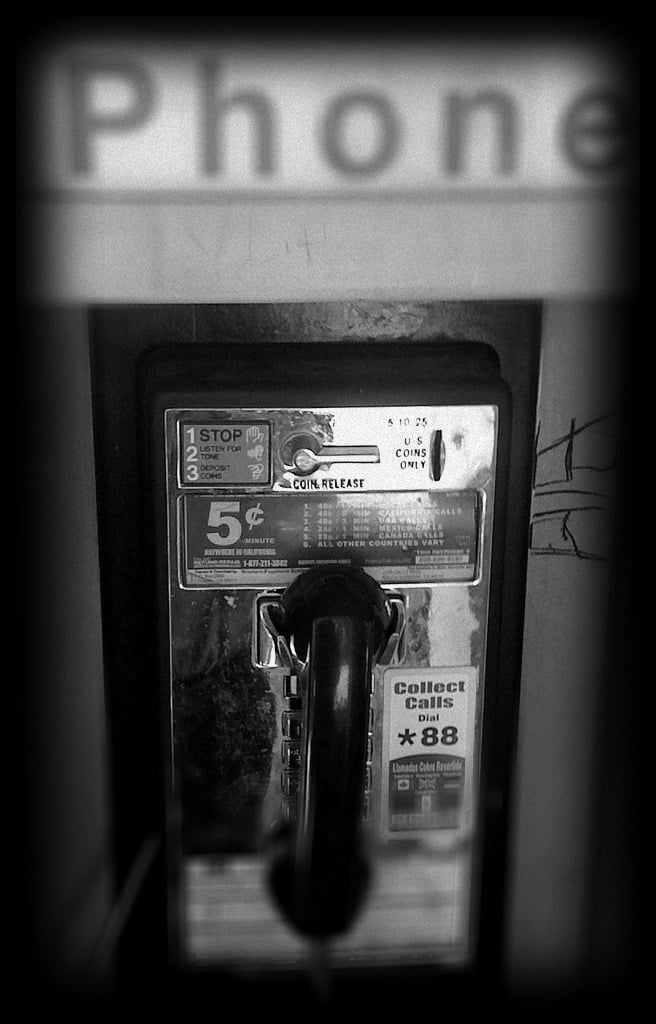 From an unfinished manuscript found in a dumpster outside a diner in southern New Jersey:

The one that shouldn’t ring. The old payphone hung high up above the back door, high enough that you’d need a ladder to get to it. The disconnected one, the one that’s NEVER been connected, not in the entire time it has graced Sal’s with its ancient, boxy, coin-operated presence.

It rang. Again. And this time, I almost answered it.

I stopped myself just in time. It’s just as well, since Sal probably wouldn’t have liked it too much if I’d gone and hauled the ladder out of the storage closet and set it up over the family of four unlucky enough to have been seated at the table by the back door. ESPECIALLY not because of that phone – I’ve had a hard enough time with her about it as it is.

The first time it rang, I actually picked up the phone by the kitchen, thinking someone was calling in an order. The ringing kept going after I picked it up, though, and there was a dial tone in my ear anyway, so I figured maybe I just hadn’t gotten enough sleep or something and shook my head a few times to clear the cobwebs out.

The second time, I had conked out for about ten hours the night before, so I knew it wasn’t the mad ravings of a sleep-deprived mind. No one else looked up when the BRRRRRRRRRRRRRRRING! noise cut through the clatter of the kitchen, though, which kind of wigged me out.  The only other phone in the joint besides the one by the kitchen is that payphone, and I didn’t think it was capable of ringing; maybe it was, though, and someone had managed to call up the number for it as a prank? Ha ha, very funny, funny? I asked around the kitchen to see if anyone knew what the deal with it was – how long it had been there and so on – but everyone just kind of shrugged and said that as far as they knew, it had always been there, and no, they’d never heard it ring, not once. Sal started giving me the stinkeye then, so I stopped my chattering and got back to chopping tomatoes.

The third time it rang, Sal told me shut up about it, no one CARESabout the goddamn phone, it’s DISCONNECTED, it’s always BEEN disconnected, there’s not even a PHONE hookup there, one more mention of it and she’d give me my WALKING papers, thank you very MUCH.

I shut up about it.

I wanted to call Rachel, to tell her about the phantom phone ring, to see if she might be able to see if she might be able to use her famous powers of intuition to puzzle out a plausible explanation for me – but that would require having access to a phone of my own, and I got rid of my cell after that third incident with the not-ringing payphone. It creeped me out too much to keep it around. Besides, there’s a reason I don’t talk to Rachel anymore. Or Steve, or Brian, or any of them. Not after what happened.

I don’t know. All I know is that it might not be safe here anymore. I don’t really want to have to pack up my truck again, but I can’t see any alternatives. It’s only a matter of time until that payphone’s receiver gets knocked off its cradle, whether deliberately or by accident, and I definitely don’t want to be around when it comes clattering to the floor.

I don’t know what might happen if it gets picked up.

Do us a favor and don’t reproduce this without permission, yes? Much obliged! -Lucia Peters