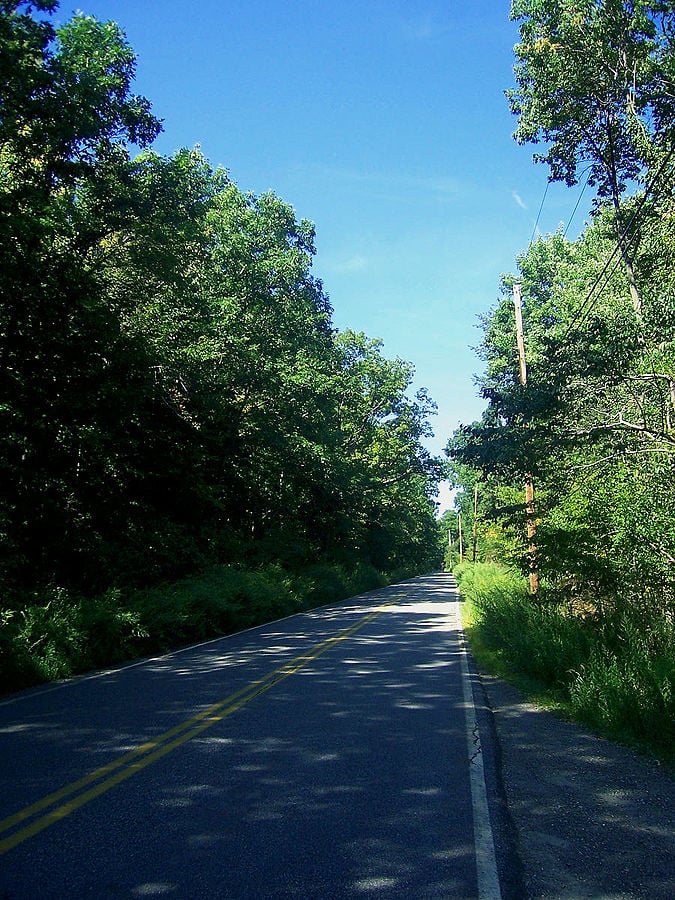 In the town of West Milford, New Jersey, there is a road off of Route 23 that few venture down if they can help it. Poorly paved, full of treacherous curves, and nested deep within the woods with few houses or lights, its official name is Clinton Road. To those who have experienced it, however, it is known as the scariest road in America.

The road gets its name from the settlement of Clinton, located where the road crosses a brook in the area… Or at least, that’s where it was before it vanished. With such a history, it’s no wonder it’s developed a reputation; indeed, there are so many legends associated with Clinton Road that it’s hard to believe a mere 10 miles could house so many spooks.

Where to begin? Perhaps here: 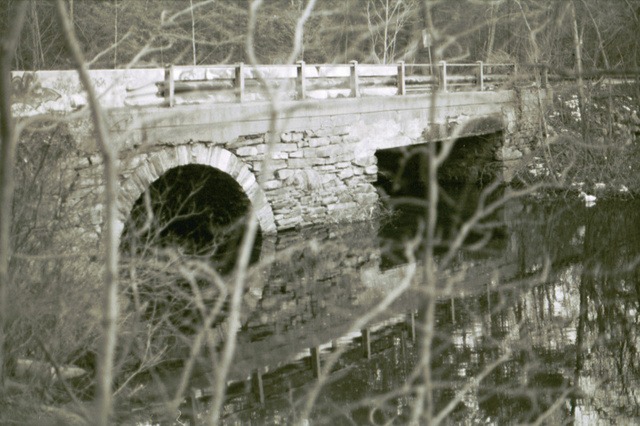 Like many allegedly haunted roads, Clinton Road has a Dead Man’s Curve – a stretch of road with a curve so steep it becomes known for the number of lives it has claimed. Clinton Road’s Dead Man’s Curve passes over a bridge; it’s said that if you travel down it at midnight, stop, and throw a coin from the bridge into the river running beneath it, the coin will be tossed right back at you, returned by the ghost of a boy who died on the perilous stretch.

Southeast of the reservoir stands a stone structure. Conical in shape, it is believed to have been a Druidic temple; however, the Druids who allegedly practiced there were far from the nature-loving sort most imagine they would have been. Rumors of human sacrifice and other awful occurrences cling to the site, and it is believed that horrible things might happen to any intruders who looked too closely at it or visited it at the wrong time.

Although only the foundations remain now, there was once a castle in the woods off of Clinton Road. Built in 1905 by a man called Richard J. Cross for his family, it was named after the mountain range it sat in: Bearfort. But Cross died in 1917, and the property passed into the hands of the City of Newark in 1919. The mansion, which became known as Cross Castle, was later largely consumed by fire; the remaining ruins and their stone walls, however, became known as a hotspot for Satanic rituals. The walls have since been knocked down, but some say a palpable sense of evil still hangs about the place.

In 1972, Warner Brothers opened a theme park in West Milford called Jungle Habitat. A sort of precursor to the Six Flags Wild Safari park that would open along with Six Flags Great Adventure in 1974, it featured a drive-through safari that was home to some 1,500 animals. Problems plagued the park, however, with issues ranging from fear of animals escaping to reports of animals stricken by tuberculosis and subsequently euthanized. Although Warner Brothers planned to expand the park in 1976, it instead closed its doors forever, leaving abandoned structures and – maybe – abandoned animals in its wake. Left to their own devices, these animals may have managed not only to survive, but to breed as well. Watch yourself in the woods surrounding Clinton Road – who knows what sorts of hybrids roam there now.

Or perhaps, finally, here, which may just be the strangest story of all:

In May of 1983, a bicyclist riding down Clinton Road spotted a bunch of vultures gnawing at something in the woods. Apparently people who want to tempt fate enough to go bicycling down Clinton Road alone also like to investigate strange occurrences in the woods, because that is what our lone bicyclist did. What did he discover? That the vultures were feasting on a human body.

Odder than that, though, was what the autopsy revealed: Ice crystals were found in the blood vessels near the dead man’s heart, and the internal organs had decayed at a slower rate than its skin. The conclusion: Whoever had killed the man had frozen the body after the deed was done to disguise the time of death.

The deceased was eventually identified as Daniel Deppner, a small-time crook who ran auto theft scams with two other men. The discovery led to an investigation, which in turn led to the arrest of one of those two men: Richard Kuklinski. A veteran hit man for the Mafia, Kuklinski claimed to have killed over a hundred people, one of whom was Gary Smith, the third man of their three-man crime racket; he treated each of the bodies in same fashion, earning him the nickname “The Iceman.”

The “Druidic temple” is actually the remains of an iron smelter, a relic of a time when the area was rich in ore. There is no evidence of the ghost boy’s identity or what may have befallen him – and the bridge is about to be remodeled, anyway. The castle is real, although the Satanic rituals carried out that are likely not. The amusement park, too, existed, even though it’s doubtful that animals released from it have mutated into monsters.

But the Iceman? He is the outlier. His story is 100 percent true.

I live close enough to Clinton Road that I could probably make it there and back in a day. But even if the majority of the stories associated with it aren’t true, I definitely wouldn’t go there at night.

Something tells me this combination would get the best of me.

Clinton Road, New Jersey: The Most Terrifying Road in the US

A Killer of Many People and Many Ways