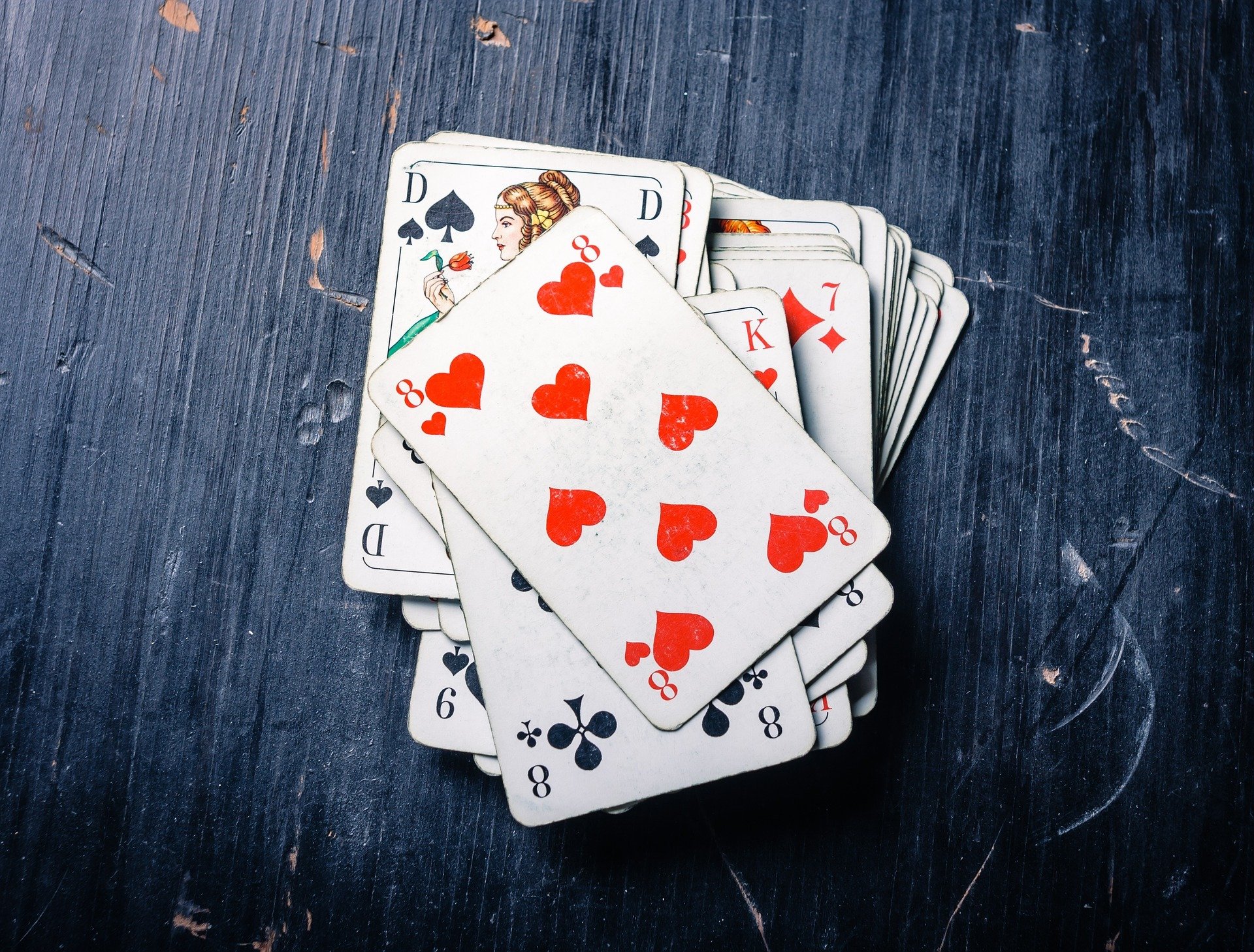 The rules for the supernatural gambling game known as the Wager Game can be found within the creepypasta “A Deck Of Cards,” written by Micah Rodney and published at the Creepypasta Wikia (under a CC BY-SA 3.0 Creative Commons license, as all Creepypasta Wikia submissions are unless otherwise noted) in early 2015. It’s absolutely a piece of fiction, so if you actually do attempt to play it, it’s likely that nothing will happen. Still, though — if you’re willing to suspend your disbelief, it’s a compelling setup — so for the curious, here’s a clarified set of rules organized into a set of step-by-step instructions for… well, maybe not easy gameplay, but… straightforward gameplay. Yes. That sounds about right. Do read the original story as well, though; it’s not just the rules — it’s also an account from a narrator who’s meant to have actually played the game.

(But also, please don’t actually play this game; depending on how it’s played, it can involve bringing harm to yourself or to others, which obviously we here at TGIMMM do not endorse. So, here’s your Breaking The Fourth Wall Reminder that This Is A Story and Should Not Actually Be Played.)

Something about the writing suggests, to me, that it’s the last option. For example, there’s a line in the story that reads, “If you’re wondering, I wouldn’t bother asking with anything less than an eight” — “eight” referring to playing a numbered card — with the narrator going on to note that what you can safely ask when you play a low numbered card only amounts to something innoccuous, like what tomorrow’s weather is going to be. This seems to imply that you can make a wager when you play a numbered card, but also that you don’t necessarily need to if you don’t want to.

Then, later on, the narrator states that most opponents “have a bit of an honor code” about how they play: “If they are able to, they will match you number for number” — that is, if you play an eight, they’ll also play an eight if they can, or at least a card close to eight. “Essentially, they try to make it worth your while,” the narrator says. “Make the answer you want equivalent to the damage you have to cause; you see?” I interpret this to mean that we’re dealing with a tit-for-tat situation — that, if wagers are made, then everyone gets what they wagered for at the end of a round, even if the cards played result in a tie. In this case, “winning” and “losing” aren’t defined by one person receiving a prize for playing a better card and the other receiving nothing for playing a weaker one, but rather by whether the price you had to pay for your prize was greater than, lesser than, or equal to the prize itself.

All of this is to say that that’s how things will work in the version of the rules put together below. However, that’s also just how I read between the lines of the story (and, admittedly, attempted to address some inconsistencies within the tale’s internal logic); there are other possible ways to interpret it — and no way to know which interpretation is correct.

Again, much of the haziness within the story is likely intentional. And that’s part of what makes the game so risky to play: There’s no way to tell whether you’re playing correctly or not.

There are other risks, too, though, of course. In terms of the level of danger involved, this one ranks quite highly, indeed.

The use of candles as the small source of light is permissible, but not ideal. Candles, you see, can go out quite easily — and although the game room should have only minimal illumination, you do not want to end up entirely in the dark.

Do not bring any food or drink with you into the game room.

Do NOT fail to remove the jokers from your deck of cards before playing.

The method your opponent uses to indicate which card they wish to play their turn may vary. You may witness the card in question move toward you, for example. You may hear a voice — in your ears, or in your mind — that tells you which one to turn over. You may even be handed the card outright, although if this occurs, it is not recommended that you continue playing.

If you play long enough that the deck runs out of cards to deal, you may, if desired, gather up the discard pile, shuffle it, and continue dealing from it. However, this is NOT RECOMMENDED and should be avoided if at all possible.

You may, however, play this game as many separate times as you like. Be aware, though, that your opponent may not always be the same; indeed, you may never play the same opponent twice.

Some opponents, you may find, are kinder than others.

Do not cheat. Not by accident — and certainly not intentionally.

Your wagers are, essentially, information. Knowledge. Things you wish to know. When you lay down a wager, you are asking for your opponent to impart that knowledge unto you.

Your opponent’s wagers are, essentially, pain — pain you must cause either yourself or someone else, whether physical, emotional, or both. When your opponent lays down a wager, they are naming the price you must pay for knowledge you have just gained.

Your opponent may not lie to you. They may not always know the answers to the questions you pose, but they will not deliberately mislead or deceive you when they reply.

You may not refuse to complete a task assigned to you through an opponent’s wager. You may tally them up to complete after the conclusion of the game, and you may carry out them out however you wish, but you cannot simply… choose not to do them. Failing to carry out a wager is akin to being caught.

Do not be caught.

See also: If You Are Caught.

The Cards And Their Functions:

The numbered cards, the aces, and each of the royal cards all have particular functions when played during a turn or round.

These functions are not always the same for the Principal as they are for the opponent.

There are also several individual cards which have specific functions differing from the rest of the cards within their grouping.

The functions of each of the cards is as follows:

The Two Of Clubs:

The Queen Of Spades:

The King Of Hearts:

Playing the Two of Clubs early in the game can be advantageous for the Principal. Knowing your opponent’s true nature may affect whether or not you choose to continue playing.

Choose when to make a wager carefully — as carefully as the wager itself. If you choose to play a low-numbered card, it may be advisable NOT to make a wager; if you do, you will be required to carry out the task assigned to you by your opponent’s wager — and the information you can safely acquire with a low-numbered card may simply not be worth the price of the wager. Experienced players recommend only making wagers if you are able to make it playing an eight or higher.

If your opponent meets an ace you played with another ace of their own, it may be an indication that they are at least somewhat benign. Doing so is, as some experienced players have noted, a relatively selfless act; they have, after all, freely given up a card that would otherwise have granted them the power to extract two wagers from you during a single turn. However, be wary — your opponent could also simply be attempting to lull you into a false sense of security.

Playing a king and following it up with a 10 as your second card is a sound strategy. Doing so will allow you to extract an answer from your opponent for your most valuable wager without having to pay the price of their wager in return — and, if you so desire, will allow you to put an end to the game immediately after you have collected this wager, as well. However, it is not recommended that you open — and then immediately end — the game with this move. Your opponent will not get the chance to play… and they may not like that very much.

Keep track of what’s been played, and what your opponent is likely to have their hand — if you can. Doing so may help you choose what to play, when to play it, and whether or not to make a wager.

But do not make any errors.

If you miscount — if you miscalculate — the consequences could be dire.

You could, for example, wind up on the run from your opponent.

But you might not always be able to escape them.

If You Are Caught:

Do everything you can to avoid it.

If you are caught… well, let’s just say that there are fates worse than death.