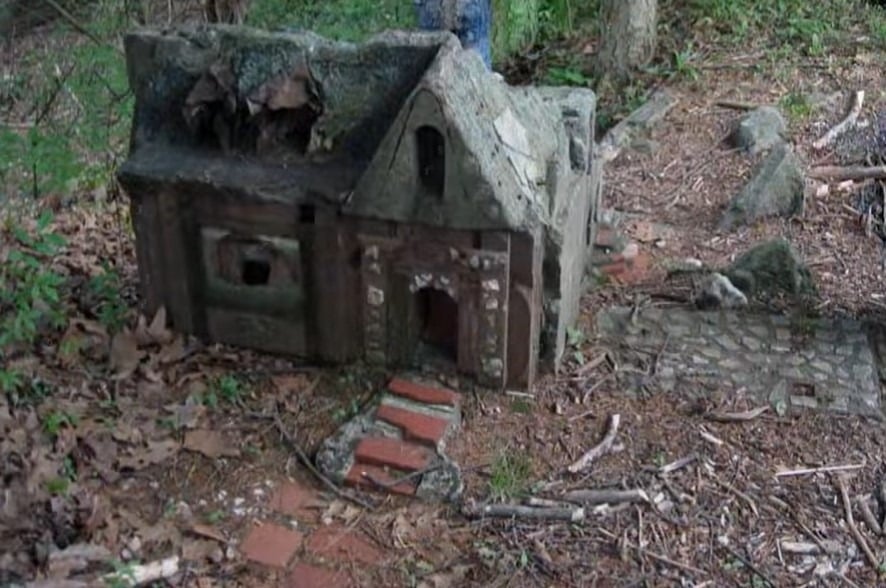 It doesn’t have an official address, so you might have a hard time finding it — and even if you did locate it, it’s on private property, so getting up close and personal with it is even less likely. But if you look closely in the woods off of Old Waterbury Road in Waterbury, Connecticut — just over the border from Middlebury — you might see it: The abandoned fairy village locals sometimes call the Little People’s Village.

In truth, it’s neither of those things. But its history, it turns out, is just as fascinating as the tales associated with it — even if it is all much more mundane than those stories might suggest.

I should probably note here that, as I began looking into the history of the Little People’s Village, I briefly debated covering it as a Haunted Road Trip piece, rather than an Abandoned one. When I’d first heard about it, it was only as an abandoned landmark — but as I started to dig deeper, I was surprised the find so many legends focusing on the diminutive ruins as a haunted or cursed location. Ultimately, it made more sense to me to keep the piece filed under Abanbdoned — but the argument could be made either way.

As both a feature on the fairy village published recently by Connecticut Magazine and a short article on the Middlebury Historical Society’s website detail, the tiny town dates back nearly a century. In 1924, William Joseph Lannen, who was originally from nearby Naugatuck, purchased a plot of land between Middlebury and Waterbury and built a gas station there. At the time, the move made sense; the newly-constructed fueling spot was right alongside one of the main routes between the two towns. (More precisely, it was on Middlebury Road, curving beneath Pine Rock and spitting out just south of what is now the intersection of Route 64, or the present-day Middlebury Road, and Route 63, also known as Straits Turnpike.) Plenty of traffic — and business — passed by the gas station regularly, and for a time, business boomed.

Alas, though, just four years later, a new route connecting Middlebury and Waterbury was built. Middlebury Road was straightened out — and when that happened, traffic diverted away from the old road, and thus from Lannen’s gas station. With its location no longer a prime spot, the fueling station became obsolete.

But Lannen soon found a new use for the site: He planned to open what’s referred to in both the Connecticut Magazine piece and the Middlebury Historical Society’s write-up as a “nursery” — presumably a garden nursery. Lannen planted all manner of greenery, from trees and shrubs to colorful flowers — but he didn’t stop there. He also started to construct small buildings out of brick, concrete, ceramic and metal. Tiny houses, miniscule churches, a toy-sized lighthouse, stairs, and even water pools — filled with raindrops, of course — soon nestled among the verdant landscape, lit up with newfangled electric lights and seemingly ready to welcome any minute residents who might be looking for a new home.

It’s not clear whether Lannen actually intended it to be a fairy village; early news coverage of his creation simply called it a “village” or a “toytown,” per the Middlebury Historical Society. It’s perhaps worth noting that miniature parks and model villages were coming into vogue both in Europe and North America at about the time that Lannen was building his tiny creation. They’re particularly tied to the UK; indeed, the oldest continuously open miniature village in the world, Bekonscot Model Village, is located in Buckinghamshire. Bekonscot opened in 1929, and has since gone on to inspire countless similar creations across the country. (If you’ve either seen Hot Fuzz or played Untitled Goose Game, you’ll be familiar with the concept of a British model village — the climactic scenes for both of these pieces of media occur in a model village.)

But several miniature parks in the United States predated Bekonscot — for example, Turnerville (later Tiny Town & Railroad) in Morrison, Colorado, which opened to the public in 1920, as well as Springfield, Missouri’s Tiny Town, which opened in its original form in 1919 and in its larger, more complete form in 1925. To me, this, combined with the fairy-free descriptions of Lannen’s town from the time during which he was building if, suggests that the Waterbury village was meant to be something more like a miniature park than a village with any sort of folkloric backstory, made-up or not.

However, Lannen never fully realized his vision. He got married in 1936 — to one Elizabeth Kennedy, also of Naugatuck — and apparently, by 1939, he had abandoned the former gas station, the miniature village, and the entire idea of starting a nursery. Connecticut Magazine and the Middlebury Historical society both mention newspaper articles about the village dated that year, with the Connecticut Magazine piece quoting a specific description of the place as “[looking] like somebody’s dream crumbling to dust.”

(I was unfortunately unable to gain access to the article or articles in question — my local library doesn’t have access to any databases that archive Nagatuck/Middlebury/Waterbury-area publications that far back, and subscriptions to resources like Newspapers.com and the Newspaper Archive are expensive  —so, alas, I can’t say whether the articles mentioned in both of these pieces are the same article. It may be, though; it seems unlikely to me that two local publications would both cover a decaying miniature village long past its prime in the same year.)

In need of steady work, Lannen took a job with the Connecticut Light & Power Company and left his tiny town for nature to reclaim. Lannen himself died in 1958 (I believe at the end of December, although again, I don’t have direct access to his obituary; I think it’s here, for whatever that’s worth), just after his former property was sold to a relative; then, in 1960, it was sold again. It remains privately owned today.

But in the decades since Lannen’s death, the ruins of his miniature village have taken on a mythic quality — and with it came a new moniker: The Little People’s Village — “little people,” “little folk,” and other similar terms being, of course, used across many cultures in reference to a broad range of folkloric creatures. In this case, most came to associate the abandoned tiny town in the woods of Waterbury with fairies.

The most benign story about the little village’s existence states that it was once a tourist attraction on the trolley line belonging to the Quassy Amusement Park in Middlebury. Supposedly called the Fairy Village, the attraction was meant to have presented to visitors a fairy abode, completed with “ornamental garden” and “fairy throne.” However, the trolley ceased operation sometime around 1930 — and with the line no longer running, the Fairy Village was said to have become lost to the forests of time. Literally.

But although the Quassy Amusement Park, which originally opened in 1908, did in fact have a trolley at one time — it was what was known as a “trolley park,” the precursor to the modern-day amusement park popular in the 19th and early 20th centuries situated at the ends of streetcar lines in many U.S. cities — the Waterbury fairy village was never part of its route. Quassy’s director of marketing, Ron Gustafson, confirmed it in no uncertain terms to Connecticut Magazine: “It was never associated with Quassy Amusement Park,” Gustafson said to writer Erik Ofgang before directing Ofgang to Robert Rafford, president of the Middlebury Historical Society.

Other stories connected with the village, however, are… darker. One tells of a married couple living in the area who become convinced not only that fairies reside in the forest near their home, but that these fairies won’t leave them be — unless, that is, they built for them a lavish town all their own. Under the fairies’ spell, they construct the village for them together, with the haphazard and unusual layout pointed to as proof of the otherworldly influence involved in the town’s creation.

In another telling, it’s specifically the wife who is plagued by the fairies. She conscripts her husband to build the village, with the final piece being the throne at its center.

Yet another legend, however, does away with the couple; instead, the unfortunate human at the center of the tale is a man who lives alone in a stone house in the woods. But the fairies are still present: They begin whispering to him, first at night, then during the day, then at all times, such that he can barely stand it. He builds the village for them in the hopes that it will quiet their voices once and for all.

But what all of these stories have in common is their tragic endings. They all end in the deaths of the humans — not by the hands of the fairies, but by their own. The couple die together, trapped in their home by the fairies who will not let them rest; or the wife, convinced that she has become the Queen of the Fairies, takes an axe to her husband in a rage when he sits upon her completed throne; or the husband, unable to take anymore of his wife’s increasingly unreasonable demands, takes an axe to her — or to himself, or to both of them; or the lone man, living on his own in the woods, can no longer stand the fairies’ whispering and solves the problem in the most drastic way possible.

The village itself is haunted by the souls of those who died because of its infernal influence, the stories say. And the throne? Why, it’s cursed, naturally; should you sit upon it, you’ll die within seven years to the very day you made that choice.

None of these stories is true, of course. The abandoned miniature village isn’t haunted, and fairies had nothing to do with its creation. Only a few structures remain, and those that stand are badly decayed. Oh, and the one, human-sized, “castle-like” stone structure with bars on what were once the windows? That’s not the house in which the doomed protagonists of the many legends lived; it’s just the last surviving bits of the garage of William Lannen’s gas station.

But there’s something about coming upon a tiny, shrunk-down version of something that suggests something supernatural — and given the weird and wild tales that persist about exactly what occupies Connecticut’s woods, it’s perhaps to be expected that something equally weird and wild would grow out of the whole thing.

The abandoned “fairy” village may not always be there; according to Robert Rafford speaking with Connecticut Magazine, the property on which the remains currently site might be purchased sometime in the future in order to facilitate the construction of a new interchange for Exit 17 off of I-84. But for now, it’s there — although it’s not advisable that you try to visit.

The place may not have been built for fairies… but it’s always possible that a few may have moved in sometime over the past few decades.

It’s just right for them, after all.