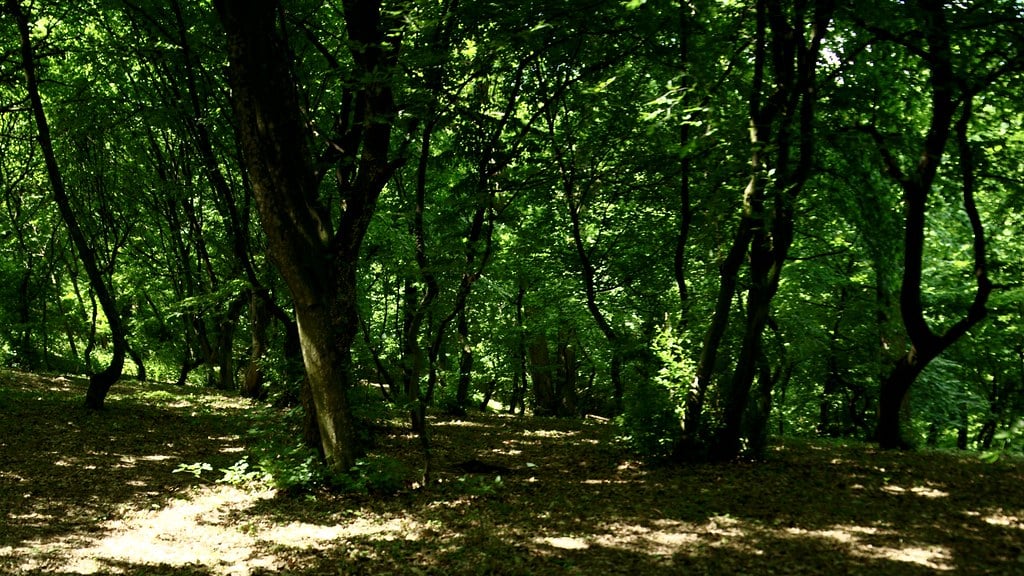 The Romanian city of Cluj-Napoca is fairly large, all things considered; these days, it’s the second most populous city in the country. But that’s not all it’s known for. Nor is its reputation limited to its substantial number of universities, or its vibrant youth culture, or its rapidly-growing tech and IT industry. Outside of Cluj-Napoca, you see, is Hoia Baciu — or, the most haunted forest in Romania, as it’s sometimes known. Hoia Baciu has also been called both Romania’s Area 51 and the Bermuda Triangle of Romania — and although neither comparison is a one-for-one match, the forest does have a few things in common with both locations: It’s though by some to be a hot spot for UFO activity, and while others make much of the rash of unexplained disappearances said to be connected to the forest.

You can easily visit Hoia-Baciu. You can even visit it at night, if you’re feeling brave.

But whether you should depends on how easily affected you are by unusual phenomena.

[Like what you read? Check out Dangerous Games To Play In The Dark, available now!]

The history of Cluj-Napoca, which is part of the central historical region of Romania known somewhat notoriously as Transylvania. dates back to the Neolithic period, but the beginning of the city as we know it today can be traced to the Roman Empire — the era of ancient Rome following the Roman Republic. During the emperor Trajan’s rule, the Roman Empire conquered Dacia in 101 AD and established the settlement of Napoca shortly thereafter.  Napoca was later granted municipium status, and still later colonia status; however, barbarian invasions forced the Romans to withdraw by 721, after which it lay uninhabited until the Middle Ages. Sometime during the 10th century AD, it came under Hungarian rule — and over the many centuries since then, Cluj-Napoca has changed hands numerous times, depending on which nation or regime had control of the region at any given point. (The 20th century has been a particularly tumultuous period for Romania; head here for more on the history of the country.)

Now a bustling economic center for Romania, Cluj-Napoca has a large amount of green space in and around the city, including a variety of parks, a botanical garden — and, of course, Hoia Baciu.

And it’s here that things start to get… interesting.

Hoia Baciu isn’t all spooks and scares; as Atlas Obscura notes, the 250-hectare forest is also “a perfectly pleasant recreation area,” with hiking and biking paths offering a refreshing respite from the city’s urban environment. But as of 1968, its public reputation has been that of the most haunted forest in Romania, thanks to a photograph taken of a specific area of the forest purporting to show a UFO.

The photographer was Emil Barnea, a military technician; the area of the forest, a section known as Poiana Rotunda — “the round meadow,” directly translated, but more commonly known in English as the Clearing, with a capital C. On Aug. 18, 1968, Barnea and several friends had gone hiking in the woods. They stopped for lunch in the Clearing — but when Barnea went off on his own for a few moments to look for firewood, he saw something shocking on his return: A metal object high in the sky, seemingly moving with intelligent motion. In the two minutes the object was visible, Barnea managed to take two photographs of it, one of which hit the newspaper circuit about a month later.

Although Barnea wasn’t terribly interested in “flying saucers,” as it were, that’s what the object looked like to him: A flying saucer.

Although naysayers claimed that Barnea had, at best, misinterpreted the appearance of a weather balloon and at worst faked the whole thing, it’s worth noting that Barnea had, as Sophie Buchan observed in the Independent in 2017, “nothing to gain from reporting the sighting, and everything to lose” — which Buchan cites as “what differentiates this story from other UFO claims.” As Buchan noted, “The Communist government equated a belief in the paranormal with madness and state-sabotage, and Barnea lost his job in a country which had no support for the sacked” — not exactly the kind of thing one would risk unless one were absolutely certain about what had happened.

Barnea’s story both launched Hoia Baciu into the public eye from a paranormal perspective and serves as one of the main reasons the forest is sometimes termed “Romania’s Area 51” (although as far as I know, no one is planning on storming Hoia Baciu,  so, uh… at least there’s that). It’s not, however, the only reason it’s been likened to the U.S. government’s infamous and mysterious military installation: A number of other UFOlogists and paranormal researchers have spent time studying Hoia Baciu and arrived at similar conclusions.

Sometime before Barnea went public with his photographs, for example, Alexandru Sift had claimed to have witnessed unusual events in the forest; when he began venturing into it regularly in the 1950s, he said that he had been followed by “a series of strange shadows” as he did explored, eventually photographing what he called “umbrellas.” In more recent decades, chemist Adrian Patrut, who was a friend of Sift, has also spent a substantial amount of time studying the forest, publishing the book Fenomenele de la Pădure Hoia-Baciu on the subject in 1995. Those who believe the forest to be a UFO hot spot have reported lights, objects, and geometric figures appearing in the sky or in photographs; indeed, some even believe that the reason the Clearing is… well, a clearing has something to do with a UFO having landed there at some point, killing all the vegetation and preventing anymore from growing.

There are other stories connected to Hoia Baciu, too, though — stories that account for the forest’s other reputation: That it’s the Bermuda Triangle of Romania. They have to do with people going missing after venturing inside. According to one tale, Hoia Baciu is actually named for someone who vanished from within it — a shepherd who went into the forest with 200 of his sheep one day and never returned. Neither he nor the sheep have been seen since. Another claims that a five-year-old girl disappeared into the forest once, only to reappear five years later looking exactly the same — she hadn’t aged a day. Some people who visit Hoia Baciu and do make it out of the woods claim to have lost hours of time, with no idea what occurred during the missing hours.

It’s these stories which have convinced some people that the forest contains some kind of portal — and, in some cases, convinced them that they might even be able to access it somehow. “Once when I came here, I found 60 people from Bucharest trying to open a gate into another dimension,” Hoia Baciu tour guide and project manager of the Hoia Baciu Project Alex Surducan noted in the Independent’s 2017 piece on the forest.

There might be ghosts in the forest, too. Some report having heard disembodied voices while inside, or seen glowing eyes — sometimes green, sometimes red — peering out at them from between the trees. Accounts talk alternately of black fog and white mist obscuring the path. Occasionally, apparitions might even appear — and if you don’t see them in person, you might find them in your photographs later on. Who might these ghosts be? It’s sometimes thought that they might be the souls of peasants murdered in the forest sometime in the past, possible in the Clearing itself — Romania’s history, after all, tends to be on the bloody side — although this theory remains unconfirmed.

Some visitors claim to have experienced unpleasant physical symptoms when inside the forest — nausea, anxiety, headaches, the feeling of being watched, rashes, and even burns and scratches. Electronic devices don’t always work; even Marius Lazin, who runs the Hoia Baciu Project with Alex Surducan (Lazin is its president), has noted according to the Paranormal Scholar that he has “experienced some troubles with electronic devices” — despite largely approaching the stories clinging to the forest with a healthy degree of skepticism.

And although it’s not often part of the larger Hoia Baciu story, it’s possible a cryptid of some sort might have taken up residence inside. Alex Surducan told Sophie Buchan of the Independent that that’s the reason he doesn’t camp out in the forest overnight if he can help it: The first time he did it, he and his friends kept hearing “a very loud hoof noise, like a horse or a particularly loud deer” tromping around outside their tent — but the noises would stop as soon as anyone stepped outside to see what was going on.

There is, unfortunately, very little documented evidence to support many of the tales, however. As Brian Dunning noted over at Skeptoid in 2016, a lot of Adrian Patrut’s work utilizes theories and fields of study that don’t have much, if any, legitimate scientific research behind them. There also don’t appear to be any historical documents confirming the tale of the missing shepherd or the vanishing five-year-old girl; indeed, in grand folkloric tradition, the details of these stories often even change depending on who’s telling it. (It some versions of the story about the little girl, for example, she reappears exactly the same as she was when she first disappeared; in others, she’s said to have been a little bit… off upon her return.)

And for my part, most of what I’ve found while digging into this whole thing are secondary sources recounting the things that are said to occur within the forest to those who choose visit — that is, when I’ve found first-hand accounts of visits, they largely don’t contain any strange phenomena. As Dunning observed about the lack of historical evidence, that doesn’t mean these kinds of sources aren’t out there — but in my experience, you’re generally more likely to encounter people talking about what they’ve heard others have experienced in the forest than what they’ve actually experienced themselves.

Still, though — the tales of Hoia Baciu are enough to keep people coming to see it for themselves. If you’re curious and what to take the chance yourself, the Hoia Baciu Project runs guided tours both during the daylight hours and at night; you’ve got your choice of short tours running between two and three hours, the standard tour running four hours, and an extended tour option that will take you for a maximum of seven hours. You’ll hear stories and legends about the forest, see some of the uniquely-shaped trees growing in the forest, and take a trip to the Clearing.

Take some photographs, if you can.

But be careful you don’t take anything home with you by accident.

When it comes to locations like these, it’s usually best to leave everything just how you found it.

[Photos via Swithun Crowe (1, 2)/Flickr, available under a CC BY 2.0 Creative Commons license.]